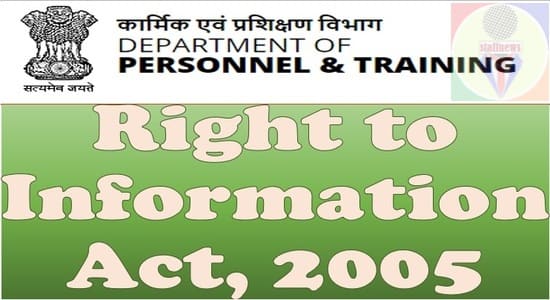 No: 1/34/2013-IR (Pt.)
Government of India
Ministry of Personnel, Public Grievances and Pensions
Department of Personnel and Training
IR Division

The undersigned is directed to invite attention to the Guidelines issued by this Department vide OM No.1/6/2011-IR dated 15.04.2013 which were reiterated on 07.11.2019 with slight modification on implementation of suo motu disclosure by all Public Authorities (PAs) under Section 4 of the RTI Act and subsequently carrying out the third party audit of their proactive disclosure.

3. This department is in receipt of multiple requests from different Public Authorities seeking relaxation/clarifications in respect of provisions related to third party audit of proactive disclosure in implementation of the Section 4 of the RTI Act on account of substantial difference in audit cost charged by different auditing training institutes, shortage of manpower/adequately trained man-power, pre-engagement of the training institute with its scheduled training activities etc.

4. The issue has been examined in view of the difficulties being faced by the Public Authorities in undertaking the third party audit of their proactive disclosures in terms of guidelines dated 07.11.2019 and it has been decided that the task of undertaking transparency audits may be given to any Government Training Institutes by Ministry/Department /Public Authority, under the Central or State Governments.

5. Accordingly, all the Ministries/Departments are requested to take appropriate action and ensure that the above instructions are communicated to their Attached and Subordinate Offices/PSUs/Public Authorities for wide implementation and compliance in order to carry out the third party audit of their proactive disclosure. All the above referred OMs are accessible at www.dopt.gov.in — Notification – OMs& Orders — RTI.

The Secretary to all Ministries/Departments of Govt. of India