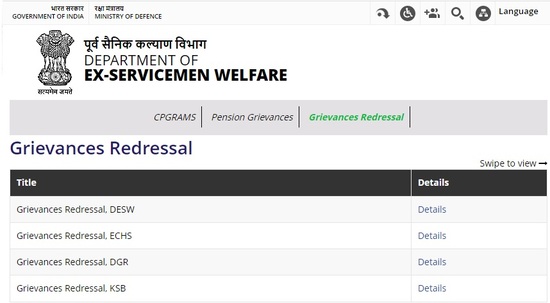 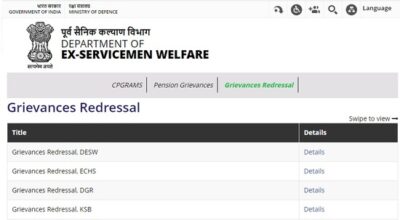 Department of Ex-Servicemen Welfare, in respect of grievance redress, this Department entertains grievances exclusively of the Ex-Servicemen and their family members on issues ranging from grant, rectification and revision of pension/ family pension/ disability pension, facilities under ECHS, land allotment from state governments, benefits being extended under schemes of DGR and KSB, other issues related to civil life of ESM etc. These grievances are being received, directly, though online mode (centralised grievance redress mechanism portal (pgportal.gov)), through e-mails, dak, over phone and other means of communications. Some of the grievances are also received through the office of Parliaments’ Committees on Petitions, Raksha Mantri/Raksha Rajya Mantri, Members of Parliament, Prime Minister’s Office, Cabinet Secretariat, President Secretariat, Department of Pension and Pensioner’s Welfare, National Human Rights Commission, Department of Administrative Reforms & Public Grievances, Secretary (Defence), Secretary (ESW). An officer of the rank of Joint Secretary is the Nodal Officer for redressal of these grievances.

Each of the grievance is examined in the Department at the first stage, then forwarded to the concerned authority (Service Headquarters, Records Offices, Pension Sanctioning Authorities, ECHS, DGR, KSB, State Governments, Pension Disbursing Agencies etc) for taking necessary action and then is followed up (through modes of online, e-mail, letters and phone calls), individually, till disposal/ redressal of the grievance. In the process of grievance redressal services of local network of the KSB is being extensively utilised.

Name & Contact No. for queries related to ECHS smart Card

Gen. ECHS est wef 01 Apr 2003 and providing comprehensive medical care to ESM and their dependents through polyclinics and empanelled hospitals. Central Organisation ECHS is Central HQ at Delhi and Regional Centres are est all over India for co-ordination and functioning of the Scheme. Being not a stand alone scheme, the Comd & Control is channelized through various Stn HQ/ Sub Area HQ / Area HQ / Comd HQ / Army HQ and DGAFMS. Like all other schemes and orgs, the Scheme is also having some shortcomings and the beneficiaries are facing problems. Our attention is, therefore, focused on the grievances redressal mechanism to alleviate the rising problems by forming a Grievance Cell at Central Organisation ECHS by employing a retd Army Medical Officer (rank of Col) who has been associated with ECHS in various appointments like Director (Medical), Commanding Officer Military Hospital and Senior Executive Medical Officer (SEMO) at Central Organisation ECHS under Director (Complaints & Legal) to look into the grievances and monitor redressals and assist the functionaries of Central Org ECHS in resolving the issues raised by the beneficiaries

Following types of complaints/ grievances are generally received at his HQ:-

(a) Against the Functionaries.

(b) Eligibility and ECHS Card.

3. Manner of Receipt of Grievances/ Complaints.

Clientele satisfaction will always be our motto. Our constant endeavours will be on to redress the grievances of ECHS beneficiaries and every functionary will take it as a contributory responsibility to resolve the issues raised.