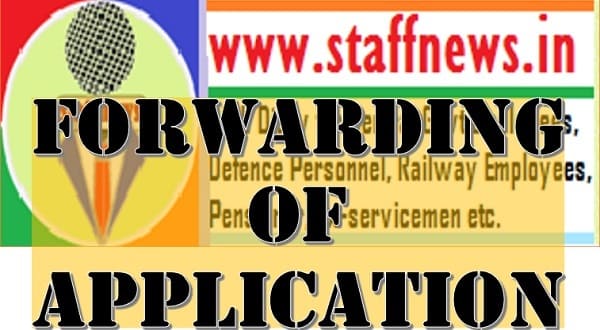 Forwarding of Application of Government servants for outside employment: Information Document by DoP&T

Forwarding of Application of Government servants for outside employment: Information Document by DoP&T

This Department has issued various instructions from time to time regarding forwarding of applications of Government servants for outside employment. It is now decided to consolidate all such instructions at one place for better understanding and guidance. They are as under:

These guidelines relate to forwarding of applications of Government servants as direct recruit for posts within the Central Government, State Governments, Autonomous/ Statutory Bodies, CPSEs etc. It may be noted that in a case in which a particular employee cannot be spared without serious detriment to important work in hand, public interest would justify withholding of his application even if otherwise the application would have been forwarded. It may be added for information that where for good and sufficient reasons an application is withheld no infringement of any Constitutional right is involved.

a. The Heads of Departments should interpret the term ‘public interest’ strictly and subject to that consideration, the forwarding of applications should be the rule rather than an exception. Ordinarily, every employee (whether scientific and technical or non-scientific and non-technical personnel) should be permitted to apply for an outside post even though he may be holding a permanent post.

b. No distinction need be made between applications made for posts in a Department under the Central government, Autonomous Bodies or sub-ordinate offices, posts under the State Governments, posts in Public Sector Undertakings owned wholly or partly by the Central Government or a State Government and posts in quasi-Government organizations. They should all be treated alike so far as the forwarding of applications is concerned. If, however, a Government servant desires to apply for a post in a private concern, he should submit his resignation or notice of retirement, as the case may be, before applying for private employment.

3. GENERAL PRINCIPLES FOR DEALING WITH SUCH APPLICATIONS

The general principles to be observed in dealing with such applications are as under:

b. Applications from permanent Government servants – Both permanent non-scientific and non-technical employees as well as permanent scientific and technical employees could be given four opportunities in a year to apply for outside posts, except where withholding of any application is considered by the competent authority to be justified in the public interest. A permanent Government servant cannot justly complain of hardship or harsh treatment if his application for any other post or employment is withheld.

c. Applications of Government servants who have been given some technical training at Government expenses after commencement of service – Such Government servant cannot justifiably complain of hardship if he is not allowed to capitalize the special qualifications so gained by seeking other better employment. Withholding of application in such a case is therefore justifiable.

4. PROCEDURE TO BE FOLLOWED IN THE CASE OF THOSE WHO APPLY FOR POSTS IN THE SAME/ OTHER CENTRAL GOVERNMENT DEPARTMENTS/ STATE GOVERNMENT/ AUTONOMOUS BODY/ CENTRAL PUBLIC SECTOR ENTERPRISES ETC.

a. Applications from Government servants for employment elsewhere, submitted otherwise than in response to advertisement or circulars inviting applications, should not be forwarded.

b. The applications may be forwarded in accordance with the general principles given in preceding paragraphs, irrespective of whether the post applied for in the other department/office is permanent or temporary.

e. Permanent Government servants on their being selected for appointment in an autonomous Body/ CPSE will have to resign before they are permitted to join the new organization. In their case no lien shall be retained and they will be governed by the orders issued by Department of Pensions & Pensioners’ Welfare regulating mobility of personnel between Central Govt. and Autonomous Bodies/ CPSEs etc.

f. The Terms of the bond need not be enforced in the cases of those who apply for appointment elsewhere, other than private employment, through proper channel. However, the obligations under the bond would be carried forward to the new employment. An undertaking to this effect may be obtained from the Govt. servant before he is relieved.

a. Where Government servants apply directly to UPSC/SSC as in the case of direct recruit, they must immediately inform the head of their Office/Department giving details of the examination/post for which they have applied, requesting him to communicate his permission to the Commission directly. If, however, the Head of the Office/Department considers it necessary to withhold the requisite permission, he should inform the Commission accordingly within thirty days of the date of closing for receipt of applications. In case any situation mentioned in para 6 below is existing, the requisite permission should not be granted and UPSC/SSC should be immediately informed of this fact as also the nature of allegations against the Government servant. It should also be made clear that in the event of actual selection of Government servant, he would not be relieved for taking up the appointment, if the charge-sheet/prosecution sanction is issued or a charge-sheet is filed in a court for criminal prosecution, or if the Government servant is placed under suspension.

b. It may be noted that in case of direct recruitment by selection, i.e., “selection by interview”, it is the responsibility of the requisitioning Ministry/Department to bring to the notice of the Commission any point regarding unsuitability of the candidate (Government servant) from the vigilance angle and that the appropriate stage for doing so would be the consultation at the time of preliminary scrutiny, i.e., when the case is referred by the Commission to the Ministry/Departments for the comments of the Ministry’s representatives on the provisional selection of the candidate for interview by the Commission.

c. When once the Administrative Authority has forwarded an application, it is mandatory that the Government employee concerned should be released to take up the new appointment. However, where subsequent to the forwarding of the application, but before selection if exceptional circumstances arise in which it may not be possible to release the official, the fact should be communicated to the Commission as well as to the official concerned. The decision not to release an official should be taken only where the circumstances referred to above are really exceptional.

6. CIRCUMSTANCES IN WHICH APPLICATION SHOULD NOT BE FORWARDED

Application of a Government servant for appointment, whether by direct recruitment, transfer on deputation or transfer, to any other post should not be considered/ forwarded, if:

(ii) disciplinary proceedings are pending against him and a charge sheet has been issued; or

(iii) sanction for prosecution, where necessary has been accorded by the competent authority; or

(iv) where a prosecution sanction is not necessary, a charge-sheet has been filed in a Court of law against him for criminal prosecution.

(v) where he is undergoing a penalty — no application should be forwarded during the currency of such penalty.

(b) When the conduct of a Government servant is under investigation (by the CBI or by the Controlling Department) but the investigation has not reached the stage of issue of charge-sheet or prosecution sanction or filing of charge-sheet for criminal prosecution in a court, the application of such a Government servant may be forwarded together with brief comments on the nature of allegations and it should also be made clear that in the event of actual selection of the Government servant, he would not be released for taking up the appointment, if by that time any of the situations in (a) above arises.

8. In case any reference to the relevant OM is required, the same may be accessed by clicking the hyperlink given below: