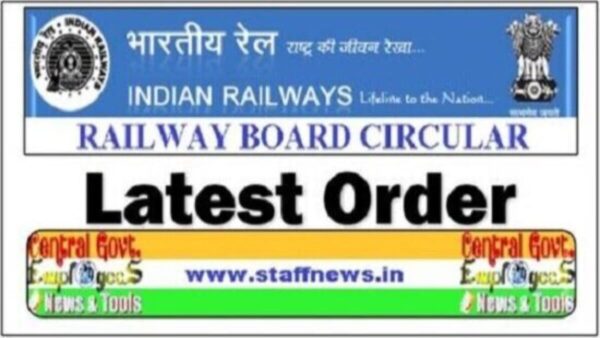 Grant of leave to Probationary Officers for appearing in any Examination(s): Railway Board Order

Grant of leave to Probationary Officers for appearing in any Examination(s): Railway Board Order dated : 20.12.2022

Sub: Grant of leave to Probationary Officers for appearing in any Examination(s).

In supersession of all the instructions issued from time to time by the Railway Board on the matter of grant of leave to railway probationary officers for appearing in examination(s), it has been decided with approval of the competent authority that –

2. All the selected candidates immediately on reporting at the respective Central Training Institute (CTI) to join as probationary officers, shall have to necessarily give a declaration on the date of joining regarding their intention of appearing in any examination. There will be two options for giving such declaration, one of which has to be necessarily filled up by all the candidates:

3. On reporting back after availing EoL, the candidates who had opted for option 2(i) above, shall have to necessarily fill in the Declaration ‘B’ as per 2(ii) above, as EOL will be granted only once. In case, they do not give this declaration, it will be taken that they are no more interested in Railway service and will not be allowed to join and their services would be terminated following due procedure.

4. EOL shall be granted by the Head of the CTI concerned. For this purpose, there shall be no need to make any reference to Board.

5. In case a probationer who has been granted EoL as per 2(i) above and he/she fails to join at the end of one year EoL, it will be taken that they are no more interested in Railway service, and his/her services would be terminated following due procedure.

7. The probationer who has appeared for any examination and joins the training with the next batch and is subsequently selected for any other service will have their regular training suspended and they be utilised by the CTI concerned in projects that can be completed within the period.

8. In case of a probationer availing EoL or any other kind of leave, his/her probation period shall be extended by such period as may be necessary, subject to the condition that the total period of probation does not exceed double the prescribed period of probation under any circumstances.

9. CTI concerned shall ensure that every probationer on reporting to the concerned CTI, is informed of the above instructions, under their clear acknowledgement and the necessary declarations as per the choice exercised by the probationers are obtained on the date of joining itself.

10. These instructions shall be applicable from CSE-2021 Exam batch and onwards.

11. This issues with the concurrence of the Finance Directorate of the Ministry of Railways.