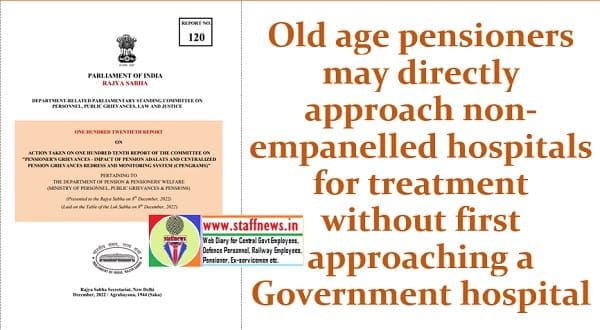 ONE HUNDRED TWENTIETH REPORT
ON
ACTION TAKEN ON ONE HUNDRED TENTH REPORT OF THE COMMITTEE ON
“PENSIONER’S GRIEVANCES – IMPACT OF PENSION ADALATS AND CENTRALIZED
PENSION GRIEVANCES REDRESS AND MONITORING SYSTEM (CPENGRAMS)”
PERTAINING TO
THE DEPARTMENT OF PENSION & PENSIONERS’ WELFARE
(MINISTRY OF PERSONNEL, PUBLIC GRIEVANCES & PENSIONS)

2.12 The Committee notes that despite favorable decision of apex Court in a number of cases, all the expenditure incurred by a beneficiary of Central Government Health Scheme on his or her treatment in non- empanelled Private Hospitals should be reimbursed to the beneficiary, the Government has not yet issued any general instructions in this regard and the pensioners/beneficiaries have to approach the Court of law for justice by spending a lot of money and time. The Committee believes that rules and procedures are just a means to achieve a larger goal i.e. welfare of pensioners and they should not become an end in themselves. Strict adherence and conformity to norms, rules and procedures might lead to a situation where strictly following these norms, rules and procedures instead of being means, become ends in themselves which create stumbling blocks in achieving mandated objectives/ends. The Committee is of the view there may be exigencies when the old age pensioners may directly approach non- empanelled hospitals for treatment without first approaching a Government hospital. They should not be deprived of their rightful entitlements under any circumstances. The Committee recommends the Department to play a pro-active role and pursue the matter with the Ministry of Health and Family welfare.

2.13 The Committee also recommends the Department to seek details of action taken by the Ministry of Health and Family Welfare on the judgments of the Apex Court in this regard and furnish them to the Committee in its Action Taken Replies. (3.19)

2.14 Inter-departmental consultations with Ministry of Health & Family Welfare will be held in this regard.

2.16 The Committee takes note of the reply. The DPPW is expected to pursue the matter actively with the Ministry of Health & Family Welfare. 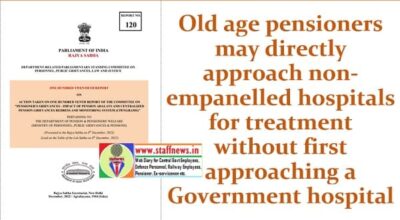