I am directed to convey the approval of the President of India for payment of Productivity Linked Bonus for the accounting year 2012-2013 equivalent of emoluments of 60 (Sixty) days to the employees of Department of Posts in Group `D`,Group `C` and non Gazetted Group `B`. Ex-gratia payment of Bonus to Gramin Dak Sevaks who are regularly appointed after observing all appointment formalities and adhoc payment of Bonus to Casual labourers who have been conferred Temporary Status are also to be paid equivalent to allowance/wages respectively for 60 (sixty) Days for the same period.
1.1              The calculation for the purpose of payment of Bonus under each category will be done as indicated below.

2.1       Bonus will be calculated on the basis of the following formula:-

Average TRCA  X  Number of days of Bonus
———————————————-
30.4 (Average no. of days in a month)
3.2      The allowances drawn by a substitute will not be counted towards Bonus calculation for either the substitute or the incumbent Gramin  Dak Sevaks. In respect of those Gramin Dak Sevaks who were appointed in short term vacancies in Postman/Group `D` Cadre, the clarificatory orders issued vide Directorate letter No. 26-6/89-PAP dated 6.2.1990 and No.  26-7/90-PAP dated 4.7.91 will apply.
3.3      If a Gramin Dak Sevak has been on duty for a part of the year by way of a fresh appointment, or for having been put off duty, or for having left service, he will be paid proportionate ex-gratia Bonus calculated by applying the procedure prescribed in Para 3.1
3.4        Those Gramin Dak Sevaks who have resigned, discharged or left service on or after 1.4.2012 will also be entitled to proportionate ex-gratia Bonus. In case of all such Gramin Dak Sevaks, the Ex-gratia Bonus admissible will be as per provisions of Para 3.1 above.
3.5      In case of those Gramin Dak Sevaks who were under put off duty or on whom dies non was imposed, or both during the accounting year ,the clarificatory orders issued vide Para 1 & 3 respectively of this office order No. 26-8/80-PAP (Pt I) dated 11.6.81 and No. 26-4/87-PAP (Pt II) will apply.

Full Time Casual Labourers (including Temporary Status Casual Labourers ) who worked for 8 hours a day, for at least 240 days in a year for three consecutive years or more (206 days in each year for three years or more in case of offices observing 5 days a week) as on 31.3.2013 will be paid ad-hoc Bonus on notional monthly wages of Rs.1200/- (Rupees Twelve Hundred only)

The maximum ad-hoc Bonus will be calculated as below:-

The above rate of Bonus per day may be applied to the number of days for which the services of such casual labourers had been utilized during the period from 1.4.2012 to 31.3.2013. In case where the actual wages in any month fall below during the period 1.4.2012 to 31.3.2013 the actual monthly wages drawn should be taken into account to arrive at the actual ad-hoc Bonus due in such cases.
5.         The amount of Bonus /Ex gratia payment /Adhoc Bonus  payable under this order will be rounded to the nearest rupee. The payment of Productivity Linked Bonus as well as the ex-gratia payment and ad-hoc payment will be chargeable to the Head `Salaries` under the relevant Sub –Head of account to which the pay and allowances of the staff are debited. The payment will be met from the sanctioned grant for the year 2013-2014.
6.         After payment, the total expenditure incurred and the number of employees paid  may be ascertained from all units by Circles  and consolidated figures be intimated to the Budget Section of the Department of Posts. The Budget Section will furnish consolidated information to PAP  Section about the total amount of Bonus paid and the total number of employees (category-wise) to whom it was distributed for the Department as a whole.
7.             This issue with the concurrence of Integrated Finance Wing vide their diary No. 156/FA/13/CS dated .4th October, 2013 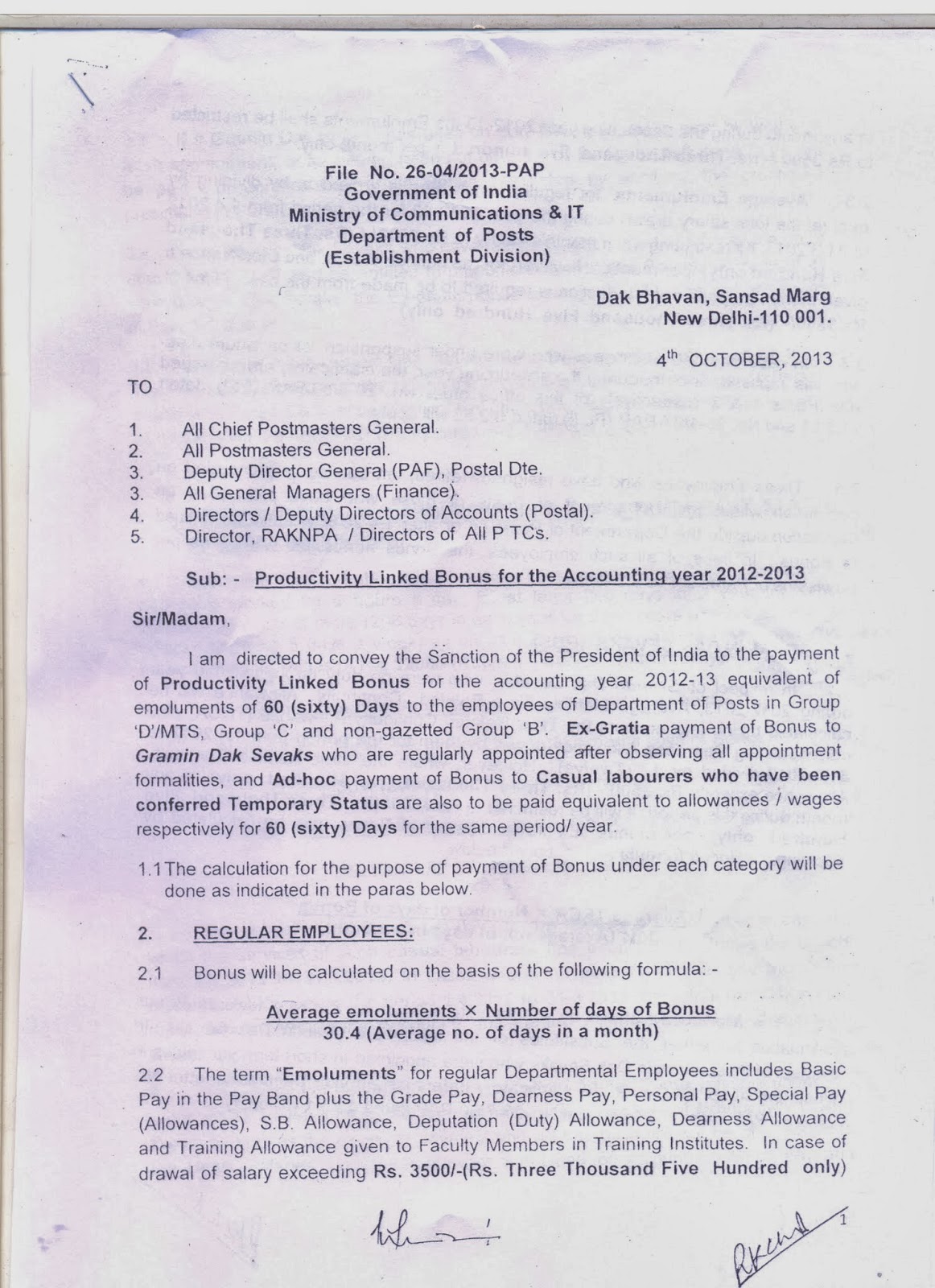 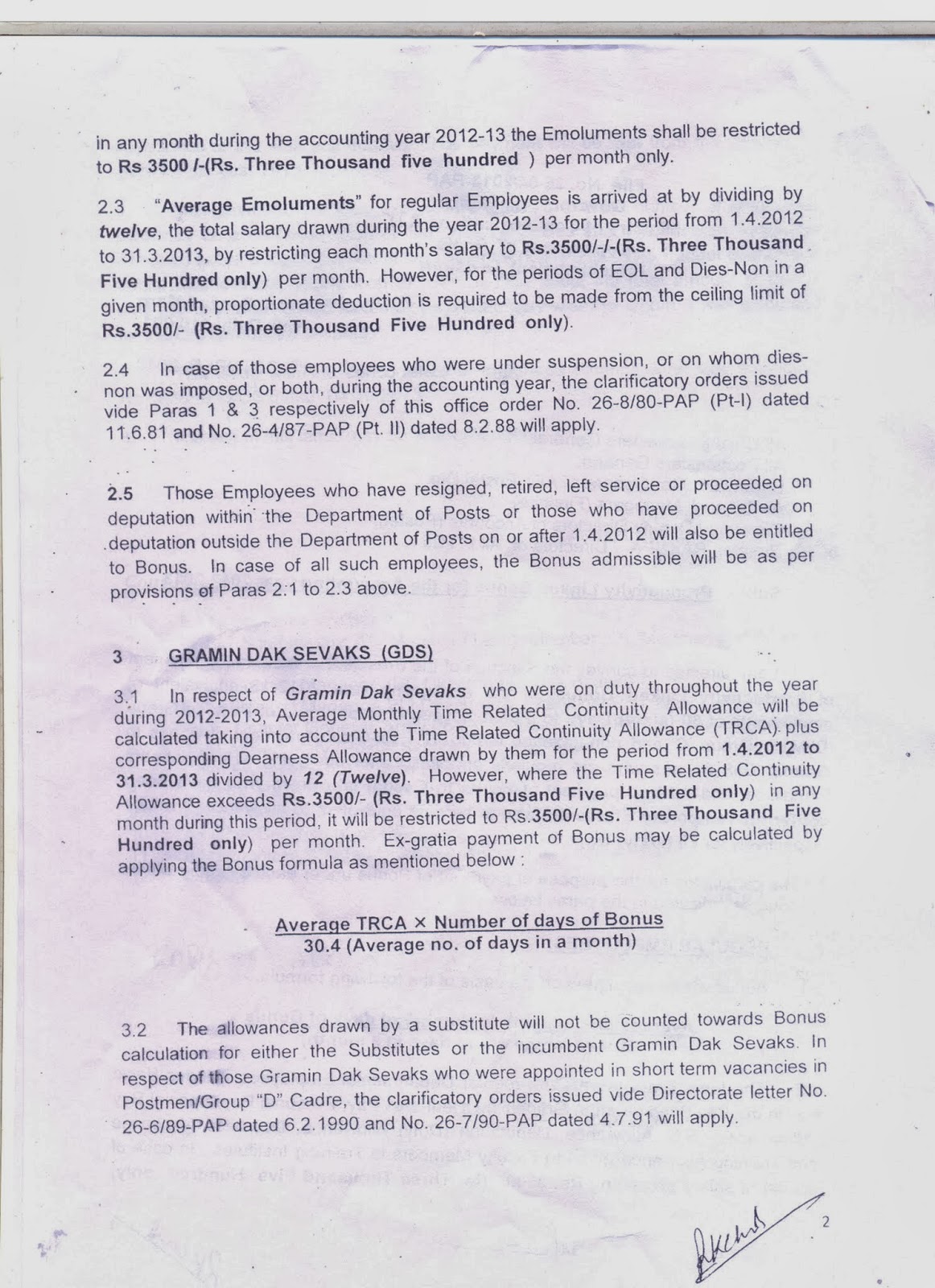 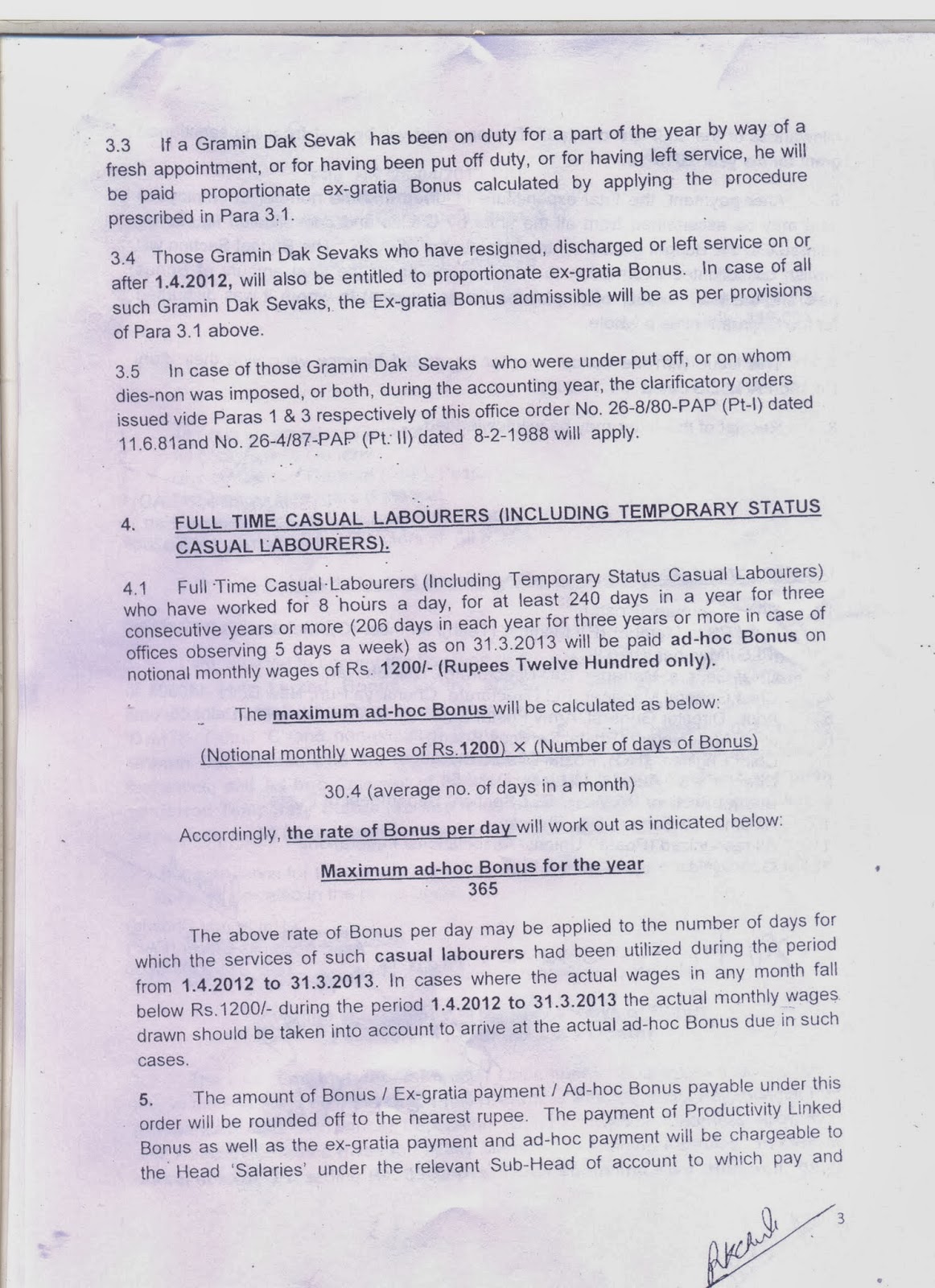 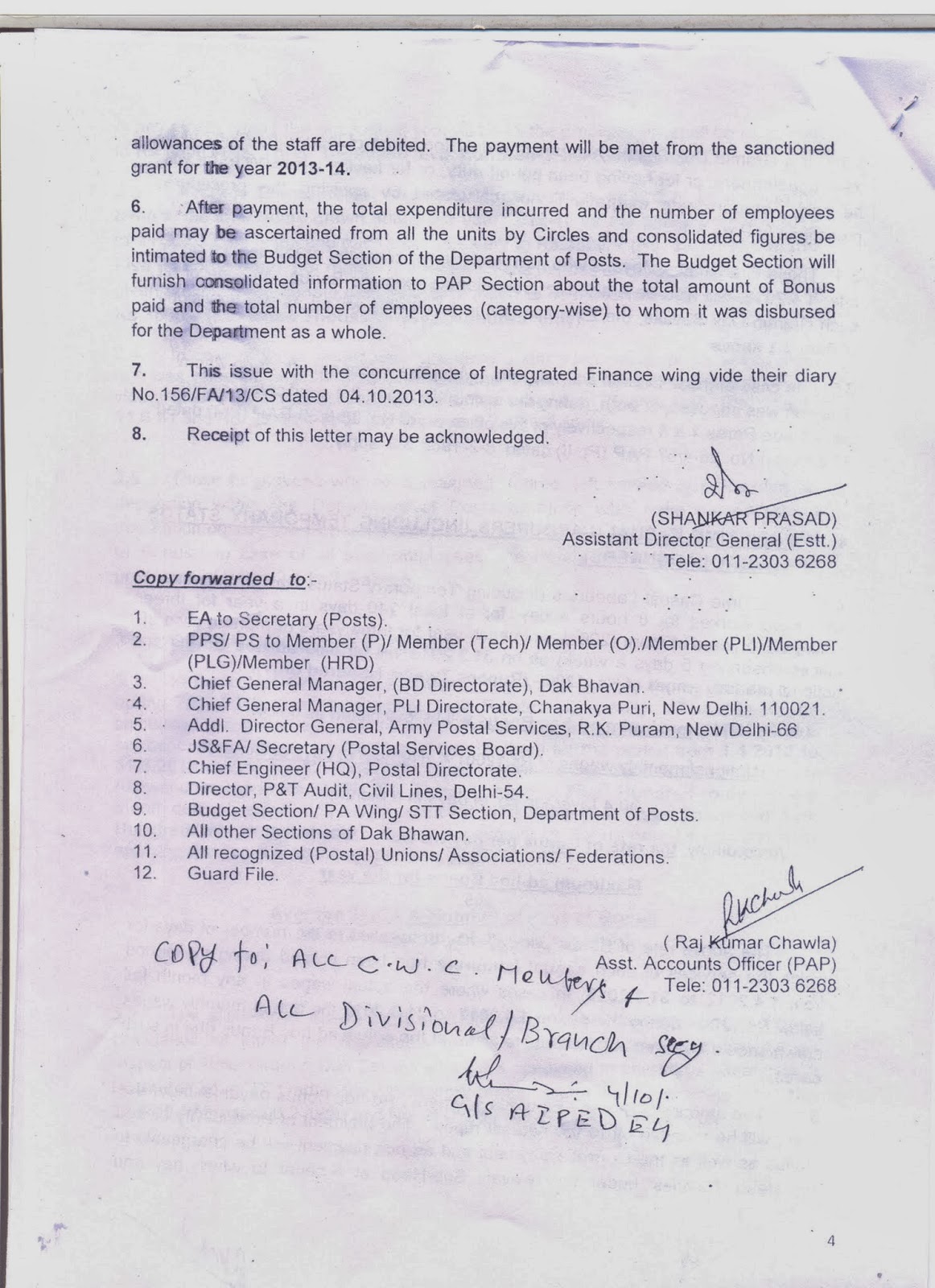