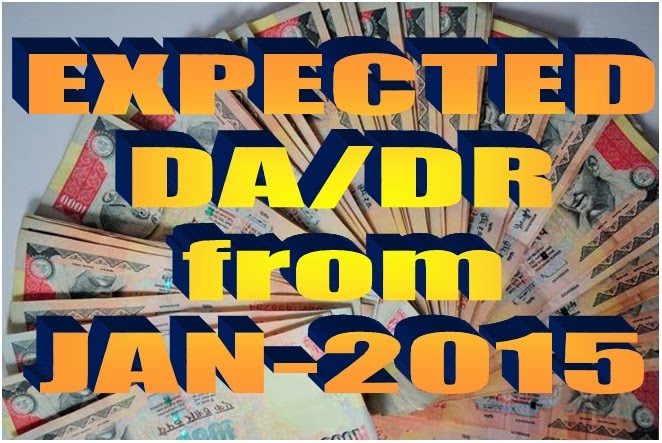 Expected DA/DR is now entered in 4th  step.  All India Consumer Price Index Number (AICPIN) for Industrial Worker is
remained stationery at 253 (two hundred and fifty three). Estimation of 113% with 6% increase in expected DA/DR for Central Govt Employees/Pensioner is also stationery as previous month October-2014.   CPI-IW for next two months is yet to be announced.   Following table showing that estimation of 113% is constant with 6 points’ increase in CPI-IW index and with 3-4 point decline in next couple months speculate 112% of future DA/DR.  Therefore most probability is showing
6% increase in future DA/DR for Central Govt. Employees/Pensioner.  With this we must to wait for next month’s Index for CPI-IW.  See the table of Expected DA/DR given below:

The All-India CPI-1W for October, 2014 remained stationary at 253 (two hundred and fifty three). On l-month percentage change, it remained static between September, 2014 and October, 2014 when compared with the rise of 1.26 per cent between the same two months a year ago.
The largest upward pressure to the change in current index came from Miscellaneous group contributing (+) 0.28 percentage points to the total change. At item level, Wheat, Wheat Atta, Arhar Dal, Potato, Green Coriander Leaves, Lemon, Guava, Tea (Readymade), Snack Saltish, Cigarette, Firewood, Primary & Secondary School Fee, Private Tuition Fee, Toilet Soap, Tailoring Charges, etc. are responsible for the increase in index. However, this increase was restricted to some extent by Coconut Oil, Onion, Apple, Banana, Cauliflower, Gowar Phali, Tomato, Sugar, Medicine (Allopathic), Petrol, etc., putting downward pressure on the index.
The year-on-year inflation measured by monthly CPI-1W stood at 4.98 per cent for October, 2014 as compared to 6.30 per cent for the previous month and 11.06 percent during the corresponding month of the previous year. Similarly, the Food inflation stood at 4.48 per cent against 6.46 per cent of the previous month and 15.02 per cent during the corresponding month of the previous year.
At centre level, Munger Jamalpur reported an increase of 12 points followed by  Goa (11 points), Srinagar (7 points), Giridih and Sholapur (5 points each) and Coonoor (4 points). Among others, 3 points rise was observed in 10 centres, 2 points in 9 centres and 1 point in 5 centres. On the contrary, Chhindwara recorded a decrease of 5 points. Among others, 3 points fall was registered in S centres, 2 points in 5 centres and 1 point in 16 centres. Rest ofthe 21 centres’ indices remained stationary.

The indices of 37 centres are above and other 41 centres’ indices are below national average.

The next index of CPI-1W for the month of November, 2014 will be released on Wednesday, 31 December, 2014. The same will also be available on the office website www. labourbureau.gov.in.
(S.S. NEGI)
DIRECTOR

Loading...
Newer Post
Foreign tours/travels as part of Training Programmes – approval of Screening Committee of Secretaries (SCOS)
Older Post
One Rank One Pension: No Budget was allocated for the purpose in the Budget 2013-14