Government officials may get to claim LTC for domestic helicopter flights 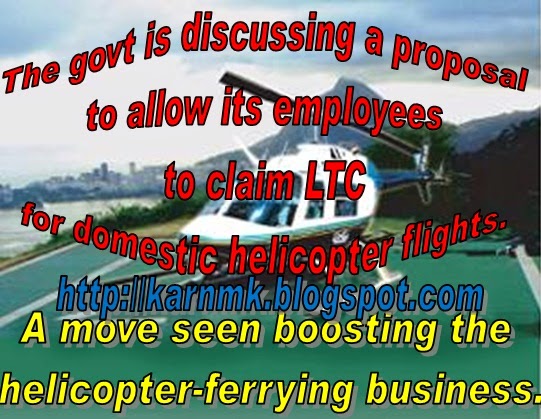 NEW DELHI: The government is discussing a proposal to allow its employees to claim leave travel concession for domestic helicopter flights, a move seen boosting the helicopter-ferrying business.
At present, central government employees can claim leave travel concession (LTC) only for using scheduled commercial airline flights, preferably Air India. According to a civil aviation ministry official, the Department of Personnel and Training (DoPT) had sought a cost analysis of helicopter rides in the country.
“We have sent our analysis to the DoPT on the cost of flying in a helicopter. They had asked for it since they plan to bring helicopter rides under the LTC scheme,” the official, who did not wish to be named, told ET. The helicopter industry has welcomed the proposal, which aims to extend the travel concession to some 3 million central government workers.
“It creates business for helicopter operators in the country. Currently, helicopter operations are available in areas that have difficult terrain and no other means of connectivity, as helicopter rides are expensive,” said Harsh Vardhan Sharma, treasurer at Business Aircraft Operators’ Association and owner of Himalayan Heli Services Ltd, a helicopter operator.
“The rides are expensive because there is less demand. A move like this would increase volumes that will bring down fares in the affordable category.” According to Sharma, helicopter fare for the Katra-Mata Vaishno Devi Shrine ride has come down by half mainly due to volumes.
“During peak season, helicopter operators ferry about 1,000 people a day that comes down to about 800 a day during non-peak season between Katra and Mata Vaishno Devi Shrine. This had led to a 50% fall in fares from its high fare days,” Sharma said.

Loading...
Newer Post
Meetings Schedule of 7th Pay Commission with Union/Association
Older Post
Promotion in the various grades of CSS – clarifications in respect of officers on mandatory training regarding