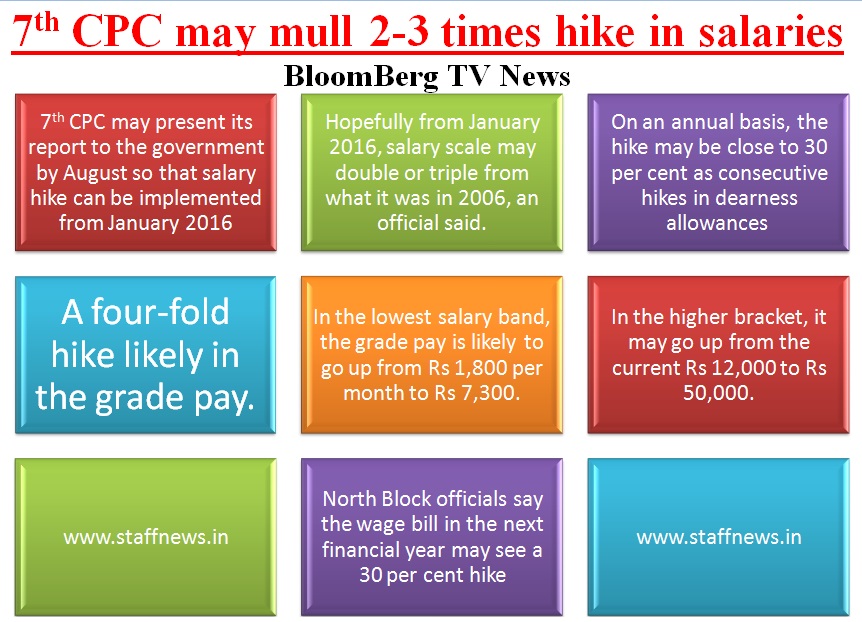 The Seventh Pay Commission may present its report to the government by August so that salary hike can be implemented from January 2016
New Delhi: The Seventh Pay Commission may recommend a 2-3 times hike in government salaries from 2006 levels, a move which may spread cheers among civil servants but increase the stress on the fisc.
Sources told Bloomberg TV India that Seventh Central Pay Commission (CPC) was considering mega give-away to the government employees. When the government implements the CPC mandate hopefully from January 2016, salary scale may double or treble from what it was in 2006, an official said.
On an annual basis, the hike may be close to 30 per cent as consecutive hikes in dearness allowances has already raised the salary levels of government staff.
Sources said there is likely to be a four-fold hike in the grade pay. In the lowest salary band, the grade pay is likely to go up from Rs 1,800 per month to Rs 7,300. In the higher bracket, it may go up from the current Rs 12,000 to Rs 50,000.
Historically, government salaries have almost trebled in every decade. The sixth CPC suggested 3 times increase in salaries from that of fifth CPC levels–it was 2.6 times for lower grade officials and slightly above three times for higher grade staff. The increase in salary during fifth CPC was 3-3.5 times the fourth CPC levels.
The previous UPA government set up the Seventh CPC headed by Justice AK Mathur in February 2014 and promised to implement the salary hike from January 2016. The Narendra Modi government may stick to the January deadline. The Seventh CPC may present its report to the government by August, sources said.
North Block officials say the wage bill in the next financial year may see a 30 per cent hike on the back of Pay Commission recommendation, throwing up a huge challenge in the face of the fiscal consolidation roadmap.
In the case of the sixth CPC, the government expenditure increased by about Rs 22,000 crore during FY09—Rs 15,700 crore on the general budget and Rs 6,400 crore on the rail budget. Arrears amounting to Rs 18,000 crore were distributed in two years—40 per cent in FY09 and 60 per cent in FY10.
The fiscal implication of sixth CPC coupled with fiscal stimulus in the form of higher spending and tax cuts after the Lehman crisis, doubled the Centre’s fiscal deficit to 6 per cent in FY09 and from less than 2.7 per cent in FY08.

Loading...
Newer Post
Representations against APAR endings/adverse remarks
Older Post
Grant of option for switching over to VI CPC (Pay Band & Grade Pay) from the date subsequent to the date of grant of third promotion