Trade unions eyed Rs 15,000 per month minimum wage as national baseline One of the key issues on which the negotiations between the governm

Calculation of Minimum Wage – Chapter V of NC, JCM (Staff Side) memorandum to 7th CPC
Review of NPS, Minimum Wages, Fitment Formula -Willy nilly attitude of Government on pending issues: NC(JCM) writes to Cabinet Secretary
सातवें वेतन आयोग पर नवभारत टाईम्स की खबर: यूनियनों की हड़ताल वापसी के संकेत
Trade unions eyed Rs 15,000 per month minimum wage as national baseline
One of the key issues on which the negotiations between the government and the 10 central trade unions that had called for a general strike on Wednesday broke down was that of minimum wages. A labour ministry document circulated amongst the trade unions days before the strike, argued that by current norms, prices and calorific needs, Rs.6330 per month is the monthly wage adequate for an unskilled worker with a wife and two small children.
The trade unions and various other federations that represent 15 cr workers had demanded Rs.15,000 per month minimum wage as a national level floor wage. Striking a generous posture, the government modestly increased its proposal to Rs.7098 per month.
What the government had proposed was less than half of what was demanded. This was one of the contributory factors to the breakdown of negotiations. Other demands of the workers included social security coverage, non-interference with existing labour laws, etc.
How did the government calculate their proposal? A look at the fine print shows a slew of gross under-estimations and the use of an archaic formula first spelled out way back in 1957. Some of the food items’ prices are far from reality. For instance dal is costed at Rs.65 but only one of the various dals in the market – chana or gram dal – comes in this range. Arhar (tur) is Rs.135 per kg, urad is Rs.117.5, masur is Rs.95. All these current retail prices are from the consumer affairs ministry’s price monitoring data spanning 81 cities and towns. 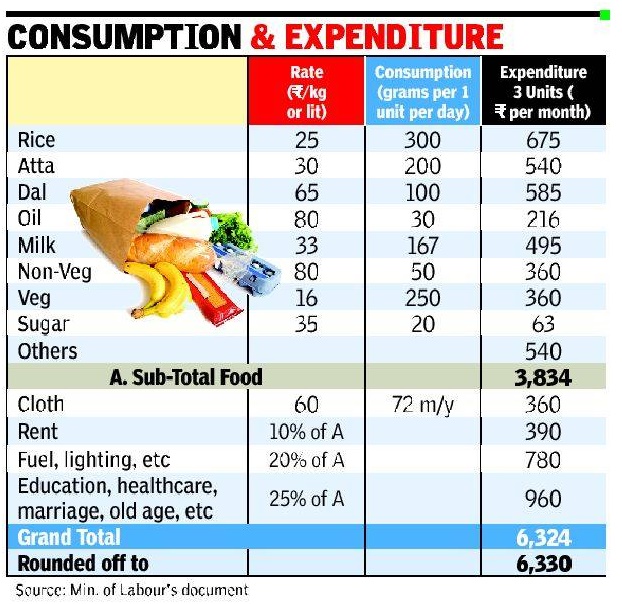 Mutton is priced at a bizarre Rs.80 per kg, although it doesn’t really matter because only 50 g is allowed. This is convertible to 250 grams of vegetables which are priced at an imaginary Rs.16 per kg. In the real world mutton is selling at anywhere between Rs.300 to Rs.400 per kg. And rarely if any vegetable sells at Rs.16 per kg.
But the real rub comes in the non-food items. Just Rs.390 is supposed to be spent on rent every month. And, fuel for cooking and utilities like electricity etc. are all supposed to be covered under a meagre Rs.780.
All education, medical expenses, marriages, care of elderly, recreation etc. is lumped together and costed at 25 percent of the food expenditure. This practice started after the Supreme Court in a landmark judgement in 1991 directed as much saying that if such a minimum wage cannot be guaranteed then the managements have no right to run their business. But even this works out to a mere Rs.980 per month.
Costs of education and healthcare have risen tremendously in the past several years and even one major episode of sickness in the family would be devastating. The government’s wage calculation seems to be blissfully unaware of this. 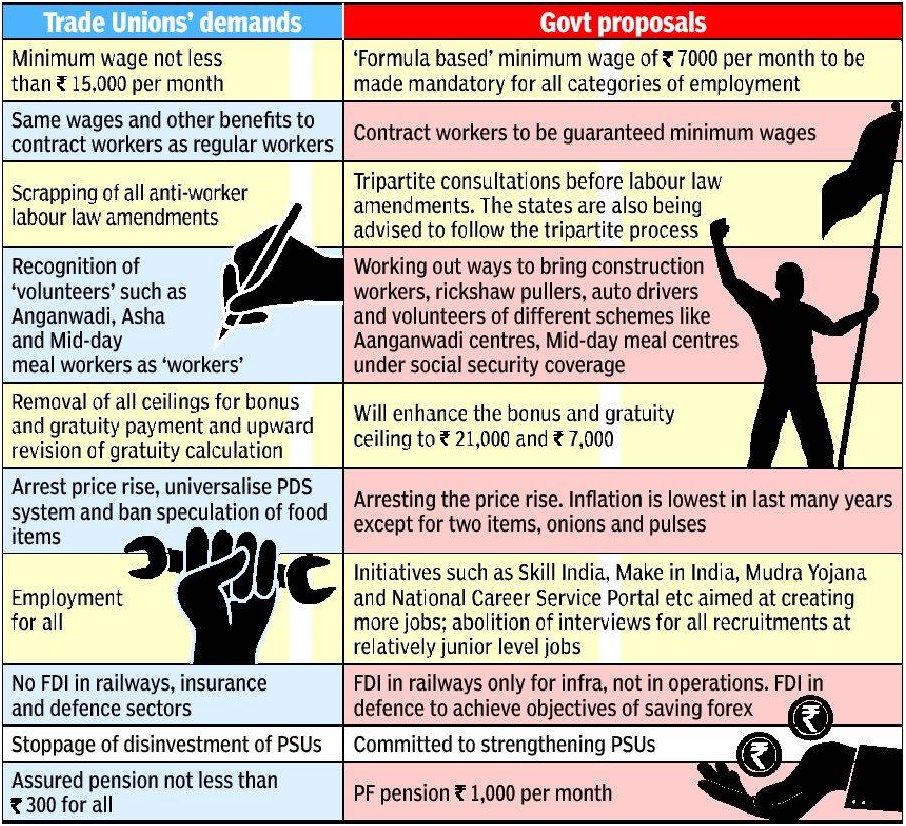 Recent government data shows that real wages, that is, after adjusting for inflation are dipping while the share of wages to profits is also dipping in the organized sector. In the unorganized sector which employs over 90 percent of India’s workforce, wages are abysmally low and conditions of work onerous. Small wonder then that the trade unions were unwilling to accept the government’s proposals.
Read at Times of India