Kiran Kumari 2 November 15, 2015 6:36 pm
7th Central Pay Commission (CPC): Issues and Expectations
Every ten years, the Central Government of India sets up a Central Pay Commission (CPC) to revise the pay scales of its employees. Since these pay scales are largely adopted by state governments as well, they influence the income of millions of households.
During 2013, time seemed to be running out for the constitution of the next Commission before the beginning of the election cycle. But on September 25, 2013, a week before the election-related Code of Conduct became effective, the government set up the Seventh Central Pay Commission. This commission will review and revise the salary and pensions of 50 lakh (5 million) or more Central Government employees. Now that it is constituted, the Commission will most likely be able to implement its recommendations by the scheduled date of January 1, 2016.

On Feb 28, 2014, the Cabinet approved the terms of reference of the 7th CPC. The CPC is expected to suggest a merger of 50% of DA (daily allowance) with basic pay, which would increase the gross salary of Central Government employees by around 30%. The Cabinet has approved an additional 10% DA over the existing 90% admissible DA, effective January 1, 2014. This increase would be paid in cash after the disbursement of March salary. The 7th CPC is required to submit its recommendation within a year and a half of its date of constitution.

Major issues to be resolved

1. Pay Parity between IAS & other government services: Hundreds of letters are sent by IAS officers to the concerned government officials apprehending that the seventh central pay commission may try to restore parity between different government services in terms of compensation and career progression. It is to be seen how 7th CPC and government deals with this crucial issue.
2. Pay parity with private sector: Central services have demanded to every pay commission to create parity with the officers of private sectors and make their salary structure comparable to later.
3.Retirement age: There is no denial of the fact that working efficiency of an employee is influenced by the increasing age but experience often weighs heavily over the age factor. Even then looking at attitude of present government impression is clear that pay commission is signaled to reduce the retirement age of government employees. Whatever circumstantial indications are available it shows that either 33 years of service of 60 years of age (whichever is minimum) is likely to be recommended. If media reports have ant substance of truth, under performers may be asked to opt for voluntary retirement after reaching the age of 55 years.
4.Pay gaps between least & highest paid employees: In 1947, gaps in salary between lowest and highest paid government employee was in the 1:41 ratio that got reduced to 1:12 by subsequent pay commissions. It has to be observed whether this gap is widened or reduced by the 7th CPC.
5. Continuing with grade pay system? It would be interesting to note whether 7th CPC continue grade pay system or adopts old pay scale system. As per reliable sources, grade pay system will not longer exists in 7th CPC structure. A table is circulating in the media predicting projected pay scales believed to be suggested by 7th CPC.
Members of the Seventh Central Pay Commission
Chairman – Ashok Kumar Mathur (Former Supreme Court Justice and Former Chairman, Armed Forces Tribunal)
Full time member – Vivek Rae (oil secretary)
Part time member – Rathin Roy (Director, NIPFP)
Secretary – Meena Agarwal (OSD, Department of Expenditure)

The Pay Commission Process
Implementation of a Pay Commission’s recommendations always leaves behind a few anomalies for the next commission to resolve. Making recommendations for pay revision is a long process, involving discussion with various organizations, submission of demands by representatives of unions and associations, and evaluating the potential financial impact of these demands on the national exchequer. Representatives of various organizations are asked to make presentations. The Pay Commission examines service conditions, pay, and perks given to employees.
All the earlier Commissions set up to revise the pay of Indian Central Government employees—except the 6th CPC—took more than three years to submit their report. The Sixth Pay Commission submitted its report within just eight months. Nevertheless, such a quick turnaround cannot be taken for granted for future Pay Commissions, since the timing of report submission and the nature of the recommendations are influenced by political and economic considerations.

What are the hottest rumors?

1. Central Government is willing to merge 50% DA with basic pay with effect from 1.1.2015 – All Govt. employees would be happy if it has happened,
2. Age of Retirement will be determined based on completion of 33 Years of service or at the age of 58/60/62/65 Years (depending on existing retirement age in various departments) whichever is earlier.
Latest update

Rationale for the Seventh Pay Commission

The constitution of the Seventh Pay Commission is justified for the reasons listed below.
Other expected tasks for the 7th Pay Commission include resolving anomalies created by the 6th CPC and addressing bonuses and problems related to the new pension program. All sections of employees will get an opportunity to present pay-related problems to the new Pay Commission and request redress of their grievances.
A new demand gaining support is constitution of a National Pay Panel that will make recommendations for all employees of the country. Since most of the states have adopted for their own employees the pay structure suggested by the 6th CPC for Central Government employees, uniform recommendations would remove discrimination between state and central employees. Recommending a uniform wage structure for each and every employee of India would also reduce pay disparities between private, public and autonomous organizations.
My poll indicates that 39% believe that Central Government employees are likely to get a threefold raise in salary. This is consistent with what was done in the past by earlier pay commissions. Given the existing trend in DA increase, salary may increase 2.3 times by the implementation date of the 7th CPC. Projected pay scales under this assumption are shown below.

Projected Pay Scales (After Implementation of the 7th CPC) 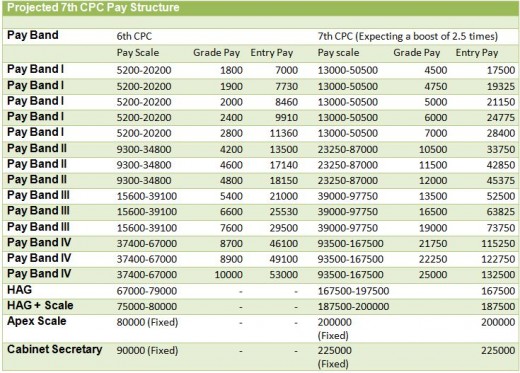 A projection based on media report is reproduced below. However, a fake report in the name of 7th CPC is also being circulated in the media by some miscreants. 7th CPC has been granted extension by the Govt. of India to submit it report by the end of December 2015. It would be clear after the submission of report by 7th CPC what content it has submitted to the ministry for acceptance. Further, each and every point in the report will be examined by the cabinet and approved after considering all the implications. Till then enjoy and go through the speculations made by experts.
A better way to get rid of corruption in public life than across-the-board increases would be to legalize a commission on services by each and every employee. This would also help improve the productivity of private sector employees. In some private or autonomous banking institutions, for example, employees are paid a reasonable percentage for accomplishments such as encouraging customers to open more accounts.
Wage revision is expected for Central Government employees effective January 1, 2016. The newly constituted Pay Commission will get two years to review the existing wage structure and suggest a new one, to meet the expectation of employees, and also to increase efficiency at work at a pace with the growth in the economy.
The Seventh Pay Commission needs to introduce more parity into the pay structure of various sectors. Employees in all departments have been vested with more responsibilities, but their pay structure still belongs to the British period. People serving in the police and armed forces have very low salaries although their duties have become enormously more challenging. Government should increase the compensation to its officers for any service-related casualty. Police forces working under adverse conditions and in remote areas must be paid high wages and good benefits so that more people join these organizations.
The new pension system implemented based on the recommendations of the 6th CPC needs to be revisited and reviewed by the 7th CPC, since the adequacy of fund management depends on market forces and the capabilities of fund managers. The 7th Pay Commission needs to take some vigorous action, based on discussions with trade unions, to come out with a more amicable solution for the new pension scheme.
These are some of the things people genuinely expect from the government, but time will tell how much people get from the CPC.