Kiran Kumari 2 November 15, 2015 6:33 pm
7th pay panel’s draft report riddled with dissent notes
The notes argue that it will widen the talent base available to govt to deliver increasingly complex services to a demanding population
Subhomoy Bhattacharjee |  New Delhi
The seventh Pay Commission’s draft report to determine the new salary structure for the 5.5 million civil servants in the central government has got riddled with several dissent notes. The notes, mainly about bringing in parity between the top-ranked Indian Administrative Service (IAS) and the specialised central services, argue that it will widen the talent base available to the government to deliver increasingly complex services to a demanding population.
But the dissensions could exacerbate differences at the top of the bureaucracy in the Government of India, already reeling from the impact of pay-related problems for the retired armed forces personnel who have demanded ‘one rank one pension’.
“There is a strong case for considering talent in the government rather than remaining confined to limited choices within some cadres,” former expenditure secretary Dhirendra Swarup told Business Standard. Swarup is one of the few non-IAS officers who became secretaries in the government, under former finance minister Jaswant Singh.
The notes are also a first for the Pay Commissions, set up every 10 years by the central government to revise the pay and allowances of central government employees. In the fifth Pay Commission, economist Suresh Tendulkar had put in a dissent note but it was on a macro theme suggesting a pruning of the bureaucracy and relating wages to performance.
But this time the notes reflect the sharp differences that have come up among the different cadres of government services about their pay and promotion avenues. There is a larger issue here. All the services taken together make up fewer than 150,000 people within the central government tasked with a mammoth level of administrative responsibility for a country of 1.3 billion people. So, frustrations among them could have far-reaching repercussions. 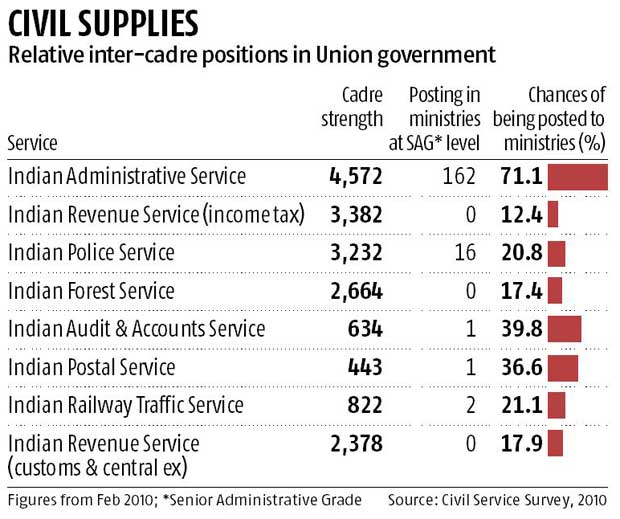 These men and women operate in a rigidly differentiated world through an appointment system that places them in cadres. The cadres almost mirror the caste differences in the larger society. The top-most cadres are the all-India services that include the IAS, Indian Police Service and Indian Forest Service. Of them, the IAS are the most numerous, at 4,572 according to the Civil Survey Report of 2010, written by former cabinet secretary, K M Chandrasekhar. Below them are about 45 cadres clubbed as central civil services, which include the IFS, IA&AS and IRS.
The impact of this pecking order came out in the open recently in the list of empanelled officers for the post of 60 additional secretaries. These posts rank just one notch below that of the secretaries, who function as heads of department or ministries in the government. Of those empanelled, only three (railways, income tax and audit & accounts services) were from the non-all India services. Swarup said the numbers were even lower than those until the 1990s, when there were at least five non-IAS officers in the central government ministries. At joint secretary and senior levels, positions up to those of secretaries (senior administrative grade) in central ministries, the share of other services is minuscule when compared with IAS. Yet, this is where policies are shaped.
At the heart of the difference is a two-year increment offered to IAS officers when they join vis-a-vis other cadres. Since seniority within the government is decided on pay scale, the higher start assures these officers of a higher position at each grade. But as the IRS officers and others in their representations have pointed out, this makes it impossible for them to compete for additional secretary and secretary posts in the ministries.
But Chandrasekhar counters it saying officers from most non-IAS services have enough options to be promoted within their services. “There is need for both specialists and generalists in the civil services. The Indian government is a massive structure that demands many different skill sets”.
To correct some of the problems, the 2010 report had suggested setting up of a Central Civil Services Authority for officers from all the services after they completed 13 years of service.
Each officer would get to choose an area of specialisation for the rest of their career. It has not been implemented so far.
The report of the Pay Commission, headed by Ashok Kumar Mathur, a former judge of the Supreme Court, was held up due to Bihar Assembly polls. The commission was given a four-month extension in August. Besides Mathur, the others in the commission are Vivek Rae (IAS) as full-time member, besides part-time members Meena Agarwal (Indian Railway Accounts Service) and Rathin Roy, director, National Institute of Public Finance and Policy (NIPFP). The commission is attempting to paper over some of the differences before the report goes to Finance Minister Arun Jaitley. The commission did not respond to requests for an interaction on the contents of the report.
The differences have become so sharp that social media platforms like WhatsApp have been flooded with often derogatory comments from opposing cadres about each other, a first of sorts. But both Swarup and Chandrasekhar held that such comments might not be serious enough to test the smooth functioning of the officers from different services when they were posted together.

Read at: Business Standard
Stay connected with us via Facebook, Google+ or Email Subscription.