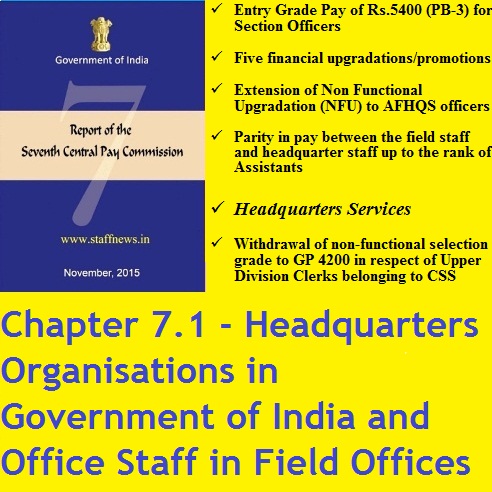 7.1.1 The headquarters organisation comprises the Secretariats of the ministries and departments of the Government of India. Most of the middle level posts
are held by the officers of Central Secretariat Service as also a few administrative posts at the senior level. In the Ministry of Railways, similar
positions are held by the Railway Board Secretariat Service, in the Ministry of Defence they are held by the Armed Forces Headquarter Service and in the
Ministry of External Affairs the same are held by the Indian Foreign Service (B) officers.
7.1.2 The organisational hierarchy of all the headquarter services by and large includes the following levels with corresponding GP:
7.1.3 The headquarter services provide a permanent bureaucratic set up which assists in establishment and administration, policy formulation and monitoring
and review of the implementation of policies/schemes of various ministries and departments.

7.1.4 The pay related demands of various headquarter services are as follows:-
a) At least five financial upgradations/promotions in the promotional hierarchy, at regular intervals have been demanded: time bound promotions at 5, 9, 13
years of service to CSS officers after they reach Group ‘A,’ on the same pattern as that given to Officers of the Group `A’ services and in case
promotional posts are not available, non-functioning pay upgradation to the next promotional grade. These demands have been made on the grounds that it
will attract a talented pool in the CSS at the entry level as well as create motivation for the serving officers.
Analysis
and
Recommendations

The Commission notesthat the MACP scheme by its very nomenclature is intended to provide assured career progression so that government employees do not stagnate. The
Commission is recommending continuance of the existing MACP Scheme. As regards the grant of time bound promotions at 5, 9, 13, 17 years to CSS officers
on the analogy of Group `A’ Services, this cannot be accepted as the entry level induction of CSS is in Group `B’ and therefore it cannot be compared
with Group `A’ Services.
b) Demand has been made for entry Grade Pay of Rs.5400 (PB-3) for Section Officers on the ground that there must be one pay for one post in a cadre and
that the minimum residency period of eight years in the grade is very long. Similar demands have been received from the Stenographers cadres too.
Analysis
and
Recommendations

7.1.5 The CSSS/AFHQSS consists of the following grades:
7.1.6 The demands of CSSS and AFHQ Stenographers Service are:
a) Merger of headquarters services with their counterparts in the Stenographer cadre with full parity and uniform designation and introduction of Executive
Assistant Scheme. In the justification for merger, the recommendation of the VI CPC vide paras 3.1.10 to 3.1.12 have been referred to, where the Commission
observed inter-alia, that there is no justification for maintaining a distinct Stenographer cadre in any government office. Instead, emphasis should be on
recruiting multi skilled personnel at Assistant level to be designated as Executive Assistants who will discharge the functions of present day Assistant
besides performing all the Stenographic functions. The VI CPC had justified the need for a unified cadre and common recruitment on the basis of assumption
that secretariat functioning would become more IT oriented in future reducing reliance on personal staff. The CSSS and AFHQSS officers’ Associations have
raised demands relating to merger of present incumbents of CSS/AFHQCS and CSSS/AFHQSS with full parity and uniform designation.
The DoPT has referred to propose EA scheme to this Commission.
Analysis
and
Recommendations
The issue has been deliberated in DoPT several times. Reports of the discussions indicate that although the CSS Associations are strongly opposed to such
merger between CSS and CSSS, they are not averse to introduction of the Executive Assistant Scheme. The DoPT itself appears to have not found it feasible
in view of the nature of work, duties and responsibilities of the members of CSS and CSSS being different.
In view of the fact that several detailed deliberations have already taken place in DoPT as well as in the meeting of the COS on 1 March, 2013 wherein
various aspects of the scheme have been examined threadbare in presence of all the stakeholders, the issue of merger of CSS and CSSS cadre remains an
administrative reform issue to be dealt with by the administrative Ministry. The Commission is making no recommendation in this regard.
b) A demand has been received regarding provision of promotional channel to the grade of Joint Secretary in CSSS stating that such creation is essential to
bring full parity (in grade) between CSS and CSSS. It has also been argued that this would ensure career progression for PSOs, who have no promotional
avenues even after completing five or more years of approved service in the grade.
Analysis
and
Recommendations

As regards demand for in-situ promotion of PSO to the rank of Joint Secretary and demand for creation of the post of JS for removal of stagnation and
career progression of CSSS Cadre beyond the level of PSO is concerned, it is stated that these issues are purely administrative in nature and can be dealt
with through the process of cadre review. Hence, the Commission is making no recommendation in this regard.
c) A demand for creation of additional posts in the grade of Sr. PPS (GP 7600) and PPS (GP 6600) has been received on the ground that these additional
creations will facilitate smooth merger of present incumbents of CSSS and CSS.
Analysis
and
Recommendations

Thedemand for creation of additional posts in the grade of Sr. PPS and PPS is linked to the demand of cadre merger, hence it is for the cadre controlling
authority i.e., the DoPT to decide the issue in its entirety.
d) The AFHQSS has demanded grant of two increments at par with CSS/CSSS at the time of promotion from GP 6600 to GP 7600 for parity.
Analysis
and
Recommendations
The
Commission finds no merit in continuation of two increments for CSS/CSSS and hence recommends abolition of the same.