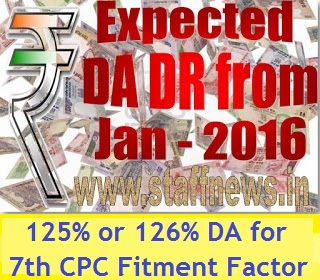 As per Labour Bureau  Press Release the All-India CPI-IW for November, 2015 increased by 1 point and pegged at 270 (two hundred and seventy).  From this increase the Expected Dearness Allowance from Jan, 2016 is confirm to stand at 125%, but the AICPI Number for December, 2015 is yet to be released and only two point increase in December, 2016 AICPI-IW Number the expected DA will be 126%.

The Dearness Allowance from Jan, 2016 is important in view of 7th CPC, which is due to implement with effect from 01.01.2016.  The recommendations of 7th CPC has taken the expected DA @ 125% for the purpose of minimum pay determination and the fitment factor for new pay structure.  The increase in Jan, 2016 DA will give the stress to Implementation Committee to change the Fitment Factor from 2.57 to 2.58.   The line of recommendations of 7th CPC regarding Fitment Factor are given below:-

5.1.27 The starting point for the first level of the matrix has been set at Rs.18,000. This corresponds to the starting pay of Rs. 7,000, which is the beginning of PB-1 viz., Rs.5,200 + GP 1800, which prevailed on 01.01.2006, the date of implementation of the VI CPC recommendations. Hence the starting point now proposed is 2.57 times of what was prevailing on 01.01.2006. This fitment factor of 2.57 is being proposed to be applied uniformly for all employees. It includes a factor of 2.25 on account of DA neutralisation, assuming that the rate of Dearness Allowance would be 125 percent at the time of implementation of the new pay. Accordingly, the actual raise/fitment being recommended is 14.29 percent.

How the DA from Jan, 2016 calculated to be 126% with 2 point increase in next month’s AICPIN is clear from undermentioned table:-

The All-India CPI-IW for November, 2015 increased by 1 point and pegged at 270 (two hundred and seventy). On 1-month percentage change, it increased by (+) 0.37 per cent between October and November, 2015 which was static between the same two months a year ago.
The maximum upward pressure to the change in current index came from Food group contributing (+) 0.64 percentage points to the total change. At item level, Wheat, Urd Dal, Mustard Oil, Eggs (Hen), Milk, Chillies-Dry, Garlic, Carrot, Lady’s Finger, Peas, Potato, Tomato, Tea (Readymade), Sugar, Flower/Flower Garlands, Tailoring Charges, etc. are responsible for the increase in index. However, this increase was restricted by Chillies Green, Onion, Brinjal, Cauliflower, Green Coriander Leaves, Methi, Radish, etc., putting downward pressure on the index.
The year-on-year inflation measured by monthly CPI-IW stood at 6.72 per cent for November, 2015 as compared to 6.32 per cent for the previous month and 4.12 per cent during the corresponding month of the previous year. Similarly, the Food inflation stood at 7.86 per cent against 7.50 per cent of the previous month and 2.56 per cent during the corresponding month of the previous year.
At centre level, Madurai reported the highest increase of 11 points followed by Tiruchirapally (9 points), Jalandhar, Puducherry and Salem (7points each) and Mundakkayam (6 points). Among others, 4 points rise was observed in 5 centres, 3 points in 7 centres, 2 points in 12 centres and 1 point in 10 centres. On the contrary, Jamshedpur, Tripura and Rangapara-Tezpur recorded a maximum decrease of 4 points each followed by Kolkata, Amritsar and Kodarma (3 points each). Among others, 2 points decrease was observed in 13 centres and 1 point in 8 centres. Rest of the 11 centres’ indices remained stationary.
The indices of 36 centres are above All India Index and other 41 centres’ indices are below national average. The index of Salem centre remained at par with all-India index.
The next issue of CPI-IW for the month of December, 2015 will be released on Friday, 29th January, 2016. The same will also be available on the office website www.labourbureaunew.gov.in.
(SHYAM SINGH NEGI)
DEPUTY DIRECTOR GENERAL 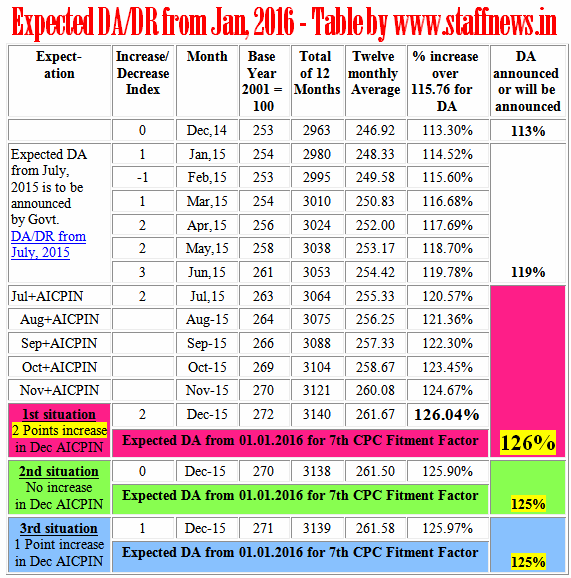