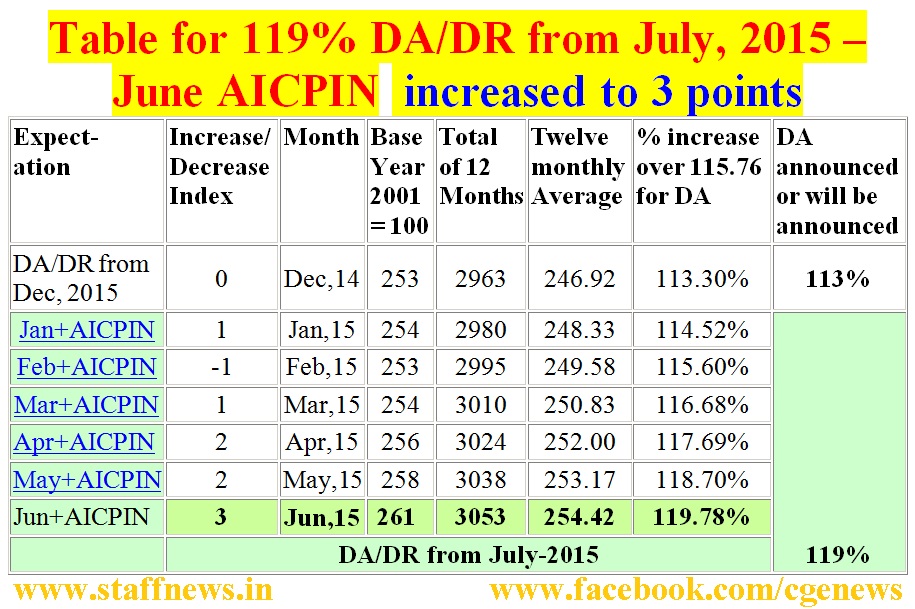 You may also download/save the excel sheet for self calculation.  The link for excel sheet is given below:
DOWNLOAD: EXCEL FILE FOR EXPECTED DEARNESS CALCULATION TO CALCULATE YOURSELF [click on File-Menu & download]

The All-India CPI-IW for June, 2015 increased by 3 points and pegged at 261 (two hundred and sixty one). On I-month percentage change, it increased by (+) 1.16 per cent between May, 2015 and June, 2015 when compared with the increase of(+) 0.82 per cent between the same two months a year ago.
The maximum upward pressure to the change in current index came from Food group contributing (+) 2.35 percentage points to the total change. At item level, Arhar Dal, Gram Dal, Masur Dal, Urd Dal, Groundnut Oil, Mustard Oil, Fish Fresh, Eggs (Hen), Poultry (Chicken), Milk (Buffalo & Cow), Onion, Chillies Green, Ginger, Vegetable items, Petrol, etc. are responsible for the increase in index. However, this increase was restricted by Rice, Mango, Lemon, Sugar, Electricity Charges, etc., putting downward pressure on the index.
The year-on-year inflation measured by monthly CPI-IW stood at 6.10 per cent for June, 2015 as compared to 5.74 per cent for the previous month and 6.49 per cent during the corresponding month of the previous year. Similarly, the Food inflation stood at 6.67 per cent against 5.99 per cent of the previous month and 5.88 per cent during the corresponding month of the previous year.
At centre level, Quilon reported the highest increase of 15 points followed by Godavarikhani (9 points) and Raniganj (7 points). Among others, 6 points increase was observed in 4 centres,S points in 9 centres, 4 points in 11 centres, 3 points in 8 centres, 2 points in 15 centres and 1 point in 11 centres. On the contrary, Ghaziabad centres recorded a maximum decrease of 2 points. Among others, I point decrease was observed in 6 centres. Rest of the 10 centres’ indices remained stationary.
The indices of 35 centres are above All India Index and other 42 centres’ indices are below national average. The index of Lucknow is at par with all-India index.
The next index of CPI-IW for the month of July, 2015 will be released on Monday, 31st August, 2015. The same will also be available on the office website www.labourbureau.gov.in.
(S.S. NEGI)
DEPUTY DIRECTOR GENERAL


Stay connected with us via Facebook, Google+ or Email Subscription.