CPAO is in the final stage of developing a single window online service for Central Civil Pensioners providing them access to pension process status and all the reqd. information about their pension & revision details,also providing for grievance registration facility & its status to Pensioners.This service also intends to track each pension case from the initial stage of preparation of list of all government servants who are due to retire within next 12 to 15 months on quarterly basis and its submission to concerned pay & accounts officer to the stage of first credit of pension by the bank.
CPAO is also in the process of collecting necessary Data for reconstructing the service records of those whose service books are not traceable for one or the other reason.
Earlier CPAO has digitalized all PPOs of central civil pensioners & have made these available online for down loading by the PDAs & the Pensioners.
Similar facilities exist for defence services pensioners also.
“Bharat Pensioners Samaj‘(BPS) the largest Federation of Pensioners. a conglomerate of over 628 pensioner’s organizations with a membership of over 6.50 lac wonders as to how the Ministry of Railways who has been a pioneer in stall benefits & welfare has lagged behind in providing such services to its 13.75 lac Sr citizen pensioners through digitalization.
BPS therefore. appeal to you to put digitalization of Railway Pensions also on last track.This will not only end exploitation & harassment of Rly pensioners’s family pensioners but will also check corruption.

Thanking you in anticipation. 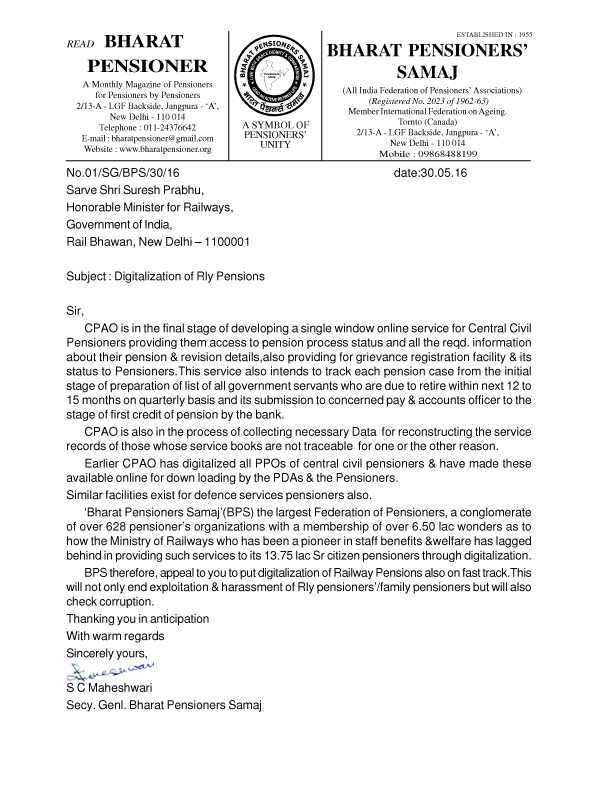