The undersigned is directed to say that consequent upon the decision taken by the Government on the recommendations of the Seventh Central Pay Commission relating to Dearness Allowance, the President is pleased to decide that the Dearness Allowance (DA) to all categories of Central Government employees shall be admissible at the rate of 2 percent of basic pay per month, w,e.f. 01.07.2016.
2. The revised pay structure effective from 01.01.2016 includes the Dearness Allowance of 125% sanctioned from 01.01.2016 in the pre-revised pay structure. Thus, Dearness Allowance in the revised pay structure shall be zero from 01.01.2016.
3. The term ‘basic pay’ in the revised pay structure means the pay drawn in the prescribed Level in the Pay Matrix but does not include any other type of pay like special pay, etc.
4. The Government vide Resolution No. 1-2/2016-IC. dated 25/07/2016 has decided that till a final decision on Allowances is taken based on the recommendations of the Committee constituted under the Chairmanship of Finance Secretary & Secretary (Expenditure), all Allowances will continue to be paid at existing rates.
5, The Dearness Allowance will continue to be a distinct element of remuneration and will not be treated as pay within the ambit of FR 9(21).
6. The payment on account of Dearness Allowance involving fractions of 50 paise and above may be rounded to the next higher rupee and the fractions of less than 50 paise may be ignored.
7. These orders shall also apply to the civilian employees paid from the Defence Services Estimates and the expenditure will be chargeable to the relevant head of the Defence Services Estimates. In respect of Armed Forces personnel and Railway employees, separate orders will be issued by the Ministry of Defence and Ministry of Railways, respectively.
8. In so far as the employees working in the Indian Audit and Accounts Department are concerned, these orders are issued in consultation with the Comptroller and Auditor General of India.
(Annie George Mathew)
Joint Secretary to the Government of India 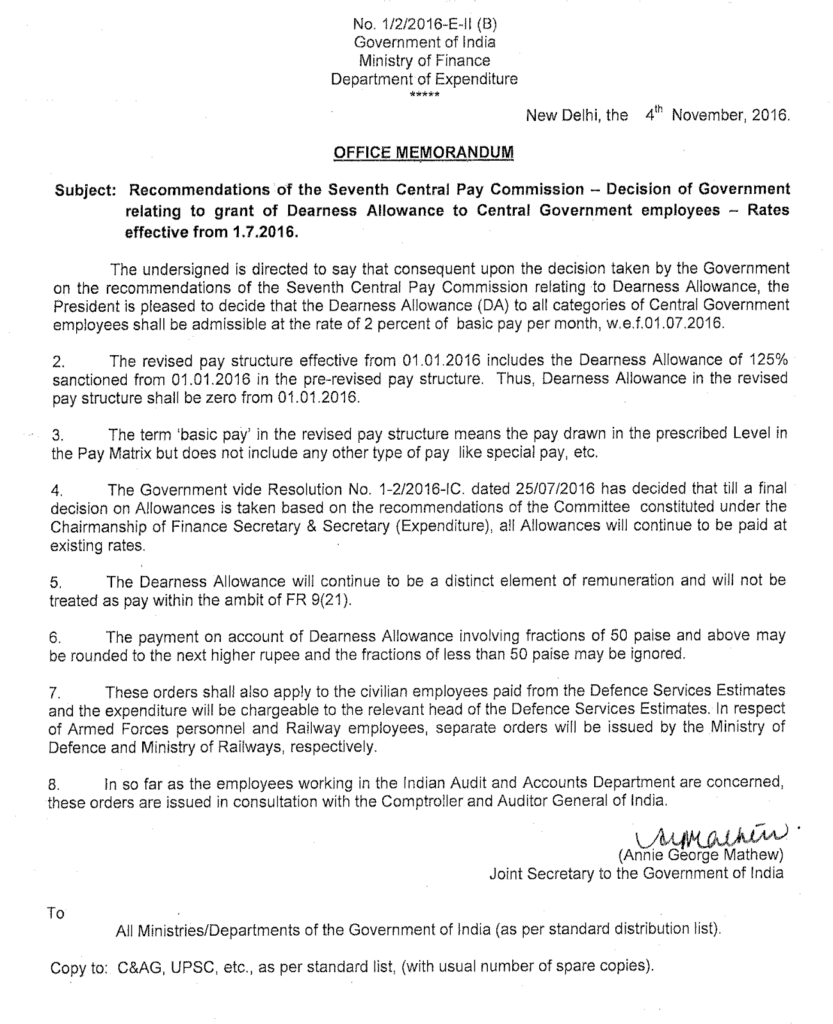