Cash Payment of wages for the month of December, 2016: NFIR writes to Railway Board 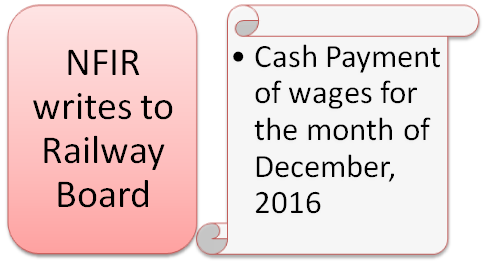 Ref: (i) NFIR’s letter o. I/3/Part I dated 16/11/2016 addressed to Railway Board (MS).
(ii) Railway Board’s letter No. 2016/E(LL)APW/1 dated 17/11/2016.
(iii) Railway Board’s Circular No. 2016/Cash-III Pay Advance/Misc dated 18th November, 2016.
(iv) NFIR’s letter No. I/3/Part I dated 18/11/2016 addressed to MS.
(v) Railway Board’s reply to GS/NFIR vide letter No. 2008/AC-II/21/9 (pt) dated 30/11/2016.
**********
Federation is in receipt of reply dated 30th November, 2016 from the Railway Board. In this connection, the hardships being faced by the Railway employees are reiterated once again as below.
The Railway employees are facing lot of hardships due to restrictions on drawal of their legitimate wages from their Bank Account. For November 2016 salary, only Rs. 10,000/- cash were paid to each Railway staff. However, due to continued restrictions, the Railway employees are not able to draw their wages adequately from the Banks for meeting their requirements.
It is therefore requested that Cash Payment of Rupees not less than 25,000 may be ensured to each Railway employee from out of December, 2016 salary.
Yours faithfully
(Dr. M. Raghavaiah)
General Secretary
Source – [NFIR Letter ##download##]
Follow us on Telegram Channel, Twitter and Facebook for all the latest updates