Inclusion of Aadhaar number in Service Book : Railway Board Order RBE No. 145/2016 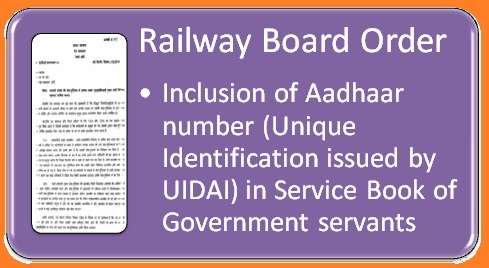 GOVERNMENT OF INDIA
MINISTRY OF RAILWAYS
RAILWAY BOARD

As Railway administrations are aware, in terms of extant rules/instructions every event in a Government servants’ official life must be recorded in his Service Book and each entry is to be attested by the Head of office.
2. An extract of Paras 1234 and 1235 of the ‘Indian Railway Administration and Finance Code’ which provides that the Heads of offices are to obtain signatures of the Railway servants in token of them having inspected their Service Books annually is reproduced below:-
[next]
“1234. Scrutiny by Employees: It shall be the duty of every Head of Office to initiate action to show the Service Books to railway servants governed by pension rules under his administrative control every year and to obtain their signature therein in token of their having inspected the Service Books. A certificate to the effect that he has done so in respect of the preceding financial year should be submitted by him to his next superior officer by the end of every September. The railway servants shall inter-aha ensure before affixing their signature that their services have been duly verified and certified as such. In the case of a railway servant on foreign service, his signature shall be obtained in his Service Book after the Accounts Officer has made therein necessary entries connected with his foreign service.
1235.. The scrutiny of his Service Book by the railway servant concerned, must be made in the presence ‘of a responsible official. As a token of his scrutiny and acceptance of entries in the Service Book, the railway servant should sign in the relevant column of the Service Book and the official who supervised the scrutiny will also endorse his signature as evidence that scrutiny was conducted under proper supervision and the supervising officer is satisfied that it was bona fide and no unauthorized changes were made in the entries in the Service Book in the course of such scrutiny.”
3. Furthermore, Rule 47 of the Railway Services (Pension) Rules 1993 provides for issuing a communication on completion of 18 years of service and five years before retirement, as part of preparatory work for sanctioning pensionary benefits.
4. Besides aforesaid directives, pursuant to Government of India’s instructions, it has also been decided that Aadhaar numbers of all Railway Servants should be included in their Service Book.
5. Therefore, all Zonal Railways/Production Units etc. are directed to ensure that the Service Book of all the employees have an entry of the employee’s Aadhaar number. Immediate necessary action in this regard may please be taken and the number of employees whose Service Books have been seeded with their respective Aadhaar number may be intimated to Board’s office within a month’s time.
6. In this connection, attention of Zonal Railways is invited to Board’s letter No. 2015/ED/ERP/UIDAI/01 dated 21/7/2016 wherein Railways/Production Units were directed to arrange for Aadhaar numbers and field units are expected to have taken action already.
7. This issues with the concurrence of the Finance Dte.
8. Please acknowledge receipt.
9. Hindi version will follow.
sd/-
(D. Joseph)
Dy. Director Estt. (Genl.) 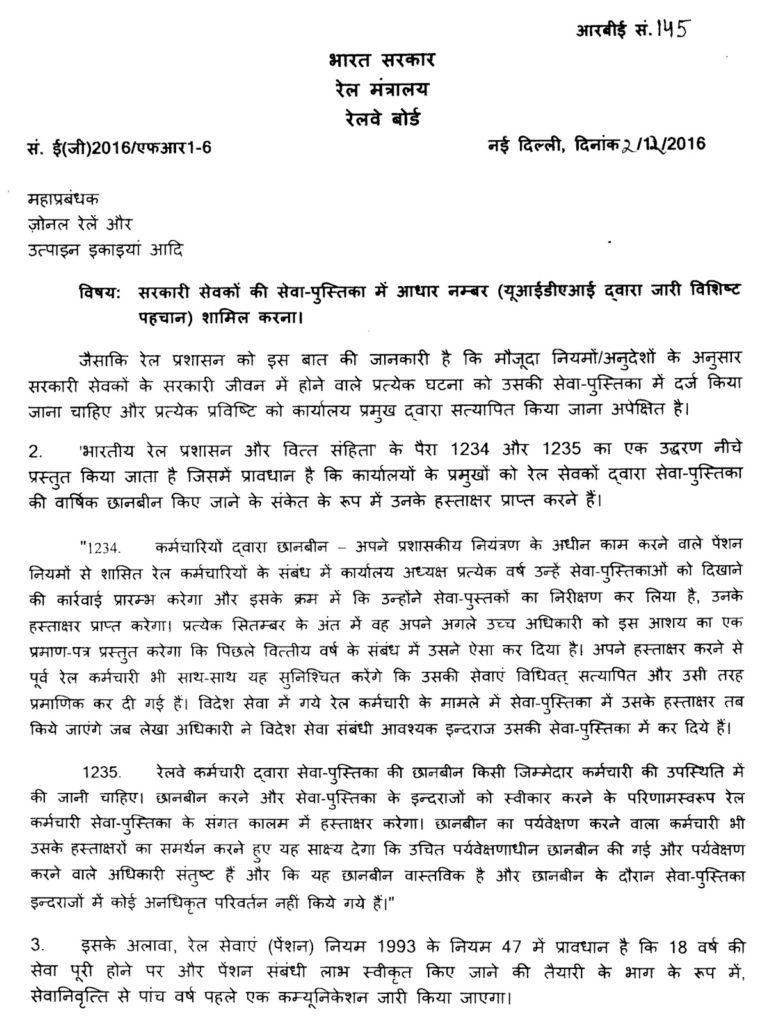 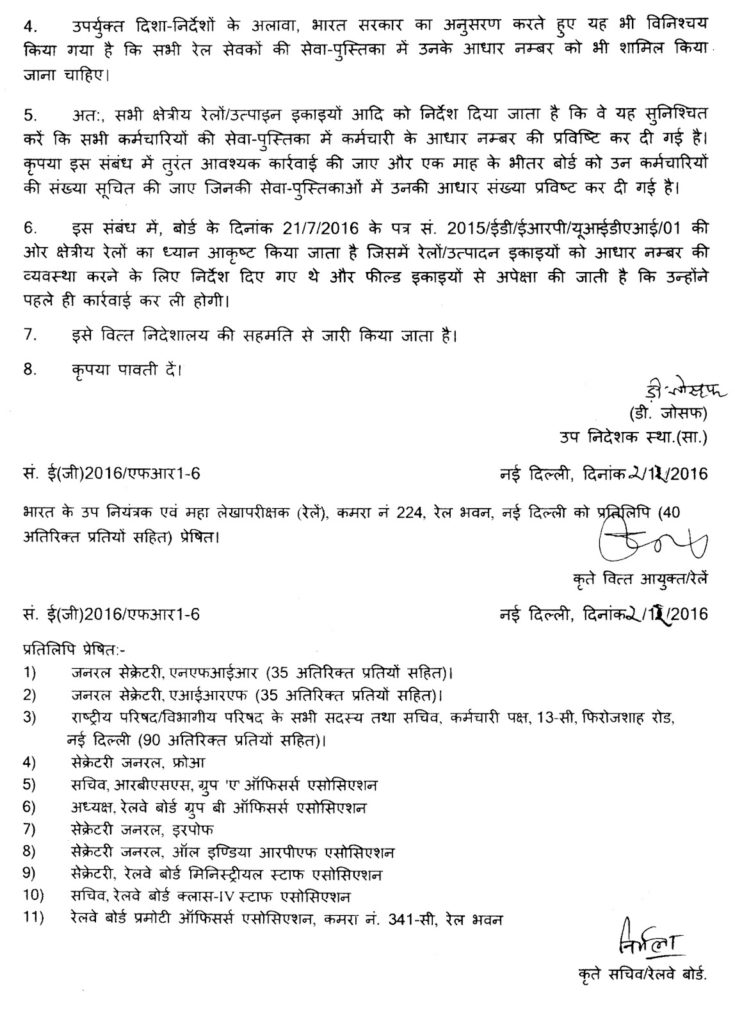