Kiran Kumari 0 December 13, 2016 8:10 am
Admissibility of Dearness Relief to pensioners on absorption in PSUs/ employed family pensioners
Government of India
Ministry of Railways
(Railway Board)
RBA No.94/2016

Kindly, refer to Board’s letter no. 2012/AC-II/21/Misc Matters dated 11.04.2016 followed by reminder dated 07.11.2016 reiterating instructions issued vide Board’s letter No. F(E)III/99/PN1/21 dated 05.08.1999 and letter no. F(E)III/2005/PN1/2. dated 29.09.2009 on the above subject. It was stated that instances have been brought to notice of Vigilance Directorate by one of the PSU wherein Dearness Relief on pension is being paid to certain re- employed pensioner not eligible to the draw the same as no endorsement towards non- admissibility of DR was made on their PPOs. Accordingly, it was requested to conduct a thorough check to detect such cases where DR relief on re-employment in Railway PSU sand other orgaliization has been paid/ drawn in violation of the laid down guidelines and send the compliance report to Board’s office. However, reply in this regard is not forthcoming from any of the Railways .
It is once again requested to conduct a thorough check to detect such cases followed by necessary recovery from the defaulting retired Railway Pensioner, besides taking further necessary action as per rules.
sd/-
(B.B. Verma)
Adviser Accounts
Railway Board 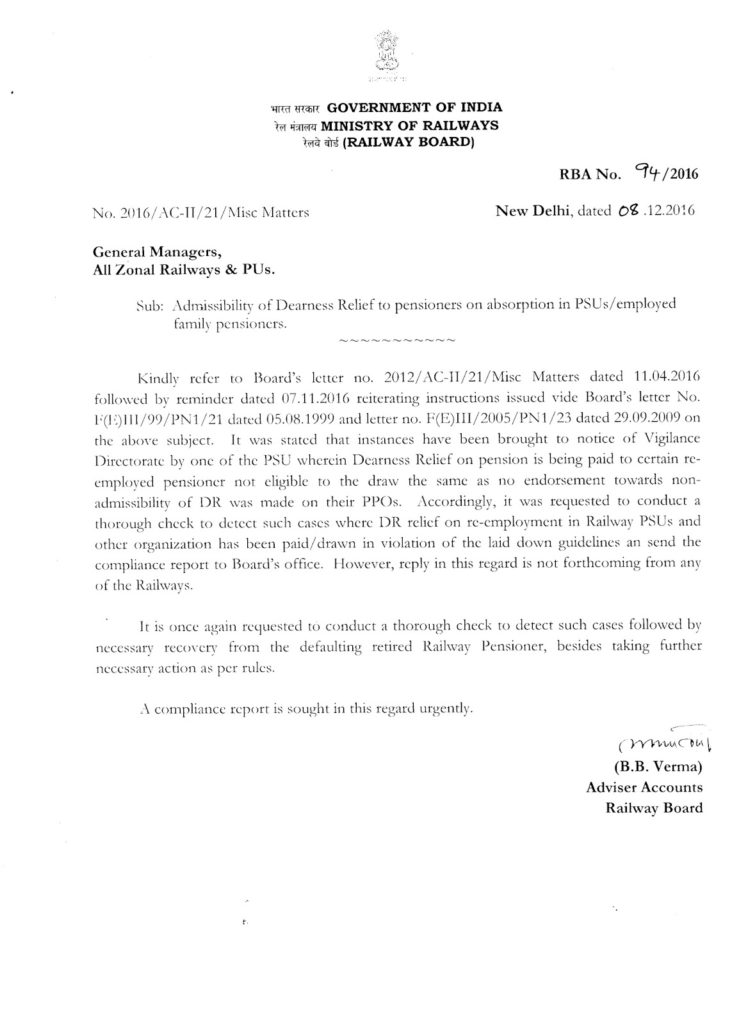