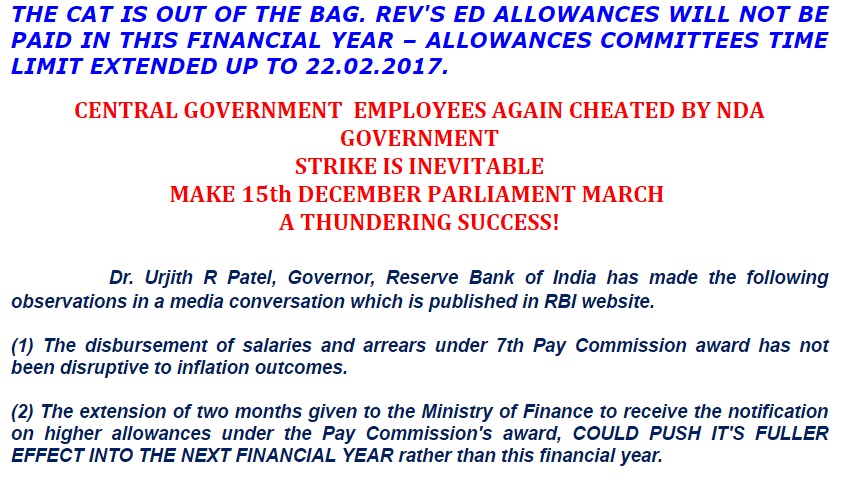 THE CAT IS OUT OF THE BAG. REVISED ALLOWANCES WILL NOT BE PAID IN THIS FINANCIAL YEAR – ALLOWANCES COMMITTEES TIME LIMIT EXTENDED UP TO 22.02.2017.

CENTRAL GOVERNMENT  EMPLOYEES AGAIN CHEATED BY NDA GOVERNMENT
STRIKE IS INEVITABLE
MAKE 15th DECEMBER PARLIAMENT MARCH
A THUNDERING SUCCESS!
Dr. Urjith R Patel , Governor , Reserve Bank of India has made the following observations in a media conversation which is published in RBI website.
(1) The disbursement of salaries and arrears under 7th Pay Commission award has not been disruptive to inflation outcomes.
(2) The extension of two months given to the Ministry of Finance to receive the notification on higher allowances under the Pay Commission’s award , COULD PUSH IT’S FULLER EFFECT INTO THE NEXT FINANCIAL YEAR rather than this financial year .
The above statement by the Governor , RBI clearly indicates that THE ALLOWANCES WILL BE REVISED ONLY AFTER FEBRUARY 2017 AND WILL COME INTO EFFECT IN THE NEXT FINANCIAL YEAR ONLY.
Earlier to a question regarding increase in Minimum Pay and Fitment formula Minister of State for Finance Shri Arjun Ram Meghwal gave the following reply in the Raja Sacha on 23.11.2016.
“The anomalies arising out of implementation of 7th Central Pay Commission will be examined by the Anomaly Committee which has already been constituted. Based on the report of the Committee , the matter will be considered by the Government and appropriate decision will be taken. “
From the reply it is clear that the question of increase in Minimum Pay and Fitment factor is to be decided by the Anomaly Committee. That is why the Government has not formally constituted THE HIGH LEVEL COMMITTEE as assured by the Group of Ministers to the JCM Staff side leaders in the  30th June night  discussion. And this is the reason for Group of Senior Officers behaving as if they .don’t know what is the task assigned to them. Now by 30th December SIX months will be over after the 30th June assurance given by Group of Ministers including Shri Rajnath Singh , Hon’ble Home Minister , Shri Arun Jaitley , Hon’ble Finance Minister and Shri Suresh Prabhu , Hon’ble Railway Minister . Employees and Leaders have never expected such blatant breach of assurance given by Senior Cabinet Ministers of NDA Government .
The revision of pay and pension of thousands of  Autonomous body employees and Pensioners  is also pending for the last six months. On 17.11.2016 Finance Ministry has given instructions to all Autonomous bodies NOT TO EXTEND the benefits of 7th CPC to employees and Pensioners of Autonomous bodies UNTIL FURTHER ORDERS.
The One man Committee constitute by Government for revision of wages and service conditions of three lakhs Gramin Dak Sevaks of Postal Department had submitted it’s report to Government on 24th November 2016.  Even after 20 days , the Government is not ready to publish the report or give copy to the recognised Federations.
The revision of wages of Casual , Part-time Contingent and Contract workers , consequent on implementation of 7th CPC wage revision is also pending.
The one and the only favourable recommendation of 7th CPC ie; Parity between past and present pensioners (Option – 1) stands referred to a Committee which has taken a stand that Option – 1 is not feasible.

None of the demands raised by Confederation in its 20 point charter of demands is settled.

THERE IS NO SHORT-CUT OTHER THAN STRUGGLE.

WE THE WORKERS , WE THE NATION , WE ARE NOT BEGGAR FOLKS
Source: Confederation