RBI is not against the HRA hike as per 7th CPC HRA; Analysis

Kiran Kumari 1 April 11, 2017 4:07 am
RBI is not against the HRA hike as per 7th CPC HRA; Analysis by Paramnews.com
Committee on Allowances has concluded his exercise as the last meeting was held on 6th April, 2017 and the report of committee has been handed over to Cabinet Secretary soon.  Cabinet Secretary has already assured to JCM that he will put-up the report to the Cabinet for early approval. 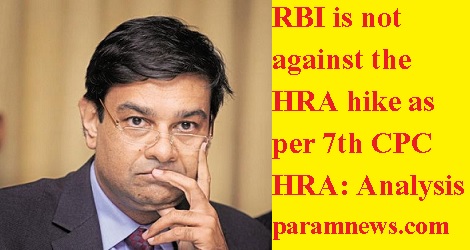 Some media/blog reports are advocating that RBI First Monetary Policy 2017-18 issued on 6th April, 2017 is against the HRA hike as recommended by 7th CPC, but at the same time the Paramnews.com team has analyzed the previous Monetary Policy Report alongwith recently issued and interpreted that the RBI First Monetary Policy 2017-18 issued on 6th April, 2017 is not against the HRA hike as per 7th CPC recommendations.  However the previous reports of Monetary Policy issued by RBI were against the HRA hike [Must see full article Delay in 7th CPC HRA in view of RBI First Bi-monthly Monetary Policy].
As the RBI Monetary Policy is stating that inflation risk in the enhancement HRA and the other hand the RBI also want to be neutral not hawkish on the issue of inflation risk. Now RBI is positively signalling about expenditure see the answer of last question asked by CNBC correspondent Reserve Bank of India’s First Bi-Monthly Post Policy Press Conference:
“Latha Venkatesh CNBC TV 18: To continue with what Ira asked you Governor, you are speaking about upside risks to inflation. So, should we assume that even this movement to neutral cannot remain for long that if you have to get to 4% you will have to even go beyond neutral and get too hawkish?
Dr. Urjit R. Patel: The Committee has also pointed out a couple of downside risks and we have also said that the economic content of the incoming data will determine our future course. We are of course aware of the risks on inflation and we have a medium-term target to achieve. So we will do that, but we feel that at this juncture the shift from accommodative to neutral is adequate. Thank you.” [Source RBI]

As per above statement by RBI is showing the Inflation Risk but be neutral on it. RBI also want to give boost in housing sector, which are marked low during demonetization. At the same time the Govt also want to trigger housing sector to show extreme interest in the “Prime Minister Awas Yojana (PMAY)” and “Housing For All (Urban) Mission”. Therefore Team Paramnews has interpreted that now RBI is not against the revision of HRA & allowances as per recommendation of 7th Central Pay Commission, so It’s time to be happy for Central government employee as RBI’s signals
However Paramnewsteam is also advocating that delay in 7th CPC HRA in view of RBI First Bi-monthly Monetary Policy issued in April, 2016 [Click here to read full article]
[Read more at Paramnews.com ##view##]
Follow us on Telegram Channel, Twitter and Facebook for all the latest updates