Kiran Kumari 1 May 8, 2017 3:10 am
Defence Pay Hike from May: The Hindu
Order says remaining core concerns are being addressed separately
After a wait of about eight months, military personnel are likely to receive their revised pay recommended by the Seventh Pay Commission with arrears in May’s salary, say the general instructions issued by the three Services to their personnel.
The Union Cabinet issued orders last week for implementing the recommendations for military personnel. Following this, the three Services issued the general instructions stating the various recommendations that were approved.
“Army pay rules 2017 issued on May 03 … Some core concerns have been addressed and remaining core concerns are being addressed separately,” said the instructions issued by the Army’s Pay Commission Cell on May 5.
Pay stages stretched
The recommendations approved include extension of pay stages for junior commissioned officers (JCO) and other ranks from 24 to 40 to prevent stagnation, increase in index of rationalisation for Colonels and Lieutenant-Colonels from 2.57 to 2.67 and extension of pay stages for Brigadiers by two.
On the pension front, two recommendations approved are restoration of the percentage-based disability pension and an additional option for pension by pay fixation method in addition to the consolidation method, whichever is higher.
“Revised pay with arrears likely to be credited this month,” the instruction stated. 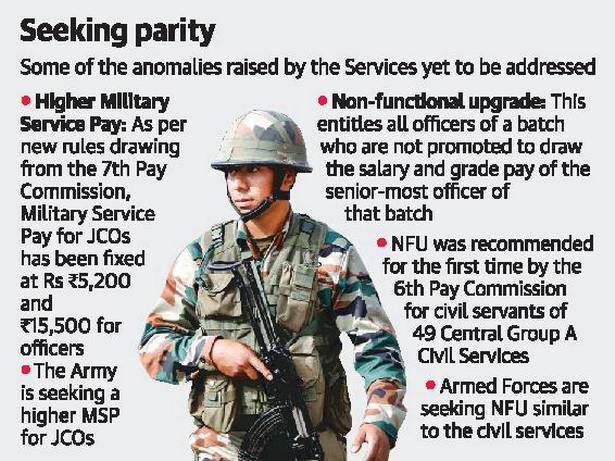 Arrears since Jan. ‘16
Sources said the arrears will be calculated from January 2016, the date of implementation of the pay panel recommendations, and will be credited with this month’s salary along with the revised pay. “They will deduct the 10% interim arrears given before Deepavali last year,” a source added.
The Controller-General of Defence Accounts (CGDA), which is responsible for implementing the recommendations, has already been issued instructions. “They will now calculate the revised tables and release them,” the source said.
Anomalies remain
However, some of the core anomalies raised by the services are yet to be addressed, top among them are Non-Functional Upgrade (NFU) and higher Military Service Pay (MSP) for JCOs.
NFU entitles all officers of a batch who are not promoted to draw the salary and grade pay that the senior-most officer of their batch would get after a certain period.
In a reference to that the instructions notes: “Pay comparison between defence services, all India services and Group A services must be understood in totality and explained to rank and file to dispel apprehensions about discrepancies.
Read at The Hindu
Follow us on Telegram Channel, Twitter and Facebook for all the latest updates