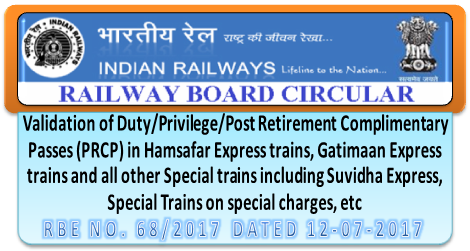 RBE No. 68/2017
Government of India
Ministry of Railways
(Railway Board)

On a demand raised in PREM Group Meeting, a proposal for standardization of travel entitlement on Passes has been under consideration.

2. After due deliberations, Board have decided to allow booking of berths/seats by serving/retired Railway Servants on Duty/Privilege/Post Retirement Complimentary Passes, as follows:-
(i) The accommodation in Hamsafar Express trains for Duty/Privilege/PRCP shall be earmarked as at par with that being earmarked in Rajdhani/Duronto Express trains.
(ii) In Gatimaan Express train, the accommodation for Duty/Privilege/PRCP shall be earmarked as at par with that being earmarked in Shatabdi Express trains.
(iii) In all other special trains including Suvidha Express, Special Trains on special charges, etc., the accommodation shall be earmarked on the lines of Rajdhani/Duronto/Shatabdi Express trains depending upon the type of coaches being attached in that train to the extent of 1AC-4, EC4, 2A-6, 3A-16, CC-4, SL-20 and 2S-20.
2. Booking of tickets in above categories of trains will be allowed on the basis of extant stamping on passes for travel by Rajdhani/Shatabdi/Duronto Express trains with a minor modification that now the word “Rajdhani/Shatabdi/Duronto Express type trains” shall be stamped. No additional stamping containing the name of any other train is to be made on the passes. The Pass Issuing Authorities should ensure that stamping on the passes is strictly in compliance with the Pass Rules and duly authenticated.

3. This information may be brought to the notice of all concerned.

4. CRIS will make necessary modifications in the software immediately under intimation to Board and all Zonal Railways.
5. This issues with the concurrence of the Finance and Commercial Directorates of the Ministry of Railways.
6. Receipt of the letter may be acknowledged.
sd/-
(Vikram Singh)
Director (Passenger Marketing)
Railway Board
sd/-
(Sunil Kumar)
Director Establishment (Welfare)
Railway Board
Source Link:
http://www.indianrailways.gov.in/railwayboard/uploads/directorate/establishment/E(W)/2017/68%20of%202017.pdf
Follow us on Telegram Channel, Twitter and Facebook for all the latest updates