Sub: First Meeting of Departmental Anomaly Committee to Settle the anomalies arising out of the implementation of 7th CPC.

Ref:- Draft Minutes circulated vide letter dated 21.07.2017.
The Minutes of the First meeting of Departmental Anomaly Committee held on 20.06.2017, finalised in consultation with the Fedaration are enclosed.
Yours Sincerely,
For Secretary Railway Board

Minutes of the First Meeting of Departmental Anomaly Committee held on 20.06.2017.


The first meeting of Departmental Anomaly Committee (DAC) was held on 20.06.2017 at 11 A.M. in Room No.402. The following attended the meeting.
Official Side
i) Shri Manoj Pande, AM (Staff)
ii) Shri Tanveer Ahmed, EDF(E)
iii) Shri Dhruv Singh ,EDPC-I
v) Shri Alok Kumar, ED E(IR)
v) Shri S.Balachandra Iyer, EDPC-II
The Federation:
2. Shri Manoj Pande, AM (Staff), Chairman/DAC welcomed all the representatives to the meeting and stated that the meeting is to address the anomalies arising out of the implementation of 7th CPC as defined in DoP&T’s OM dated 16th August,2016 and circulated vide Ministry of Railways letter no.PC-VII/2016/DAC/1 dated 29.03.2017 and PC-VII/2016/DAC/1 dated 25.05.2017, As advised through these Letters, anomaly will include the following cases:-
(a) Where the official Side and Staff Side are of the opinion that any recommendation is in contravention of the principle or the policy enunciated by the Seventh Central Pay Commission itself without the Commission assigning any reason;
(b) where the maximum of the Level in the Pay Matrix corresponding to the applicable Grade Pay in the Pay Band under pre-revised structure, as notified vide CCS(RP) Rules,2016, is less than the amount an employee is entitled to be fixed at, as per the formula for fixation of pay contained in the Said Rules;
(c) where the Official Side and the Staff Side are of the opinion that the vertical and horizontal relativity have been disturbed as a result of the 7th Central Pay Commission to give rise to anomalous situation.
3. It was also stated by AM (Staff) that both the Federations were requested to submit the agenda items which have been observed as anomalies within the provision of anomalies as defined in the aforesaid letters. As agenda was given only by NFIR, on the NFIR agenda items remarks were circulated to the participants of the meeting.
4. Dr.M. Raghavaiah, General Secretary , NFIR Stated in his introduction speech that the definition of anomaly should be interpreted liberally.The official side and the staff definition of ‘anomaly’ to ensure that Railway employees are given justice. He said that careful examination and ground realities would reveal that anomalies arised in Railways specific categories are needed to be addressed judiciously. He also brought out following issues/Suggestions.
5. W.r.t the points raised by Dr. Raghavaiah, the Official Side clarification that all the factual position and historical background were brought before 7th CPC w.r.t the anomailes existing inrespct of the pay strucutre of Technical supervisors.
6. Shri Shiv Gopal Mishra, General Secretary/AIRF took up the issue regarding up gradation of pay structure in respect of Accounts and CMA cadre as per the recommendations of 7th Pay Commission and stated that there has been no action on implementing these recommendations.
7. As regards, AIRF’s issue regarding of pay structure of various categories of Indian Railways, it was stated by Official Side that while approving the recommendations of 7th CPC, Ministry of Finance in its resolution dated 25.07.2016 decided to refer the recommendations of 7th CPC to upgraded the pay structure of thirteen categories in various Ministries including Accounts and CMA cadres of Indian Railways to DoP&T for taking a comprehensive view. In pursuance of the communications made by Ministry of Railways with 7th CPC and Implementation Cell in this regard. DoP&T after due consideration, in the first week of April 2017 returned these proposals stating that in terms of Transaction of Business Rule (TBR) the up gradation of pay structure is an refer the issue to Department of Expenditure. While acknowledging the 7th CPC recommendation and the Federation’s demand in this case, the Official Side also pointed out that historical relativity across cadres have to be kept in mind.
8. the 28 point agenda given by NFIR was briefly taken up for discussion. The comments of the Nodal Directorate on these issues were shared to all the delegates in the meeting. It is observed that certain issues such as Item no.20 (Perfusionist in Railways) Item no. 18 (Dietician in Railways) already stand resolved. However, point wise detailed discussion of the agenda was not taken up for study to enable the Federation to respond to these comments.
9. Before concluding, it was stated by the Official Side that various anomalous issues and damands such as non-replacement of -1S Scale, ambiguity in 14.29% increase in pay fixation in the case of Running Staff category, Upgradation of pay structure of Railway Dressers, clarifications on FR (22) options and “bunching” increments, improvement in Technical Supervisors’ and group ‘B’ officers pay scale have already been taken up with Ministry of Finance for redressal.
The meeting ended with a note of thanks to the Chair.
sd/-
(Jaya Kumar G)
Deputy Director, Pay Commission-VII
Railway Board 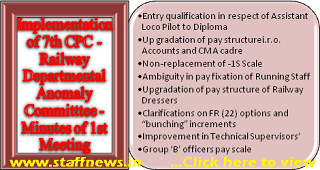