7th CPC Travelling Allowance Rules for Railway Employees: Entitlements for Journeys on Tour or Training, Transfer and on retirement

Consequent upon the decisions taken by the Government on the recommendations of the Seventh Central Pay Commission relating to Travelling Allowance entitlements, sanction of the President is conveyed to the revision in the Railway Travelling Allowance Rules as set out in, the Annexure to this letter.
2. The ‘Pay Level’ for determining the TA/DA entitlement is as indicated in the Railway Services (Revised Pay) Rules, 2016.
3. The term ‘Pay’ in the level for the purpose of these orders refer to Basic Pay drawn in appropriate Pay Level in the Pay Matrix as defined in Rule 3(8) of Railway Services (Revised Pay)  Rules, 2016 and does not include Non-Practicing allowance (NPA), or any other type of pay- like special pay etc.
4. However, if the Travelling Allowance entitlements in terms of the revised entitlements now prescribed result. in a lowering of the existing entitlements in the case of any individual, groups or classes of employees, the entitlements, particularly in respect of mode of travel, class of accommodation, etc., shall not be lowered. They will instead continue to be governed by the earlier orders on the subject till such time as they become eligible, in the normal course, for the higher entitlements.
5. The claims submitted in respect of journey made on or after 1st July, 2017, may be regulated in accordance with these orders. In respect of journeys performed prior to 1st July, 2017, the claims may be regulated in accordance with the previous orders dated 01.12.2008.
6. It may be noted that no additional funds will be provided on account of revision in TA/DA entitlements. It may therefore be ensured that permission to official travel is given judiciously and restricted only to absolutely essential official requirements.
7. These orders shall take effect from 1st July, 2017.
8. Hindi version is enclosed.
9. Please acknowledge receipt.
(Sonali Chaturvedi)
Dy. Director Finance (Estt.)
Railway Board
[Authority: Ministry of Finance OM No. 19030/1/2017-E.IV dated 13.07.2017 ##eye##]
ANNEXURE
Annexure to Board’s letter No. F(E)I/2017/AL-28/41 dated 24.08.2017.
In partial modification of Railway Travelling .Allowance Rules contained in Chapter 16-IREC-Vol.II -2005 Edition) and Board’s letters No. F(E)I/2008/AL-28/14 and F(E)I/2008/AL-28/15, dated 01,12.2008, the following provisions will be applicable with effect from 01.07.2017.
2 Entitlements for Journeys on Tour or Training
A. Journeys by Air within the Country.
(i) Officers in Level-16 and above, while on tour, may be entitled for air travel in ‘J’/ Business Class.
(ii) All other Officers, otherwise authorized to travel by Air may be entitled to travel by economy class.
All mileage points earned by Railway employees on tickets purchased for official travel shall be utilized by the Railway for other official travel by their officers. Any usage of these mileage points for purposes of private travel by an officer will attract departmental action. This is to ensure that the benefits out of official travel, which is funded by the Railway, should accrue to the Railway. It is the responsibility of the officer concerned to ensure that free mileage points are used only for official travel and not for personal trips. Any other incentives and similar packages such as free companion etc. should be so negotiated that the benefits come to the Railway.
B. Journey by Air (International)

(i) For places other than A&N Group of islands and Lakshadweep Group of
Island:


(ii) For travel between the mainland and the A&N Group of Islands and
Lakshadweep Group of island by ships operated by the shipping Corporation
of India Limited:

(i) At places where specific rates have been prescribed:

(ii) At places where no specific rates have been prescribed either by the
Directorate of Transport of the concerned State or of the neighbouring states
(these rates will further rise by 25 % whenever DA increases by 50%):

Free passes, as admissible under Rules, may be issued to a Railway servant.

(i) Journeys by Air: Officers in Level-15 and above, while on transfer, may be
entitled for air travel in `37 Business Class, at their discretion to join the
new
HQs. Officers in level 14 may also be permitted to travel by air with the
approval of Competent Authority, subject to exigency and where joining at
transfer station has to be effected with immediate effect. This is also subject
to fulfillment of conditions as per Board’s letter no. F(E)I/2003/AL-28/7 dated
16.9.2003. The air fare is, however, admissible for self only. No family
member of any Railway servant is entitled to travel by air on transfer.

(ii) Journeys by Rail: Free passes, as admissible under Rules, may be issued
to a Railway servant and his family members.

(i) The Composite Transfer Grant shall be paid at the rate of 80% of the last
month’s basic pay in case of transfer involving a change of station located at
a distance of or more than 20 kms. from each other. Further, NPA shall not be
included as part of basic pay while determining entitlements for CTG.

(ii) In cases of transfer to stations which are at a distance of less than 20
kms.
from the old station and of transfer within the same city, one third of the
composite transfer grant will be admissible, provided a change of residence is
actually involved.


These rates will further rise by 25% whenever DA increases by 50%. The
claim for reimbursement shall be admissible subject to the production of actual
receipts / vouchers by the railway servants.

Reimbursement of charges on transportation of conveyance as admissible under
Rules, may be provided,

A. Travel Entitlements: same as para 3(A) above

(ii) For Railway servants, who on retirement settle at the last station of duty
itself
or within the distance of less than 20 Kms. may be paid one third of the CTG
subject to the condition that a change of residence is actually involved.

C. Transportation of Personal Effects: Same as para 3(C) above.

D. Transportation of conveyance: Same as para 3(D) above.

Source: Click on image to view/download the Railway Board Order 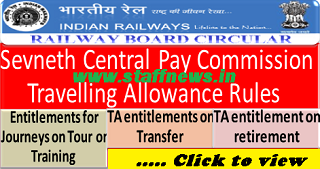