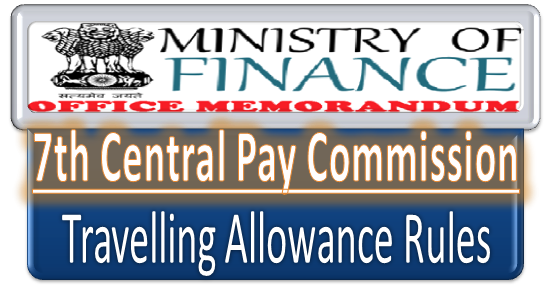 Consequent upon the decisions taken by the Government on the recommendations of the Seventh Central Pay Commission relating to Travelling Allowance entitlements to civilian employees of Central Government, President is pleased to decide the revision in the rates of Travelling Allowance as set out in the Annexure to this Office Memorandum.
2. The ‘Pay Level’ for determining the TA/DA entitlement is as indicated in Central Civil Service (Revised Pay) Rules 2016.
3. The term ‘Pay in the Level’ for the purpose of these orders refer to Basic Pay drawn in appropriate Pay level in the Pay Matrix as defined in Rule 3(8) of Central Civil Services (Revised Pay) Rules, 2016 and does not include Non-Practising Allowance (NPA), Military Service Pay (MSP) or any other type of pay like special pay, etc
4. However, if the Travelling Allowance entitlements in terms of the revised entitlements now prescribed result in a lowering of the existing entitlements in the case of any individual, groups or classes of employees, the entitlements, particularly in respect of mode of travel, class of accommodation, etc, shall not be lowered. They will instead continue to be governed by the earlier orders on the subject till such time as they become eligible, in the normal course, for the higher entitlements.
5. The claims submitted in respect of journey made on or after 1st July, 2017, may be regulated in accordance with these orders. In respect of journeys performed prior to Isl July, 2017, the claims may be regulated in accordance with the previous orders dated 23.09.2008.
6. It may be noted that no additional funds will be provided on account of revision in TA/DA entitlements. It may therefore be ensured that permission to official travel is given judiciously and restricted only to absolutely essential official requirements.
7. These orders shall take effect from 01st July, 2017
8. Separate orders will be issued by Ministry of Defence and Ministry of Railways in respect of Armed Forces personnel and Railway employees, respectively.
9. In so far as the persons serving in the Indian Audit & Accounts Department are concerned, these orders issue in consultation with the Comptroller & Auditor General of India

(Nirmala Dev)
Deputy Secretary to the Government of India

7th CPC TA Rules: Entitlement for Journeys on Tour or Training
ANNEXURE
Annexure to Ministry of Finance, Department of Expenditure
O.M.No.19030/112017-E.IV dated 10th July 2017.
In supersession of Department of Expenditure’s O.M. No. 19030/3/2008-E.IV dated 23.09.2008, in respect of Travelling Allowance the following provisions will be applicable with effect from 01.07.2017 :
2. Entitlements for Journeys on Tour or Training [Click to view]
3. T.A. on Transfer [Click to view]
4. T.A. Entitlement of Retiring Employees [Click to view] 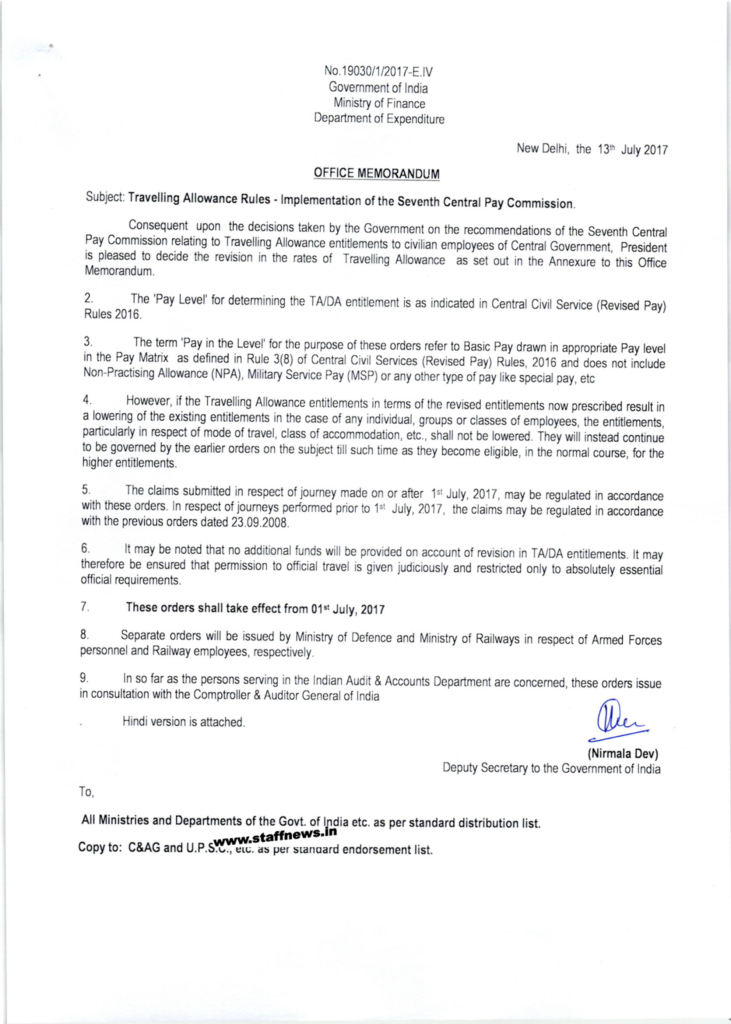 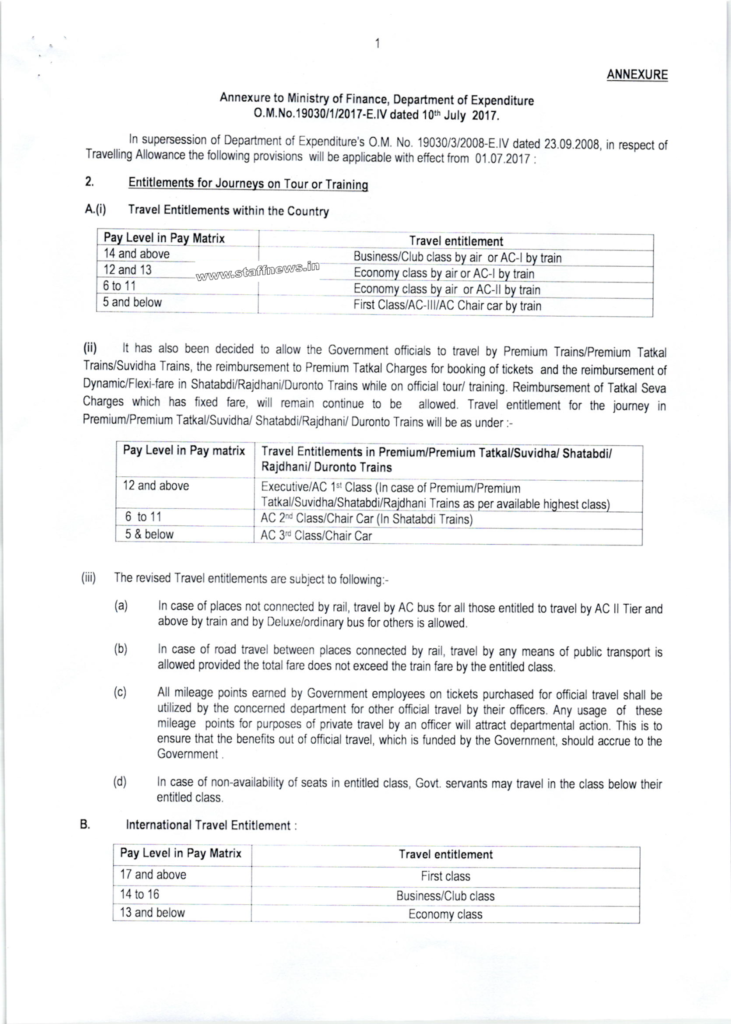 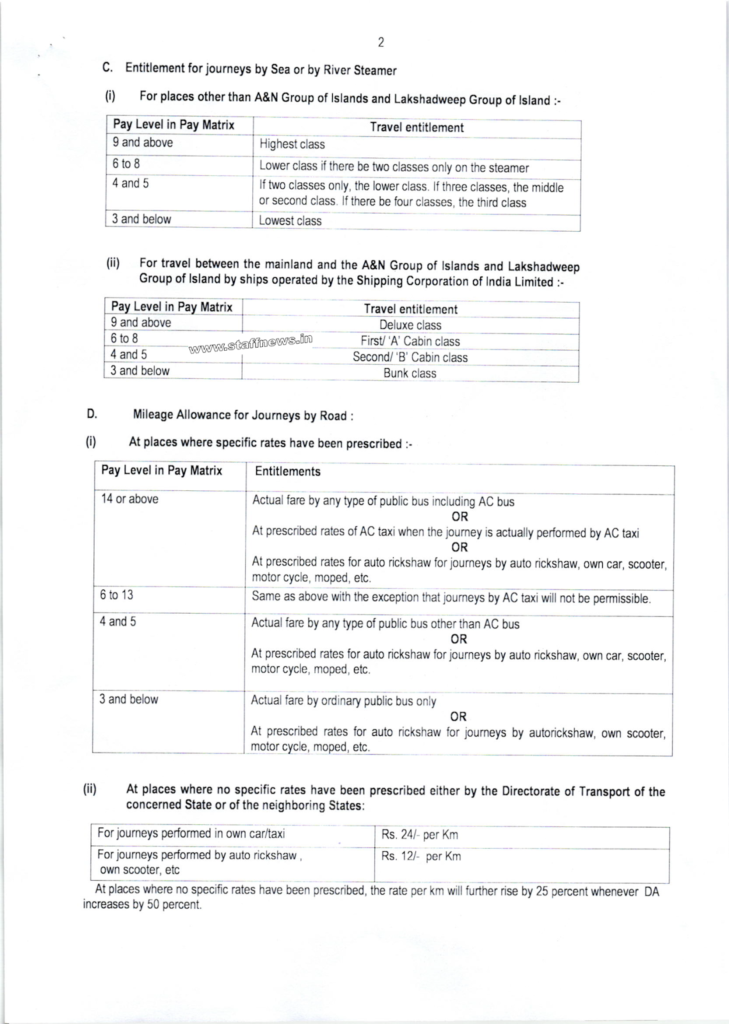 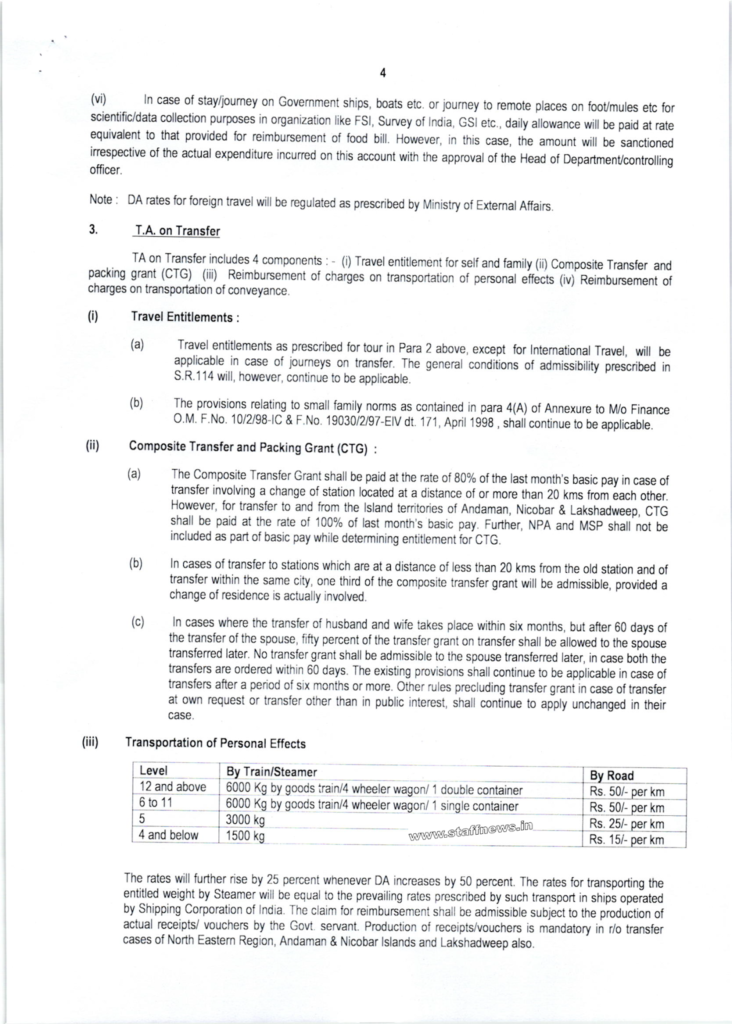 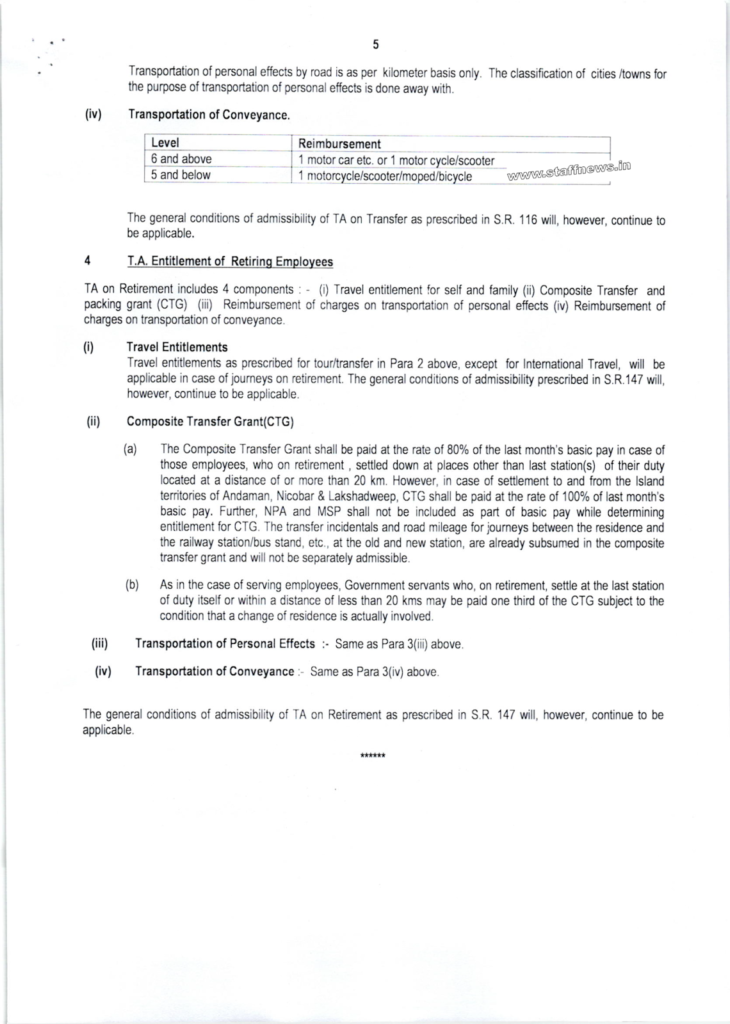