Subject: Appeal for restoration of Option 1 recommended by 7th Central Pay Commission for Revision of Pension of Pre-2016 Pensioners – For Parity of Pension between Pre & Post-2016 Central Government Pensioners

Reference: i) DOP&PW OM No.38/37/2016-P&PW(A) dated 12th May, 2017 & 6th July, 2017 ii) Para 10.1.67 of 7th CPC Report for grant of Parity of Pension of Pre & Post Seventh CPC Pensioners
1.We draw your kind attention to the sad plight of large majority of Central Government Pensioners – especially the Pre-2006 Pensioners and more so the Pre-1996 Pensioners, who will suffer a major financial loss in fixation of their Revised Pension on account of an unjust decision on implementation of 7th CPC Report vide DOP&PW OM dated 12-5-2017 cited above.
2.The Seventh Central Pay Commission (CPC) in Para 10.1.67 & 10.1.68 of its Report had for the first time conceded the long pending demand of the Central Government Pensioners for Parity of Pension between the Pre and Post CPC Pensioners and had recommended the following pension formulation for civil employees including CAPF personnel who had retired before 01.01.2016:
i) All the Civilian personnel including CAPF who retired prior to 01.01.2016 (expected date of implementation of the Seventh CPC recommendations) shall first be fixed in the Pay Matrix being recommended by this Commission, on the basis of the Pay Band and Grade Pay at which they retired, at the minimum of the corresponding level in the matrix. This amount shall be raised, to arrive at the notional pay of the retiree, by adding the number of increments he/she had earned in that level while in service, at the rate of three percent. Fifty percent of the total amount so arrived at shall be the revised pension.
ii) The second calculation to be carried out is as follows. The pension, as had been fixed at the time of implementation of the VI CPC recommendations, shall be multiplied by 2.57 to arrive at an alternate value for the revised pension.
iii) Pensioners be given option of choosing whichever formulation is beneficial to them.
3.Option 1, cited above, was very much feasible to implement as recommended by 7th CPC for revision of Pension of old Pension since according to the survey conducted by the DOP&PW, it was accepted that the Service Records of over 80% of old Pensioners were available, while those of the others could be re-built as per procedure prescribed in the Rules and as was done after 5th & 6th CPC and as per orders of the Courts in numerous cases.
4.Regrettably, the Committee formed by the Government, to consider the feasibility of implementation of Option 1 recommended by the Seventh CPC, while finding it non-feasible, did not care for the interest of the more than 80% of the Pensioners merely to save the Administration from the botheration of Re-building the Service Records of the rest less than 20% Pensioners. This was a great injustice since the 80% of the Pensioners who’s Records are available, shall suffer a loss of Pension just because of missing records of the rest 20%.
5.Instead, the Government accepted the following formula vide OM Dated 12-5-2017, as recommended by the Committee on Feasibility of Option 1:
“the revised pension/family pension w.e.f. 01.01.2016 in respect of all Central civil pensioners/family pensioners, including CAPF’s, who retired/died prior to 01.01.2016, may be revised by notionally fixing their pay in the pay matrix recommended by the 7th CPC in the level corresponding to the pay in the pay scale/pay band and grade pay at which they retired/died. This will be done by notional pay fixation under each intervening Pay Commission based on the Formula for revision of pay. While fixing pay on notional basis the pay fixation formulae approved by the Government and other relevant instructions on the subject in force at the relevant time shall be strictly followed. 50% of the notional pay as on 01.01.2016 shall be the revised pension and 30% of this notional pay shall be the revised family pension w.e.f. 1.1.2016 as per the first Permutation.”
6) The above said formula will very seriously and adversely affect the Revised pension of a large majority of the Pre-2016 Pensioners on account of following reasons:
a) “Parity of Pension” between Pre and Post-2016 Pensioners – recommended by the Seventh CPC – would be denied to the Pre-2016 Pensioners.
b) In the process of notional pay fixation in successive Pay Commissions, there is a lot of dilution particularly for pensioners who retired in 4th CPC period resulting in big financial loss.
c) Irrespective of the date of retirement, Option 1 would have given the same pension to pre-2016 pensioners depending upon the number of increments earned in the last Level. By denying option 1 there will be sub-groups even within the homogenous group of pre-2016 pensioners.
d) None of the above losses would occur to the Pre-2016 Pensioners if the Option 1 recommended by the 7th CPC is implemented and if the new formula is allowed as a 3rd Option in addition to Option 1 & 2 Recommended by the 7th CPC in the interest of natural justice to all Pre-2016 Pensioners.
2. It is, therefore, requested that the Pension of Pre-2016 Pensioners be fixed at the highest of the 3 Options – including first two Options as recommended by 7th CPC and 3rd Option as accepted by the Government and Notified vide DOP&PW OM Dated 12-5-2017.
Hoping for a favourable consideration & thanking you in anticipation. With kind regards,
Yours faithfully,
(Harchandan Singh) 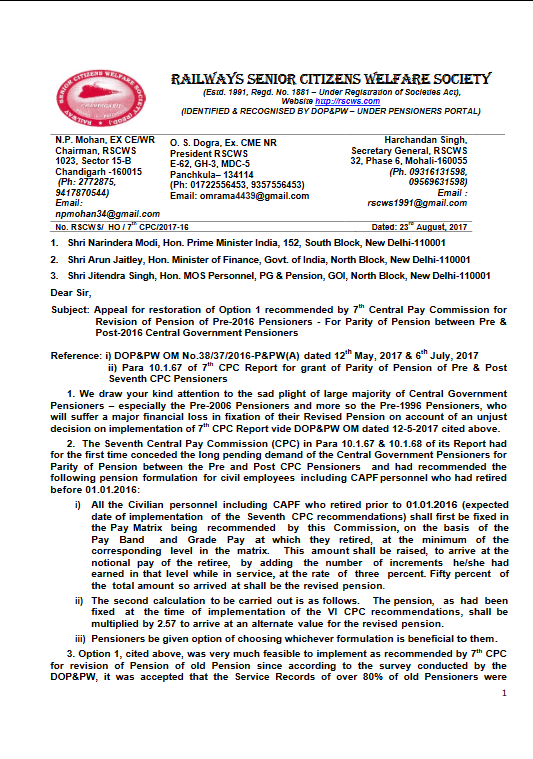 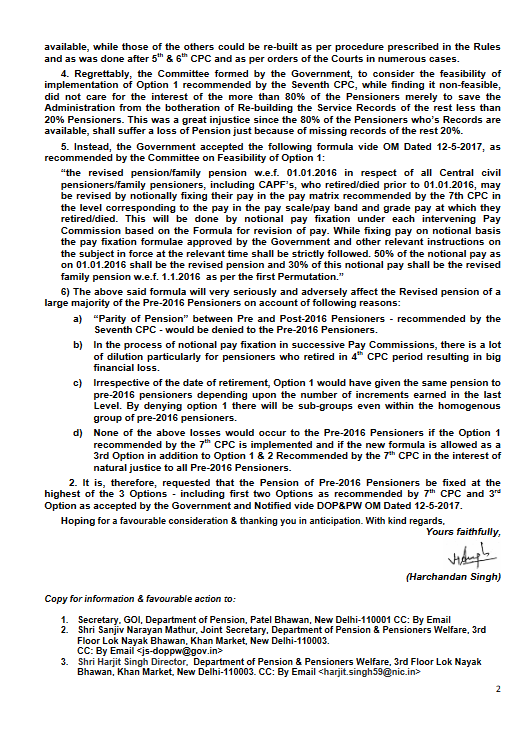