Subject: Dress Allowance to the Nursing Personnel – Implementation of the recommendations of the 7th Central Pay Commission – regarding

Consequent upon the decision taken by the Government of India on the recommendations of the 7th Pay Commission, in supersession of the existing orders relating to Uniform allowance and Washing Allowance, which have been subsumed in a single Dress Allowance, the President is pleased to decide the rates of Dress Allowance at the rate of Rs. 1800/- per month in respect of the Nursing Personnel of all categories at all levels working in Central Government / UT Hospitals / Institutions and Centrally funded autonomous Bodies like AIIMS, New Delhi, PGIMER, Chandigarh, JIPMER, Pondicherry etc., subject to the following conditions.
i. Allowance related to washing of Uniform are subsumed in Dress Allowance and will not be payable separately.
ii. The amount of Dress Allowance shall be credited to the salary of the employees directly once a year in the month of July.
iii. This allowance will not be treated as a part of pay as already decided vide Ministry of Health and Family Welfare Oder No. Z-28015 / 86 / 97-N dated 28th July, 1998.
2. The rates of Dress Allowance will go up by 25% each time Dearness Allowance rises by 50%.
3. The revised rates of allowances shall be admissible with effect from the 1st of July, 2017.
4. The additional expenditure on this allowance would be met by the respective institutions from their sanctioned budget.
5. This issues with the approval of SS&FA vide Dy.No.2897/ 17-IFD dated 10.08.2017 and Department of Expenditure vide ID Note No.300347605 / 2017 dated 24.08.2017.
Sd/-
(A K Sahoo)
Under Secretary to the Govt. of India
Source: Click on image to view/download the PDF 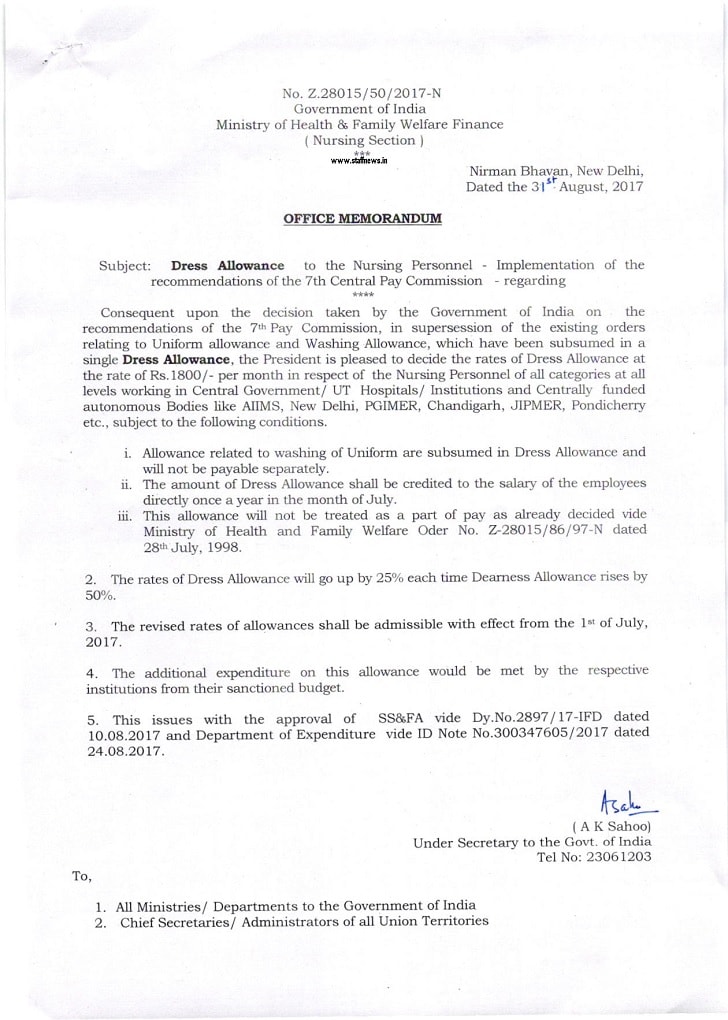