Reference:- IFA (WC) DO letter No. IFA/WC/25/Conservancy dated 30.08.2017.
Kindly refer to the letter cited above.
2. The references with regards to applicability of minimum wages notified by Central Govt/State Govt. and Contractor’s profit/service charges for outsourcing of conservancy services have been examined and point wise clarification on each issues is given below for further necessary action and guidance please.
(i) Point of doubt:- Applicability of rates of minimum wages notified by Central Govt. or State Govt. for outsourcing of conservancy services in non-cantonment military stations.
Clarification :- The rate fixed by the Central Labour Commissioner or the rate fixed by the State Government for the area and for the category i.e. skilled or unskilled, etc, whichever is higher will be admissible in the outsourcing contracts. This being the legal requirement the correct payment of Minimum wages rates corresponding to a particular category is to be ensured by all stakeholders by putting the clause upfront in the RFP/TE.
(ii) Point of doubt:- Contractor’s profit/ service charges on minimum wages for outsourcing of conservancy services in non-cantonment military stations – As per Ministry of Finance vide its OM No.29(1)/2014-PPD dated 28.1.2014, if a firm quotes NIL charges/ consideration the bid shall be treated as unresponsive and will not be considered. While in a separate clarification issued by Ministry of Commerce & industry vide their letter No.31/14/1000/2014-GA dated 17.9.2017, it has been mentioned that the quotations offered over and above the minimum wages of the Central/State Govt. (as applicable) pertaining to Service Charges/Administrative Charges quoted by the bidder necessarily has to be over and above Zero percent. Further zero percent included all derivatives of  zero up to 0.9999 and thereof. Any service charge not adhering to the above guidelines should be considered unresponsive and such bid should not be considerd.
Clarification:– The ruling of ministry of Commerce is not applicable to Ministry of Defence. However, there is no bar to apply the rule in case of outsourcing contracts, if CFA/IFA feels/believes that such a clause in RFP will be necessary to eliminate the unscrupulous vendors and in identifying the correct vendor for proper execution of such contracts to ensure value for Money. This clause could be considered at the pre-bid conference stage or for inclusion as a ‘Special condition of contract depending up on the level of competition, value of contract, past , records of vendors, concerns/complaints/delay noticed in the past concluded contracts.
This issues with the approval of Addl. CGDA (Fin)
sd/-
(Hari Har Mishra)
JT. CGDA (Fin)
Click on image to view/download signed pdf 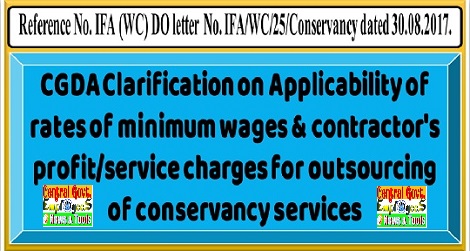