I am directed to refer to the above cited Hon’ble Supreme Court order and to convey sanction of the competent authority for grant of special pension under Regulation 95 of Navy (Pension) Regulations, 1964 to the Sailors appointed prior to 03rd July, 1976 and discharged on or after 03rd July, 1976 on expiry of 10 years of active service, subject to the following conditions:

(a) The Ex-Sailor was not and could not be drafted to Fleet Reserve Service because of the discontinuation of the Policy.

(b) The Ex-Sailor did not exercise the option to take discharge on expiry of engagement period i.e. the Sailor opted for retention in active service, but not granted extension to qualify for pensionable service.

2. Arrears to be paid w.e.f. three years preceding the date of filing of application by respective Ex-Sailors, along with interest on the arrears @ 9% pa. as per the Court order under reference.

3. – The amount of Gratuity and DCRG paid be adjusted against the amount payable. Necessary PPO may be issued immediately.

4. The expenditure incurred on this account will be paid under Charged Expenditure and be debited to the relevant Head of account.

(R.K. Arora)
Under Secretary to the Govt. of India
Click on Image to view/download signed pdf 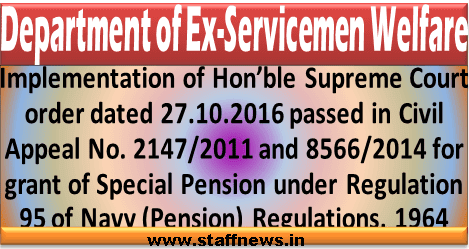