Clarification regarding calculation of quantum of Annual Increment in pay in case of Railway Staff: Railway Board

Kiran Kumari 0 November 28, 2017 3:28 am
Clarification regarding calculation of quantum of Annual Increment in pay in case of Railway Staff
GOVERNMENT OF INDIA
MINISTRY OF RAILWAYS
(RAILWAY BOARD)
No. PC-VI/2016/Z/4
Dated: 04.10.2017
OFFICE MEMORANDUM

Sub: Clarification regarding calculation of quantum of Annual Increment in pay in case of Running Staff.

Ref.: M/o Finance’s OM No. 332469/2016-E IIIA dated 01.02.2017;
The undersigned is directed to refer to this Ministry’s OM of even no. dated 30.08.2016 wherein an issue raised by one of the Staff Federations vide PNM Agenda Item No.10/2016 was referred to M/o Finance for examination. The Federation had demanded that the basic pay for the purpose of calculation of increment in the 6th CPC should include Pay element of Running Allowance for the Running staff. This meant that increment of Running Staff should be calculated @3 % of {Basic pay + pay element (presently 30% of Basic Pay)}.
2. This issue was examined in Pay Commission Dte. of Railway Board and a copy of reply sent to one of the Zonal Railways is enclosed as Annex-I.
3. As regards the queries raised by M/o Finance vide 011/1 dated 01.02.2017, it is clarified that a portion of Basic Pay of the Running Staff is treated as a “Pay element of running allowance” which itself falls outside the definition. of Basic Pay as defined in FR(9) (21)(a)(i) but falls in the broader definition of the term “pay” as in FR(9) (21)(a)(iii). The pay element at specified rates is counted for specified purposes only. As per Rule No. 25 of “The Rules for payment of Running and other Allowances to the Running Staff on Railways, 1981” read with para 3.23 of Railway Board’s letter No.E(P&A)II-80/RS- 10 dated 17.07.1981 (Annex-II), the pay element i.e. 30% of the Basic Pay of Running Staff will be reckoned as pay for specified purposes (not for all) such as Dearness Allowances, House Rent Allowance, entitlement to Passes, PTOs etc. It is pertinent to mention here that pay element is not reckoned as pay for Transport Allowance, Night Duty Allowance etc.
3.1 In accordance with para 2 of Board’s letter No. E(P&A) II-2005/RS-34 dated 26.12.2008 (RBE No.202/2008) (Annex-III}, pay element in the Running n Allowance for running staff would be 30% of the basic pay under Railway Service (Revised Pay) Rules,2008 for computation of specified benefits excluding retirement benefits. For the purpose of computation of retirement benefits of running staff, an additional quantum of 55% of the basic pay under RS(RP) Rules,2008 would be reckoned.
Sd/-
(U.K. Tiwari)
Deputy Director,
Pay Commission-VI
Railway Board. 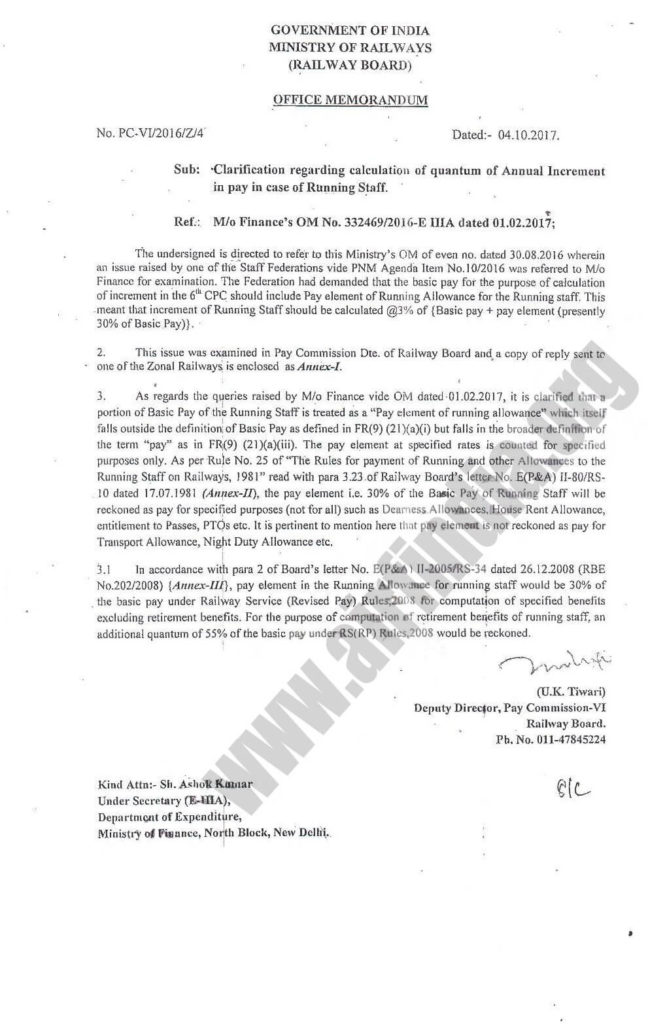