Kiran Kumari 0 November 20, 2017 2:27 am
Eligibility of widowed/divorced daughter for grant of Family Pension clarification – DESW Orders dt. 17.11.2017
No.1(9)/2013-D(Pen/Policy)
Government of India
Ministry of Defence
Department of Ex-Servicemen Welfare
New Delhi -110011
Dated 17th November, 2017
To
The Chief of the Army Staff
The Chief of the Naval Staff
The Chief or the Air Staff

The undersigned is directed to state that the provision for grant of family pension to a widowed/divorced daughter beyond the age of 25 years has been made vide GoI, Ministry of personnel, P.G. & Pensions, Department of Pension & Pensioners Welfare 0M No.1/19/03-(E) dated 2S.08.2004 Circulated vide GoI MOD letter No.878/A/D(Pen/Sers)/04 dated 21.09.2004 applying the same provision to the Armed Force Personnel.
2. It was clarified vide Government of India, Ministry of Personnel, P.G- & Pensions, Department of Pension & Pensioners Welfare OM No.1/13/09-P&PW (E) dated 11.09.2013 circulated vide MOD ID No.1(9)/2013/D(Pen/Pol) dated 16.09.2015, the family pension is payable to the children as they are considered to be dependent on the Government servant/pensioner or his/her spouse. A child who is not earning equal to or more than the sum of minimum family pension and dearness relief thereon is considered to be dependent on his/her parents. Therefore, only those children who are dependent and meet other conditions of eligibility for family pension at the time of death of the Government servant or his/her spouse, whichever is later, are eligible for family pension. If two or more children are eligible for family pension at that time, family pension will be payable to each child on his/her turn provided he/she is still eligible for family pension when the turn come. Accordingly, divorced daughters who fulfil other conditions are eligible for family pension if a decree of divorce had been issued by the competent court during the life time of at least one of the parents.
3. Grievances were being received from various quarters that the divorce proceedings are a long drawn procedure which take many years before attaining finality. There are many cases in which the divorce proceedings of a daughter of Government employee/pensioner had been instituted in the competent court during the life of one or both Government employee/pensioner & spouse, but none of them was alive by the time the decree of divorce was granted by the competent authority.
4. The matter has been examined in this department and it has been decided that the clarification “grant family pension to a divorced daughter in such cases where the divorce proceedings had been filed tn a competent court during the life time of the employee/pensioner or his/her spouse but divorce took place after their death-provided the claimant fulfils all other conditions for grant of family pension. In such cases, the family pension will commence from the date of divorce” given by Government of India. Ministry of Personnel, P.G. & Pensions’, Department of Pension & Pensioners Welfare vide 0M No.1/13/09- P&PW (E) dated 19.07.2017 would also apply mutatis mutandis to divorced daughters of Armed Force personnel.
5. This issues with the concurrence of the Finance Division of this Ministry vide their ID No.10(09)/2015/Fin/Pen dated 17.10.2017.
6. Hindi version will follow.
sd/-
(Manoj Sinha)
Under Secretary to the Govt. of India
Source: http://www.desw.gov.in/ 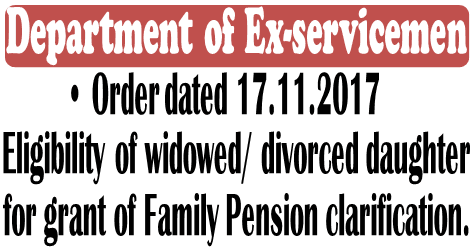