Subject:— Items proposed by the Staff-Side, NC(JCM) for discussion in the National Anomaly Committee — Comments of DoPT regarding.

I am directed to refer to your letters no. NC-JCM-2017/7th CPC Anomaly dated 16th August, 2017 and 31st August, 2017 with which a total of 18 items have been sent to DoPT for discussion in the NAC meetings. These 18 items are about various issues over which, the Staff-Side has opined, anomaly has arisen as a result of the 7th CPC’s recommendations or absence of them.

2 On the other hand, DoPT after examining them in the light of the three postulates which, as described in DoPT’s OM. No. 11/2/20164CA dated 16th August, 2016 and 20th February, 2017, would constitute anomaly is of the view that there are certain items in the lists sent which are not in accord with them and hence cannot be called anomalies as such notwithstanding the merit that they may have otherwise. There are also certain items which should be taken up at the Departmental Anomaly Committees of the other administrative Ministries concerned. A few items are those which, for a detailed examination, need more relevant documents/papers etc. These have been briefly described below:

3 Items to be taken up at the Departmental Anomaly Committees.

4 Item to be taken up separately with the Department of Pension.

Yours faithfully,
(D.K. Sengupta)
Deputy Secretary to the Government of India 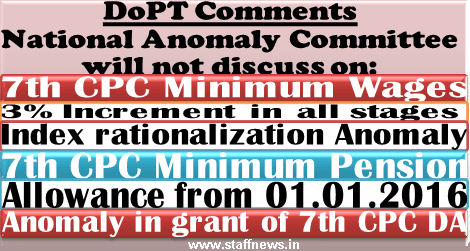