Subject: Classification of Posts under the CCS (CCA) Rules, 1965.

The undersigned is directed to refer to this Department’s Order No. 8.0. 3578 (E) dated 9.11.2017 regarding classification of civil posts under CCS (CCA) Rules, 1965. As per this order, all civil posts except person serving in the Indian Audit and Accounts Department under the Union are classified as follows:-
2. In some Ministries/ Departments, posts may exist which are not classified as per the norms laid down by this Department. If, for any specific reason, a Ministry/ Department proposes to classify the posts differently, it would be necessary for that Department to send a specific proposal to Department of Personnel and Training giving full justification in support of  the proposal within three months of this O.M. so that the exception to the norms of classification laid down in 8.0. 3578 (E) dated 9.11.2017 (copy enclosed) can be notified.
3. H1nd1 version will follow.
(Nitin Gupta)
Under Secretary to the Government of India 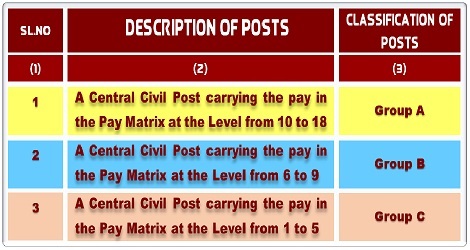