A copy of OFB Instruction bearing No. 3519/2017/PER/POL1CY and letter No.
658/NDA/Per/Policy dated 21/11/2017 on the subject matter is forwarded
herewith for information and necessary action please.

A copy of the same may please be forwarded to all Br. AOs under your
jurisdiction.


Sub : Night Duty Allowance (NDA) – clarification regarding fixation of
ceiling of pay for entitlement – regarding.

Attention is drawn to OFB instruction/circular cited under
Ref(ii)&(iii) above wherein the sanction for payment of MBA at revised
rates (as per 6th CPC pay) to the eligible civilian employees
working under MoD was conveyed.
02. However, owing to the confusion over the ceiling of pay for
entitlement/eligibility of employees for grant of NDA, the matter was taken
up with MoD for a clarification. Now, MOD vide Ref(i) above, considering
the provision in the DoPT OM dated 04/10/1989 that there shall be no
ceiling for entitlement of NDA in respect of such officials who were
getting this benefit of that point of time as per extant criteria, has advised OFB to issue a
one-time order specifying the designations/categories/levels of non-gazetted employees who were
getting this benefit of NDA in accordance with extant instructions, so as to ensure their seamless
deployment at night shifts and payment of NDA based on current pay.

03. In view of the above, it is hereby indicated that all employees in the
category of IEs/NIEs/NGOs, as per list enclosed at Annexure-I, are declared eligible
for grant of NDA based on the revised pay and allowances as per 6th CPC pay scales,
without any ceiling, till further order in this regard. However, all other terms and conditions laid down in
OFB instruction/circular cited at Ref(ii)&(iii) shall remain unchanged. 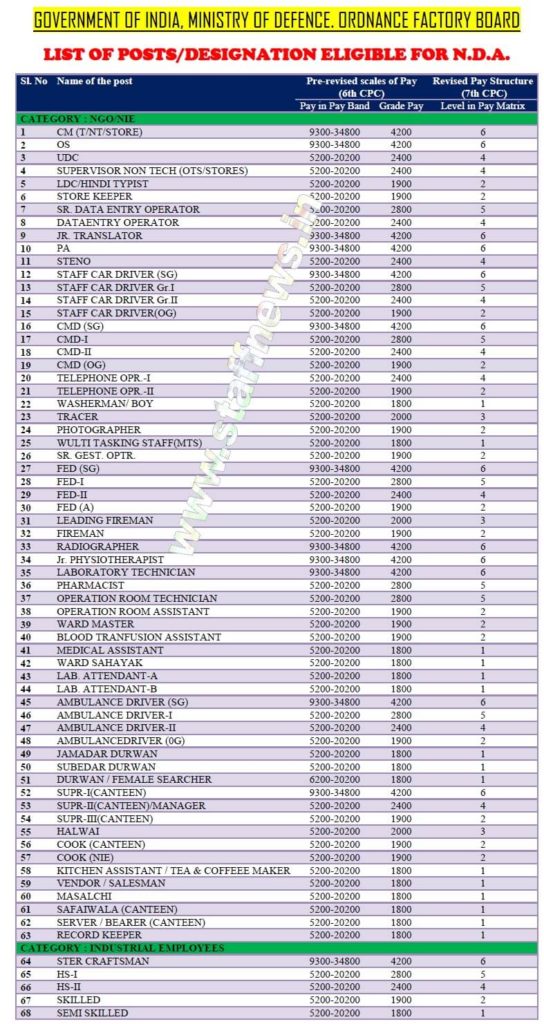 Loading...
Newer Post
Procedure for dealing with DAR case against Group ‘C’ and ‘D’ Railway Staff arising out of Vigilance investigation
Older Post
Court Cases relating to demand of Loco Inspectors for reckoning of pay element of 55% at the time of retirement- Railway Board Order dt. 04.12.2017