Dearness Allowance will continue to be paid as a separate component, and also revised from time to time whenever it is revised for Central Government Servants.
It is decided to continue the calculation of the ex-gratia bonus by applying the calculation ceiling of Rs.7000 as basic TRCA + DA till such time a new scheme is devised.
Arrears for the period 1.1.2016 to the date of implementation will be paid by increasing the basic TRCA drawn during the period by a factor of 2.57. The arrears will be paid in one instalment.
Annual increase at the rate of 3% and the same may be given on 1st January or 1st July of every year as the case may be based on the one time written request of GDSs.
A new Risk and hardship Allowance has been introduced. Other allowances Viz. Office maintenance allowance, Combined duty allowance, Cash conveyance charges, Cycle maintenance allowance, Boat allowance and Fixed Stationery Charges have been revised.
Further, the Mizoram government has also decided to  pay enhanced pay scales to the state government employees in relation with recommendations under 7CPC.
The state government employees would get enhanced pay effective from January 1, 2016 but would enjoy financial benefits with effect from September 1, 2018, the officials said in The Financial Express.
Reportedly, the decision of the state cabinet would benefit around 42,000 regular employees and other employees numbering around 34,000.
While these employees will see ‘ache din’ in their pay scale, 48 central government employees still struggle.
Meanwhile, central government employees want fitment factor of 3.68 times with minimum pay scale of Rs 26,000. This is after the Union Cabinet revised their minimum pay to Rs 18,000 from previous Rs 7,000 per month, along with fitment factor of 2.57 in June 2016 leading to a major hike in all central government employees salaries.
It was known that, the government may hike minimum pay to Rs 21,000 and fitment factor to 3.00 times. However, the NDA government at centre claimed that they are not really looking to hike minimum pay beyond the recommendations provided in the 7th CPC report. 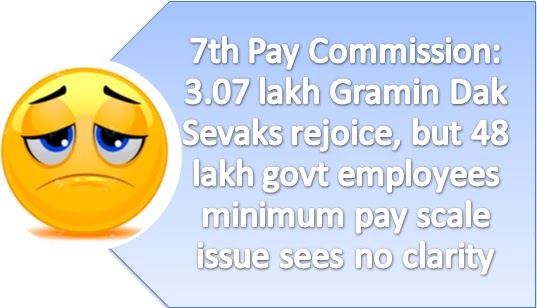