RAMESH BAIS Will the Minister of FINANCE be pleased to state:-
(a) whether the Dearness Relief of 119 per cent as effective from 1st July, 2015 was the last one taken into consideration by the 7th Central Pay Commission (CPC) while recommending the formulae for revision of pension for civilian personnel including Central Armed Police Forces (CAPF) who retired before 01.01.2016 and if so, the details thereof;
(b) whether the retirees were in receipt of six per cent Dearness Allowance (DA) w.e.f. 01.01.2016 till the implementation of the Pay Commission Report and if so, the details thereof;
(c) whether at the time of implementation of 7th CPC Report, the six per cent has been denied and if so, the reasons therefor; and
(d) the remedial measures taken/being taken by the Government to remove their hardship and to restore the DA denied to them?

MINISTER OF STATE FOR FINANCE
(SHRI P. RADHAKRISHNAN)
(a) to (c) : The pension of Central Government employees including personnel of Central Armed Police Forces (CAPF), who retired prior to 1.1.2016, has been revised w.e.f. 1.1.2016 based on the recommendations of 7th Central Pay Commission (CPC), as accepted by the Government, taking into account Dearness Relief @ 125%.
(d): Does not arise. 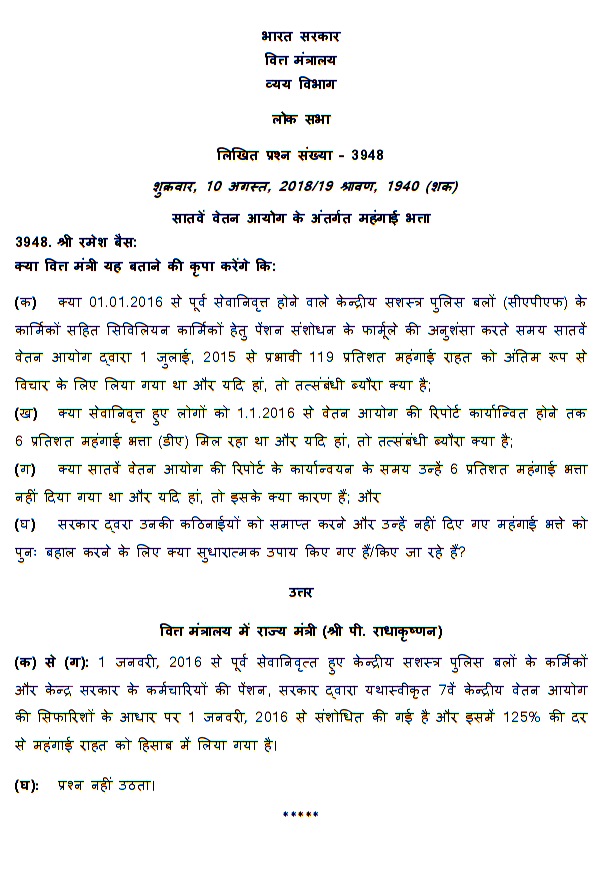