Sub: One Rank One Pension to the Defence Force Personnel.

Sir,
The undersigned is directed to refer to this Ministry’s letter No. 12(1)/2014/D(Pen/Policy)-Part-II dated 03.02.2016,. appending 101 pension tables indicating rates of pension/family pension under OROP scheme notified vide this Ministry’s letter No. 12(1)/2014/D(Pen/Pol)-Part-II dated 07.11.2015.
2. As per Para-3 of GoI, MoD letter No. 12(1)/2014/D(Pen/Pol)-Part-II dated 07.11.2015, OROP tables had been prepared on the basis of the average of minimum and maximum pension of personnel retired in 2013 in the same rank and with same length of service. However, in preparing the tables of EC/SSC officer (other than medical officers) data of pension of Cdr, (Lt. Col. in Army) was inadvertently taken as pension of Lt. Cdr. (Major in Army). This has affected tables No. 5, 14, 23, 32, 41, 50, 63, 64, 74, 83 and 92. The modified tables are enclosed herewith. Pension of the affected pensioners may be revised according to amended tables. However, if pension revised in these cases according to amended tables w.e.f, 1.7.2014 is less than the pension as on 30.06.2014, the same will not be revised to the disadvantage to the pensioner.
3. Further, in table No. 7, the pension rate of Hony, Nb. Subedar with qualifying service of 13 years has not been protected with reference to the lower rank viz. Havildar of same qualifying service i.e. 13 years. As such following amendment may be carried out in table No. 7 :
4. Any arrears/recovery of over payment pension would have to be adjusted by the concerned PDAs as per the extant rules/procedure.

5. All the terms and conditions which are not affected by this order shall remain unchanged.
6. This issue with the concurrence of Finance Division of this Ministry vide their ID No. PC.I. to 10(11)/2012/Fin/Pen dated 14.08.2018.
7. Hindi version will follow.
Yours faithfully,
(Manoj Sinha)
Under Secretary to the Government of India
One Rank One Pension (OROP) Corrigendum Tables for EC/SSC Officers (Other than AMC/ADC/RVC) 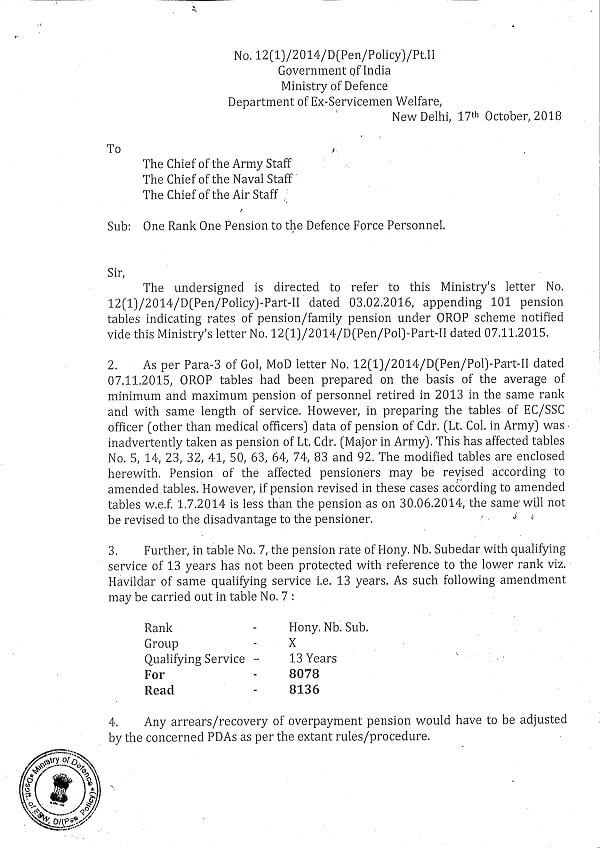 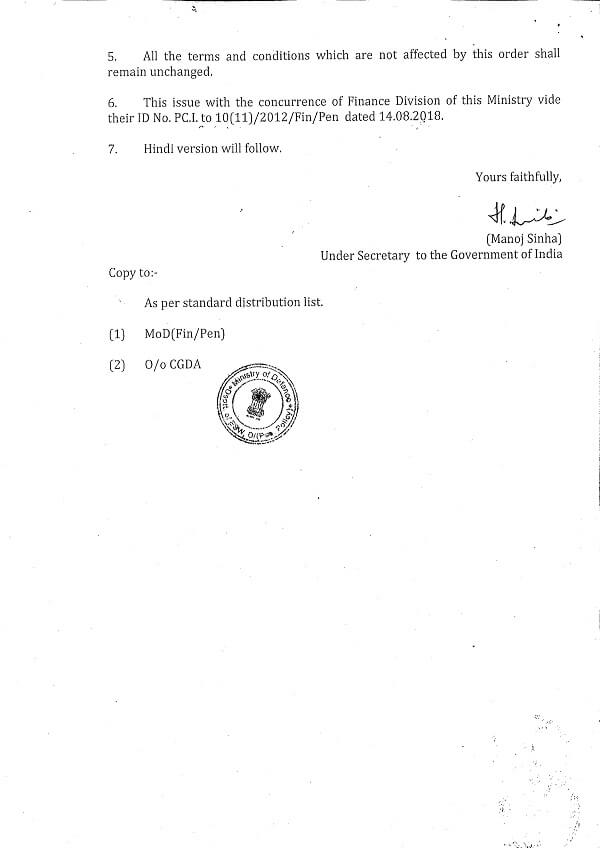 Loading...
Newer Post
One Rank One Pension (OROP) Corrigendum Tables for EC/SSC Officers (Other than AMC/ADC/RVC)
Older Post
LTC travel entitlement by Air for Level 6 to 8 during 13.07.2017 to 19.09.2017 – Claims allowed for reimbursement: DoPT OM