The undersigned is directed to refer to this Department’s O.M.of even no. dated 19.09.2017 on the subject noted above, which inter-alia provides that the travel entitlements of Government servants for the purpose of LTC shall be the same as TA entitlements as notified vide Ministry of Finance’s O.M. No. 19030/1/2017-E.IV dated 13.07.2017, except the air travel entitlement for Level 6 to Level 8 of the Pay Matrix, which is allowed in respect of TA only and not for LTC.
2. It is observed that many Government employees in Level 6 to Level 8 of the Pay Matrix had inadvertently travelled by air on LTC during the intervening period from 13.07.2017 to 19.09.2017 (i.e. post issue of MoF’s O.M. dated 13.07.2017 and before the issue of DoPT’s O.M. dated 19.09.2017) under the impression that they were entitled for air travel as per the revised TA rules. This Department is in receipt of references from the Government employees and various Ministries/Departments seeking relaxation in respect of such Government employees in view of the hardships faced by them in settlement of their LTC claims.
3. The matter has been examined in this Department in consultation with Department of Expenditure. In relaxation to this Department’s O.M. of even no. dated 19.09.2017, it has been decided to allow the claims of the Government employees in Level 6 to Level 8 of the Pay Matrix, who had travelled by air as per the revised TA rules while availing LTC during 13.07.2017 to 19.09.2017. This shall be subject to the fulfillment of other conditions of air travel on LTC such as booking of air tickets through the authorised modes, fare limit of LTC 80, etc.
4. Hindi version will follow.
(Surya Narayan Jha)
Under Secretary to the Government of India 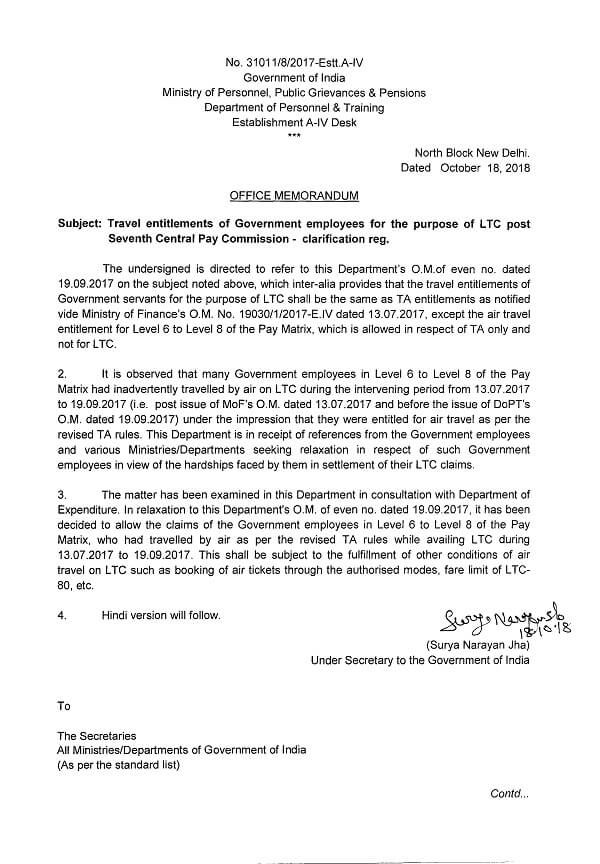