Sub: Revision of pension of pre-2016 pensioners – Stagnation increment regarding

The undersigned is directed to say that in pursuance of the decision taken by the Government on the recommendations of the 7th CPC, orders were issued vide this Deptt’s OM of even number dated 12.5.2017 for revision of pension/family pension in respect of pre-2016 pensioners/family pensioners by notionally fixing pay in the pay matrix recommended by the 7th CPC in the level corresponding to the pay in the pay scale/pay band and grade pay at which the Government servant/pensioner retired/died. Concordance tables for fixation of notional pay /pension of pre-2016 pensioners were issued vide this Department’s OM of even number dated 6.7.2017.
2. References/representations have been received in this Department seeking clarification on the applicability of the OM dated 7.9.2016 for the purpose of notional pay fixation and revision of pension of pre-2016 pensioners and family pensioners w.e.f. 1.1.2016. The matter has been examined in consultation with the Ministry of Finance (Department of Expenditure). It is clarified that the benefit of additional increment has been granted to those officers who were serving as on 1.1.2016. Those who retired/died before 1.1.2016 are, therefore, not eligible for increment after retirement for the purpose of pension.
3. This issues with the approval of Department of Expenditure vide their I.D. No.1(3)/V-V/2018 dated 4.9.2018 and I.D. No.1(3)/V-V/2018 dated 28.11.2018
(S.K. Makkar)
Under Secretary to the Government of India 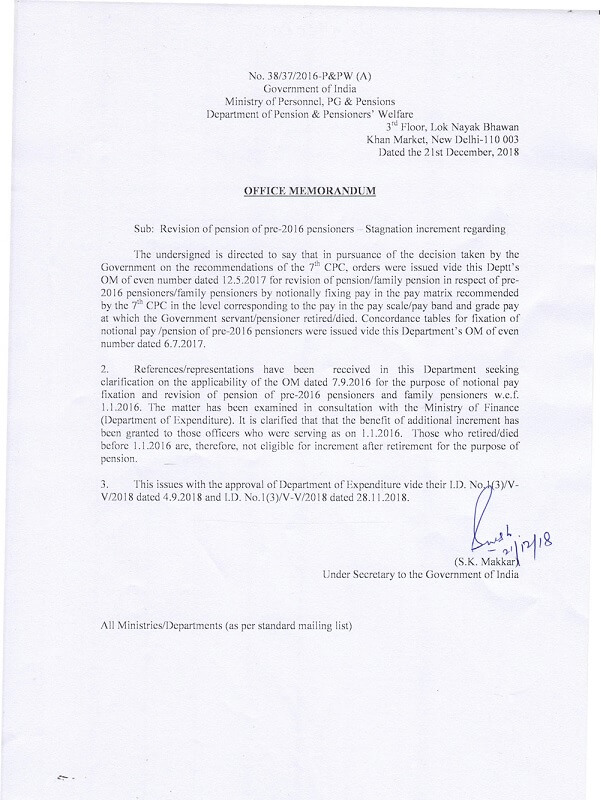