Sir,
I am directed to say that as per extant instructions, non functional Grade Pay of Rs. 5400 in PB-2 (pre-revised) is granted to those Superitendents/ Appraisers who have completed 4 years of regular service in the Grade Pay of Rs. 4800/, Shri M. Subramaniam, the then Inspector who was granted Grade pay of Rs. 4800/- due to ACP scheme, got favorable judgement from the Hon’ble High Court of Madras and Civil Appeal No. 8883/2011 filed by UOI was dismissed by the Hon’ble Supreme Court. Review Petition in the said case was also dismissed by the Hon’ble Supreme Court.
2. Consequent upon dismissal of Civil Appeal No. 8883/2011 and Review Petition in Civil Appeal filed by UOI by Hon’ble Supreme Court, the judgement of Hon’ble High Court of Madras in M. Subramaniam has been implemented in consultation with D/o Expenditure.
3. Keeping in view a number of similar court cases in different Benches of CAT/Court being decided by CAT/High Court, in favour of petitioners, the matter was examined in the Board and a proposal was referred to D/o Expendiutre to consider extension of the benefit of the direction of the Hon’ble High Court in M. Subramaniam, to all similarly placed officers. Deptt.Of Expenditure vide note dated 12.11.2018 examined the matter and sought following clarifications:-


(i) How many individuals of which posts have been allowed the benefit so far?
(ii) How many similarly placed persons are to be covered in the benefit?
(iii) Whether the similarly placed persons are holder of the same post which was held by the individuals covered in the SLP?
(iv) The financial implications on the benefit already allowed and the estimated financial implication on the similarly placed employees?
4. The details sought by D/o Expenditure vide note dated 12.11.2018 needs to be compiled from the Zonal Commissionerates. You are requested to kindly obtain the details/ information on the points mentioned above from Zonal Commissionerate, compile it and furnish the same to the Board for taking up the matter with D/o Expenditure. Since a number of court cases are pending in CAT/High Court, it is requested to expedite this exercise and detail/information be made available to the Board, by 20.12.2018.
Yours faithfully,
(M. K. Gupta)
Under Secretary to the Government of India
Tele: 011-23095528 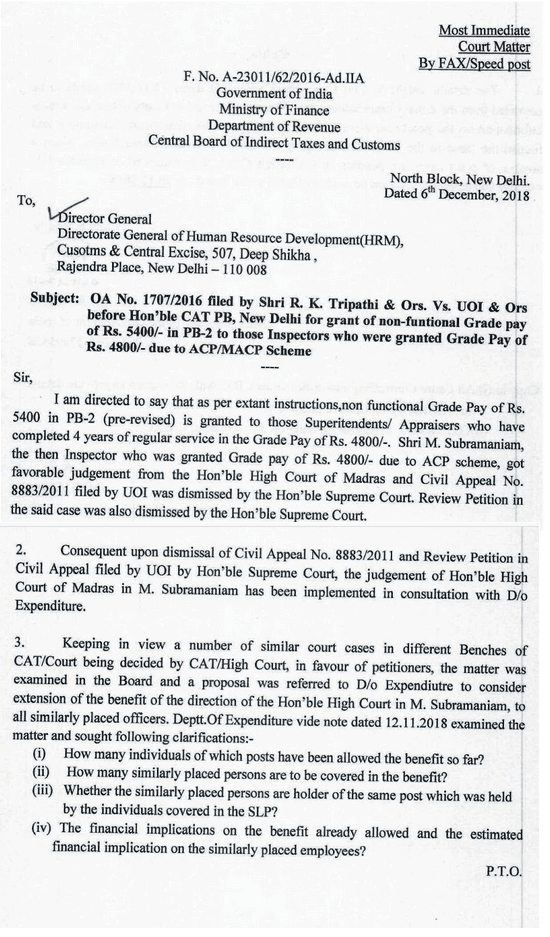 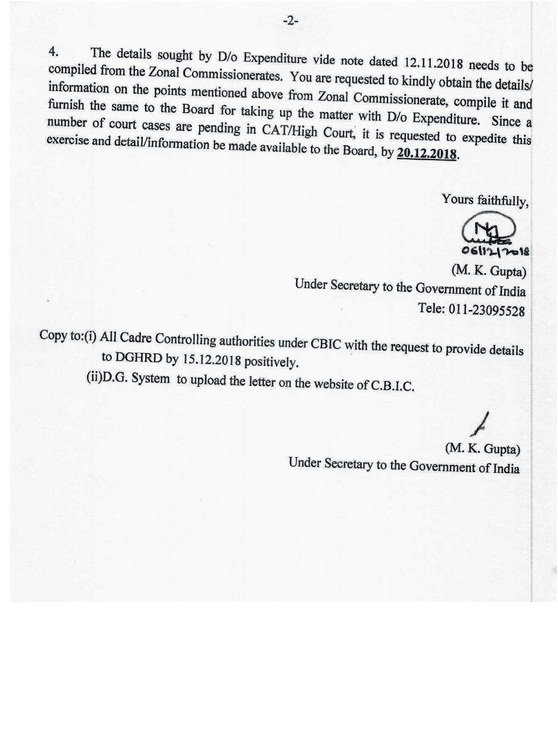