Sub: Availability of option for fixation of pay on MACPS from the date of next increment (DNI) in the lower post and method of fixation of pay from DNI, if opted for, in context of RS(RP) Rules, 2016 regarding.

2. Further to the above, DOP&T. vide their OM dated 20-9-2018 (copy
enclosed) has now conveyed a decision, taken in consultation with Department of Expenditure
that the aforesaid DOP&T’s OMs dated 27-7-2017 and 28-8-2018 (adopted vide Board’s letter
dated 31-7-2017 and 20-9-2018 respectively) are also applicable in the cases of pay
fixation after grant of financial upgradation under MACPS.

4. This issues with the concurrence of the Finance Directorate of the
Ministry of Railways.

DA: As above.
(Subhankar Dutta) 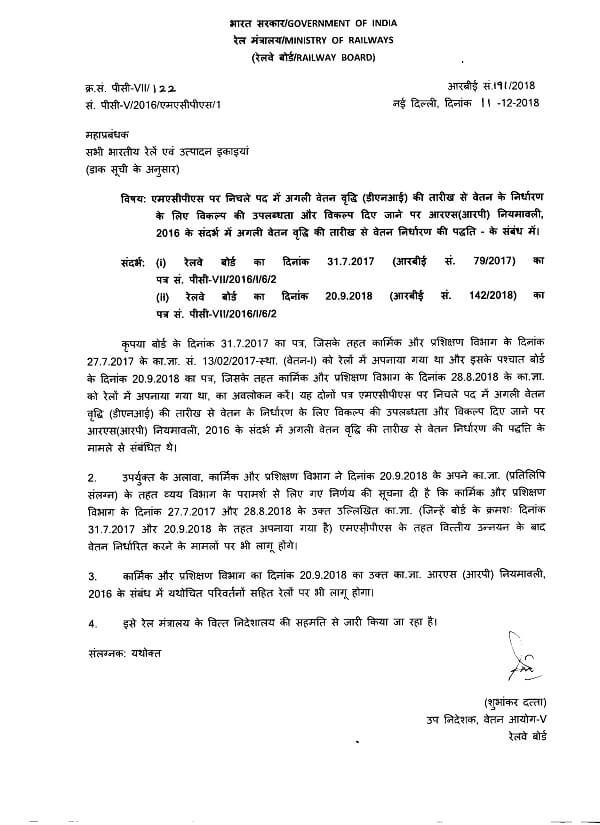 Loading...
Newer Post
Enhancement of combined Reservation Quota of lower berths for senior citizens and female passengers
Older Post
Gramin Dak Sevak: Emergency Leave for a maximum of 5 days in a calendar year for all categories