Kiran Kumari 0 January 21, 2019 4:08 pm
NPS is expected to provide old age income security to subscribers: Finance Minister has replied to Shri Nitin Gadkari, Minister of Water Resources on the issue of issue of scrapping of New Pension Scheme.
D.O. No.8/5/2018-PR
Arun Jaitley
Minister of Finance and Corporate Affairs
India
Dated the 03 January, 2019
Dear Shri Nitin Gadkari
This has reference to your D.O. letter dated 28.10.2018 regarding the National Pension System (NPS).
2. I would like to apprise you that due to fiscal stress on account of old defined benefit pension system, the Government of India made a conscious move to shift from the old pension scheme to a defined contribution pension scheme now renamed as the National Pension System (NPS). NPS was made applicable for all new entrants who joined Central Government service on or after 01.2004, except the Armed Forces. Subsequently, all State Governments excluding West Bengal have also switched to NPS for their employees.
3. NPS is being administered and regulated by Pension Fund Regulatory & Development Authority (PFRDA) in a professional manner. The investments of the accumulated corpus are made in a balanced proportion between equities, government securities and corporate bonds so as to reduce risk or spread risk whilst ensuring optimal returns. Three partial withdrawals, not exceeding 25% of the contribution made by the subscriber are also allowed under NPS for specific
4. The Union Cabinet has recently approved various proposals for streamlining NPS for Central Government employees which inter alia include enhancement of the Government’s contribution from the existing 10% to 14% of the employee’s pay + DA while keeping the employee’s contribution at the existing 10%, providing freedom of choice for selection of Pension Funds and pattern of investment to subscribers, payment of compensation for non-deposit or delayed deposit of NPS contributions during 2004-2012, providing tax deduction to the contribution made under Tier-II of NPS under Section 80 C for deduction up to Rs.1.50 lakh provided that there is a lock-in period of 3 years and increase in the tax exemption limit for lump sum withdrawal on exit from the existing 40% to 60% making the entire withdrawal exempt from income tax.
5. NPS is expected to provide old age income security to subscribers besides providing capital for the social and economic development of the economy.
With regards,
Yours sincerely,
(Arun Jaitley)
Shri Nitin Gadkari,
Minister of Water Resources
River Development, Ganga Rejuvenation,
Road Transport, Highways and Shipping,
Room No. 210, Shram Shakti Bhawan, New Delhi – 110001 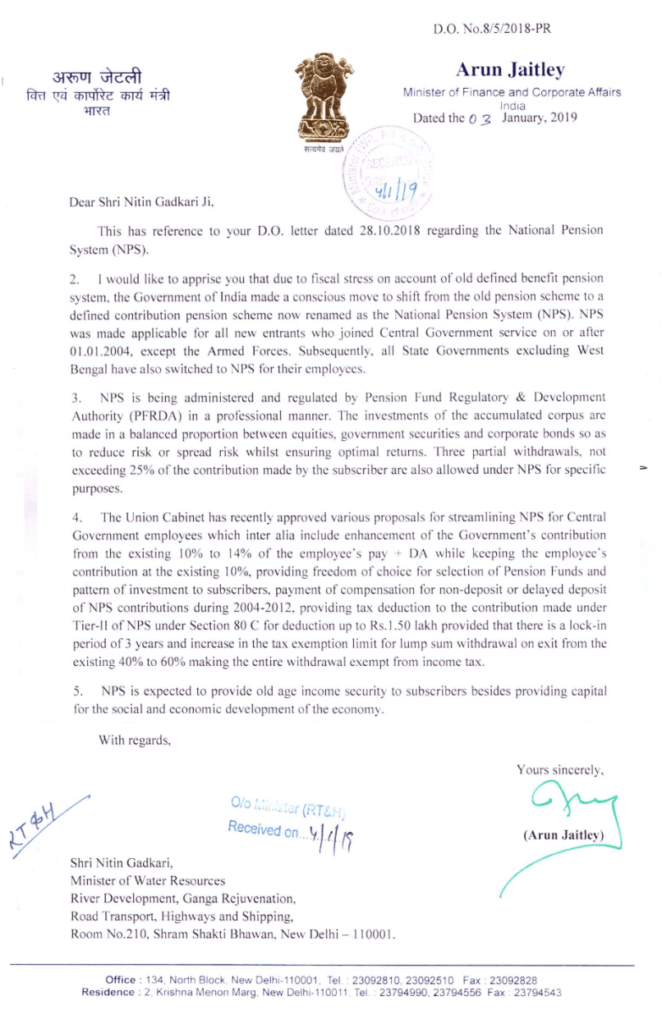