Revision of Limit of Transactions in Shares and Securities for CG Employees and Officers – Form of Intimation: CCS (Conduct) Rules, 1964

Subject: CCS (Conduct) Rules, 1964 – Revision in limit for intimation in respect of transactions in sale and purchase of shares, securities, debentures etc.

The undersigned is directed to refer to this Department’s O.M. No.11013/ 6/91-Et.(A) dated 08.04.1992 prescribing the following limit of transactions in shares, securities, debentures or mutual funds scheme, etc for intimation to Government in a prescribed format:
(i) Group ‘A’ and ‘B’ Officers – If the total transaction in shares, securities, debentures or mutual funds scheme etc. exceeds Rs. 50,000/- during the calendar year.
(ii) Group ‘C’ and ‘D’ Officers – If the total transaction in shares, securities, debentures or mutual funds scheme etc. exceeds Rs. 25,000/- during calendar year.
2. Sub-rule (1) of the Rule 16 provides that no Government servant shall speculate in any stock, share or other investment. It has also been explained that frequent purchase or sale or both, of share, securities or others investments shall be deemed to be speculation within the meaning of this sub rule. But, the occasional investments made through stock brokers or other persons duly authorized and licensed or who have obtained a certificate of registration under the relevant laws is allowed in this rule. With a view to enable the administrative authorities to keep a watch over such transaction, it has been decided that an intimation may be sent in the enclosed proforma to the prescribed authority in respect of all Government servants, if the total transactions in shares, securities, debentures, mutual funds scheme, etc. exceeds six months’ basic pay of Government servant during the calendar year (to be submitted by 31st January of subsequent calendar year).
3. It is also clarified that since shares, securities, debentures, etc. are treated as movable property for the purpose of Rule 18(3) of CCS(Conduct) Rules, 1964, if an individual transaction exceeds the amount prescribed in Rule 18(3), the intimation to the prescribed authority would still be necessary.
The intimation prescribed in para 2 above will be in addition to this, where cumulative transaction(s) i.e. sale, purchase or both in shares, securities, debentures or mutual funds, etc. in a year exceed the limits indicated in para 2 above.
4. This Office Memorandum issues in supersession of this Department’s O.M. No. 11013/ 6/91-Ests.(A) dated 08.04. 1992.
5. In so far as the personnel serving in Indian Audit and Accounts Department are concerned, these instructions are being issued after consultation with the Comptroller and Auditor General of India.
6. All Ministries/ Departments are requested to bring these instructions to the notice of all concerned authorities under their control.
7. Hindi version will follow.
sd/-
(Satish Kumar)
Under Secretary to the Govt. of India 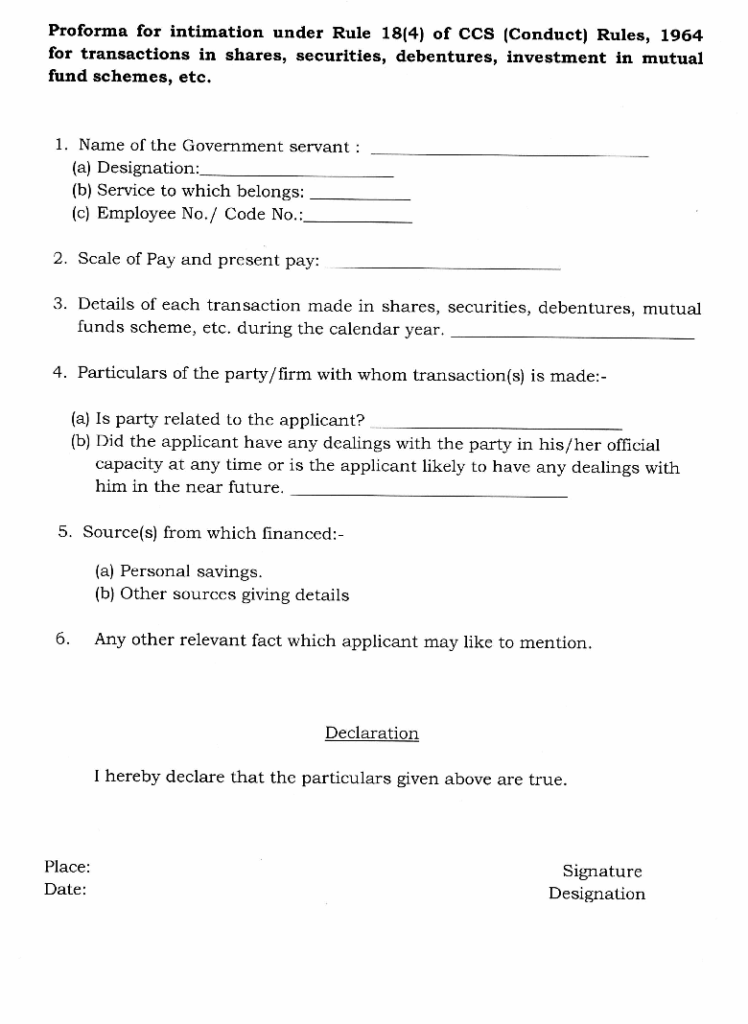