Kiran Kumari 0 June 25, 2019 1:59 am
EPF Pension: Increase in Minimum Pension, Commutation of Pension, Committee for study of the issue of Pensioners
GOVERNMENT OF INDIA
MINISTRY OF LABOUR AND EMPLOYMENT
LOK SABHA
STARRED QUESTION NO: 23
ANSWERED ON: 24.06.2019
EPF Pension
N.K. Premachandran
Will the Minister of LABOUR AND EMPLOYMENT be pleased to state:-
(a) whether the Government has received report from the Committee appointed for study of the issues of EPF pensioners and if so, the details thereof;
(b) the details of the recommendations of the said Committee;
(c) whether the Government has initiated action for implementation of the recommendations of the said Committee and if so, the details thereof;
(d) whether the Government proposes to increase the minimum pension for EPF pensioners and if so, the details thereof; and
(e) whether the Government also proposes to stop the realisation of amount from the pension on account of commutation of pension after realising the commuted amount and if so, the details thereof?
ANSWER
MINISTER OF STATE (IC) FOR LABOUR AND EMPLOYMENT
(SHRI SANTOSH KUMAR GANGWAR)
(a) to (e): A statement is laid on the Table of the House.
* ******
STATEMENT REFERRED TO IN REPLY TO PARTS (a) TO (e) OF LOK SABHA STARRED QUESTION NO. 23 TO BE ANSWERED ON 24.06.2019 BY
SHRI N.K. PREMACHANDRAN REGARDING EPF PENSION.
(a) & (b): Yes, Sir. The Committee appointed for Evaluation and Review of the Employees’ Pension Scheme, 1995, headed by Additional Secretary, Ministry of Labour and Employment has submitted the report on 21st December, 2018. The report inter-alia has given observations/ recommendations on the following issues:
i. Increase of Minimum Monthly Member Pension
ii. Period over which the Average Pensionable Salary is calculated
iii. Restoration of commuted value of pension
iv. Re-introduction of the provision for commutation of pension
v. Restoration of the provision of Return of Capital
vi. Linking the monthly pension with cost of living index
vii. Issues of payment of pension on higher/actual wages to employees of exempted establishments.
As far as pension on higher wages is concerned, the issue is sub-judice.
(c): The consultation process on the recommendations/observations on the Committee’s report has been initiated with Employees’ Provident Fund Organisation (EPFO) and Central Board of Trustees (CBT). CBT is a tripartite body representing trade unions, employers besides representatives of Central and State Governments.
(d): The decision on increase of minimum pension for EPF is dependent on the outcome of the consultation process and has impact on Budgetary resources of the Government as the Committee has recommended that increase in pension has to come from the Budgetary resources.
(e): No decision has been taken to restore the commuted value of pension, as it has implications on sustainability of the funds under Employees’ Pension Scheme, maintained by EPFO.
******* 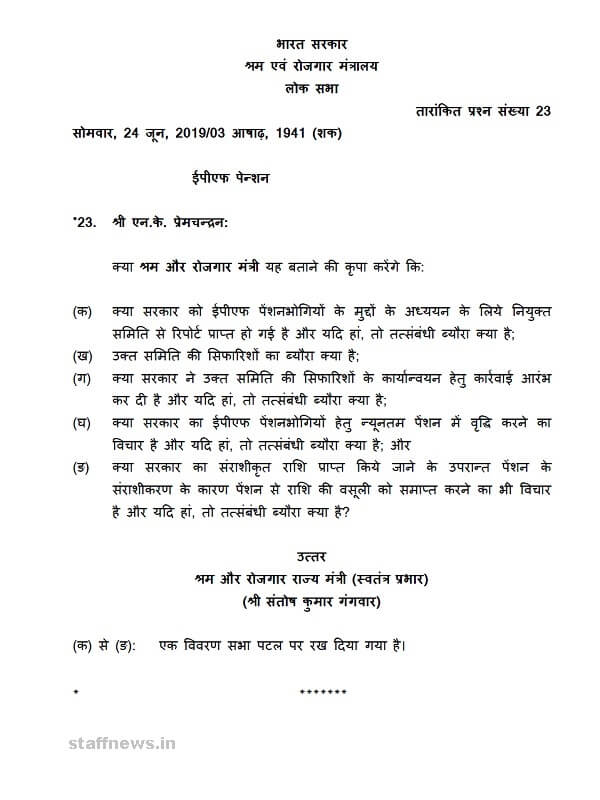 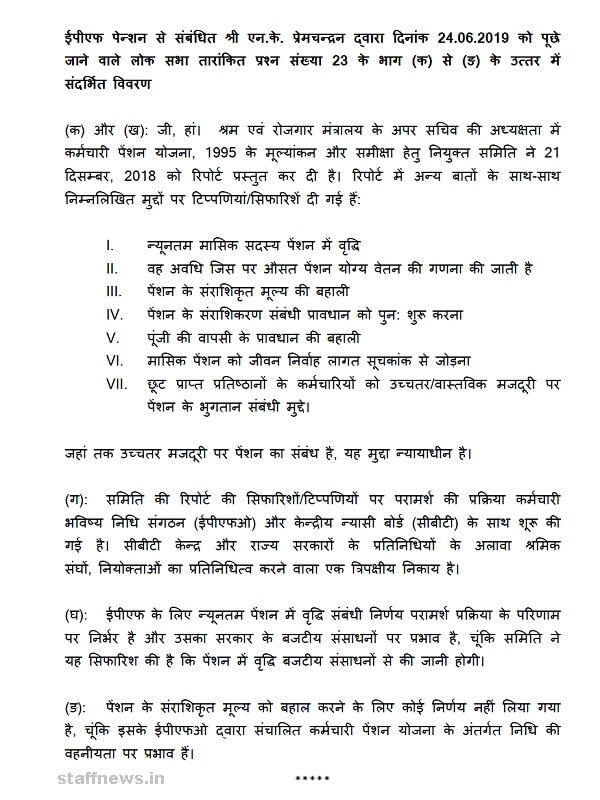 Loading...
Newer Post
Shortage of Doctors in the CGHS Dispensaries, details of engagement of retired doctors
Older Post
Procedure for release of accommodation out of Emergency Quota in Train: Railway Board Order on misuse the facility

Dharampal Kadian: I think it is not one rank one pension but created difference between the pension of pre 2016 and post 2016 JCO and or for X group pension there are two different table table no 7 for pre 2016 pensioner and table no 8 for post 2016.