The undersigned is directed to say that the following rules of Central Civil Services (Conduct) Rules, 1964 prescribing ceiling for receiving gifts by Government servants, have been amended vide G.S.R. No. 531 (E) dated 29.07.2019 (copy enclosed) so as to bring the uniformity in provisions of CCS (Conduct) Rules, 1964, AIS (Conduct) Rules, 1968 and Foreign Contribution (Acceptance or Retention of Gifts or Presentations) Rules, 2012:
2. All Ministries/ Departments/Offices are requested to bring the above amendments to the notice of all administrative authorities under their control.

(Satish Kumar)
Under Secretary to the Govt. of India


MINISTRY OF PERSONNEL, PUBLIC GRIEVANCES AND PENSIONS
(Department of Personnel and Training)

G.S.R. 531(E).-In exercise of the powers conferred by the proviso to article 309 and clause (5) of article 148 of the Constitution and after consultation with the Comptroller and Auditor General of India in relation to persons serving in the Indian Audit and Accounts Department, the President hereby makes the following rules further to amend the Central Civil Services (Conduct) Rules, 1964, namely:-

(2) They shall come into force on the date of its publication in the Official Gazette.

“(i) rupees five thousand in the case of a Government servant holding any Group ‘A’ or Group ‘B’ post; and

(ii) rupees two thousand in the case of a Government servant holding any Group ‘C’ post.”;

(b) for sub-rule (4), the following sub-rule shall be substituted, namely:-

“Notwithstanding anything contained in sub-rules (2) and (3), a Government servant, being a member of the Indian delegation or otherwise, may receive and retain gifts from foreign dignitaries in accordance with the provisions of the Foreign Contribution (Acceptance or Retention of Gifts or Presentations) Rules, 2012, as amended from time to time.”.
[F. No. 11013/02/2019-Estt.A-III]
SUJATA CHATURVEDI, Addl. Secy.
Note : The Principal rules were published in the Gazette of India, Part II, Section 3, Sub-section (ii), vide S.O. No. 4177 dated the 12th December, 1964 and subsequently amended as follows:- 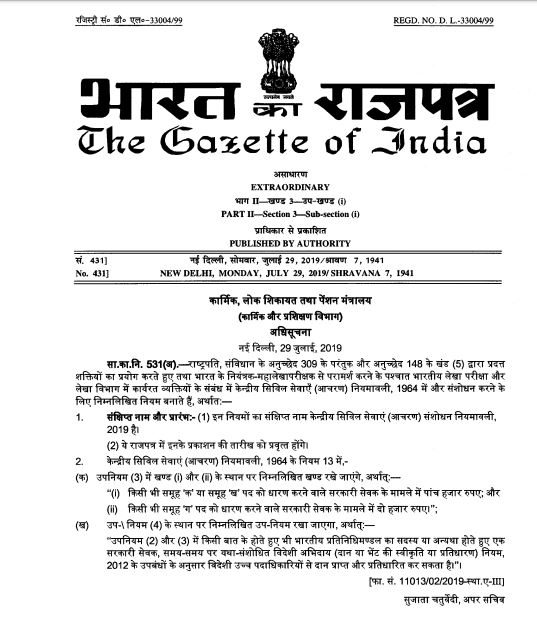