Additional Relief on Death/ Disability under NPS: Accounting Procedure for crediting the amount withdrawn by the pensioner from PFRDA

Subject: Accounting Procedure for crediting the amount withdrawn by the pensioner from PFRDA and interest thereon in to Government Account for availing benefit of Additional Relief on Death/ Disability of the Govt Servant covered under NPS-reg.

Attention is invited to DP&PW OM. No. 38/41/06/P&PW(A) dated 05.05.2009 to be read with OM No. 28/03/2018-P&PW(B) dated 02.04.2018 wherein it is stated the “The Exit and Withdrawals under N PS regulations 2015 provides in para 6(e) that if the subscriber or the family members of the deceased subscriber, upon his death, avails the option of additional relief on death or disability provided by the Government, the Government shall have right to adjust or seek transfer of the entire accumulated pension wealth of the subscriber to itself. The subscriber or family members of the subscriber availing such benefit shall specifically and unconditionally agree and undertake to transfer the entire accumulated pension wealth to the Government, In lieu of enjoying or obtaining such additional reliefs like family pension or disability pension or any other pensionary benefits from such Government authority.” It is also stated in the OM dated 02.04.2018 that “the family of the deceased Govt. servant is entitled to family pension under old pension scheme, if they want to avail the benefits under old pension scheme. In this case the entire accumulated funds under NPS may be recovered from the family with interest However, the possibility to adjust the recovery of accumulated wealth from arrears of family pension may also be explored. “
2. References have been received from the Pay & Account Offices for accounti ng procedure for N PS corpus deposited by the pensioner/family pensioner or received from PFRDA.
3. O/o the CGA vide its U O no. 1(7)(2)/2010/Cla/TA/205 dated 05.08.2019 has suggested the accounting procedure for the amount of NPS corpus received from pensioner/family pensioner/ PFRDA as under:
i) The amount received may be deposited into the existing government account of the PAO concerned.
ii) The receipt may be accounted for by crediting MH 0071-Contributions and Recoveries towards Pension and other retirement benefits, 01- Civil. Minor Head 101-Subscriptions and Contributions. A new sub-head ‘Accumulated Pension Wealth in respect of N PS subscribers’ may be got opened under the above head for the purpose, if already not opened.
4. All the Pr. CCAs/CCAs/CAs/ AGs/Administrators of UTs are requested to instruct concerned PAOs to follow the accounting procedure mentioned above.
Sd/-
(Md. Shahid Kamal Ansari)
(Dy. Controller of Accounts) 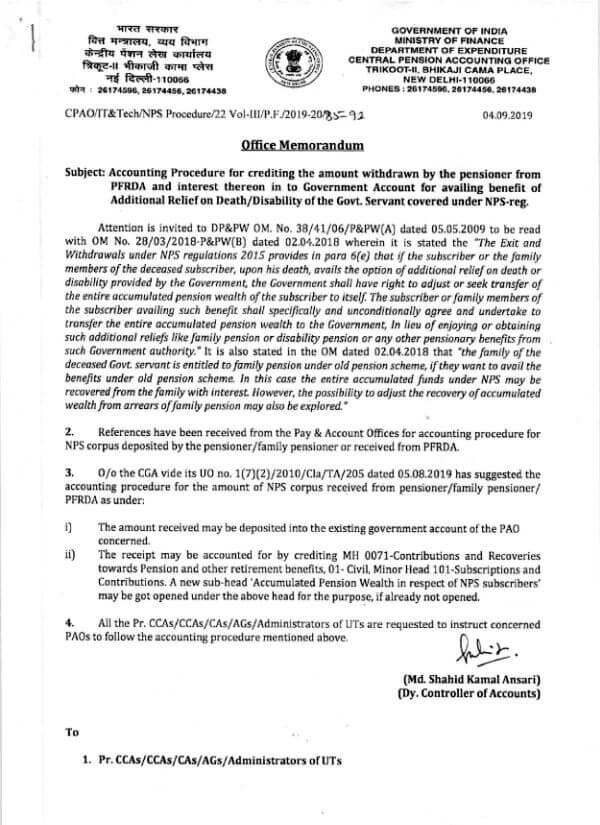