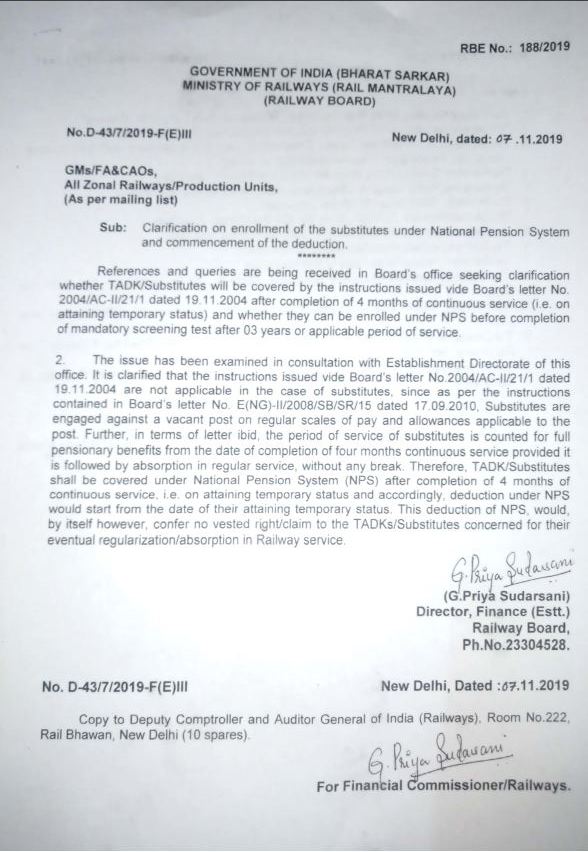 NPS enrollment of Railways TADKs/Substitutes and commencement of the deduction

Sub : Clarification on enrollment of the substitutes under National Pension System and commencement of the deduction.

References and queries are being received in Board’s office seeking clarification whether TADK/Substitutes will be covered by the instructions issued vide Board’s letter No.2004/AC-II/21/1 dated 19.11.2004 after completion of 4 months of continuous service (i.e. on attaining temporary status) and whether they can be enrolled under NPS before completion of mandatory screening test after 03 years or applicable period of service.

2. The issue has been examined in consultation with Establishment Directorate of this office. It is clarified that the instructions issued vide Board’s letter No.2004/AC-II/21/1 dated 19.11.2004 are not applicable in the case of substitutes. since as per the instructions contained in Board’s letter No. E(NG)-11/2008/SB/SR/15 dated 17.09.2010. Substitutes are engaged against a vacant post on regular scales of pay and allowances applicable to the post. Further. in terms of letter ibid, the period of service of substitutes is counted for full pensionary benefits from the date of completion of four months continuous service provided it is followed by absorption in regular service, without any break. Therefore. TADK/Substitutes shall be covered under National Pension System (NPS) after completion of 4 months of continuous service. i.e. on attaining temporary status and accordingly. deduction under NPS would start from the date of their attaining temporary status. This deduction of NPS, would, by itself however. confer no vested right/claim to the TADKs/Substitutes concerned for their eventual regularization/absorption in Railway service.

Loading...
Newer Post
Leave to a Railway servant who is unlikely to be fit to return to duty
Older Post
Consolidated Guidelines on MACP Scheme in 7th Pay Commission with illustration by DoPT dated 22.10.2019: Instructions