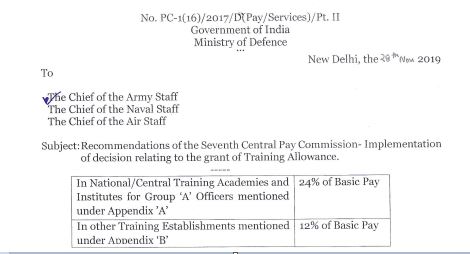 Subject: Recommendations of the Seventh Central Pay Commission – Implementation of decision relating to the grant of Training Allowance.

2. Admissibility of this allowance will be regulated in the following manner:

(i) Training allowance will be admissible only to faculties who join the training academies/ institutes/ establishments for imparting training for a specified period of time and are then likely to go back.

(ii) Training allowance will be admissible to faculty members excluding those not covered by these guidelines as indicated in sub para (v) without any ceiling and will not form part of pay as defined in F.R. 9(21), but will count for purpose of leave salary.

(iii) Training allowance will continue to be drawn for the period the trainer is on study or tour related to training activities.

(iv) Such training allowance will also be admissible to personnel who goes on deputation as a faculty member to an autonomous training institutions aided by the Central Government which inter-alia trains Group ‘A’ Government officials.

(vi) Deputation (Duty) Allowance will not be payable during the period in which the trainers are in receipt of Training allowance.

(vii) Standard cooling off period between tenures will apply.

3. The term ‘Basic Pay’ for the purpose of these orders refers to basic pay as defined in relevant Army/ Air Force Pay Rules and Navy Pay Regulations.

4. Institutes either discontinued/ disbanded from the list of training establishments mentioned under MoD letter No. 1(26)/97/VI/ D(Pay/Services) dated 29.02.2000 are mentioned under Appendix ‘C’

5. Officers/JCOs/ORs deployed on administrative/logistic duties m these Training institutes will not be entitled for Training Allowance.

(Arun Kumar)
Under Secretary to the Govt. of India

Institutes either discontinued/disbanded from the list of training establishments mentioned under MoD letter No. 1(26) / 97Nl/ D(Pay /Services) dated 29.02.2000